Trivarnam (Telugu: త్రివర్ణం) (Every Indian Heartbeat) is a first patriotic video album in Telugu, directed by Bulemoni Venkateshwarlu, produced by Pirati Kondalarao and Pirati Naveen in the banner of Surya Sellulloids in 2005. Trivarnam got appreciation from the President of India in 2005. 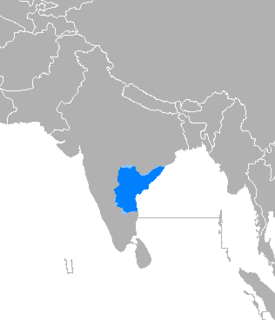 Telugu is a Dravidian language spoken in the Indian states of Andhra Pradesh, Telangana and the union territories of Puducherry (Yanam) by the Telugu people. It stands alongside Hindi, English and Bengali as one of the few languages with primary official language status in more than one Indian state. There are also significant linguistic minorities in neighbouring states. It is one of six languages designated a classical language of India by the country's government.

It was released worldwide through Aditya Music.

Trivarnam was a chart buster video album in the United States in 2005 in the Telugu music division. 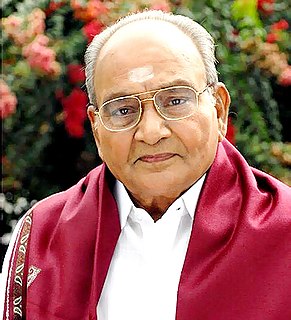 Kasinadhuni Viswanath is an Indian audiographer turned director, screenwriter and character actor known for his works in Telugu, Tamil, and Hindi cinema. He is a recipient of five National Film Awards, six state Nandi Awards, ten Filmfare Awards South, and a Bollywood Filmfare Award. In a film career spanning sixty years, Viswanath has directed fifty three feature films in a variety of genres, including films based on performing arts, visual arts, and aesthetics.

Veturi Sundararama Murthy, popularly known as Veturi, was a Telugu writer mostly popular for his film songs. His career in the Telugu film industry spanned more than four decades. He was highly admired and cherished for his deep and meaningful lyrics in Telugu songs. He was considered an inspiration by many lyricists.

Meka Srikanth is an Indian film actor, who is known for works predominantly in Telugu cinema. He has received two state Nandi Awards, and one Filmfare Award South. He has starred in films like Swarabhishekam, which won the National Film Award for Best Feature Film in Telugu for 2004, and Virodhi, premiered in Indian panorama section, at the 2011 International Film Festival of India. Sri Rama Rajyam also had a special screening at International Film Festival of India on 28 November 2011.

Chandrabose is an Indian lyricist who writes songs for Tollywood films. He was also a playback singer at the start of his motion picture career. He has won a number of awards as best lyricist. 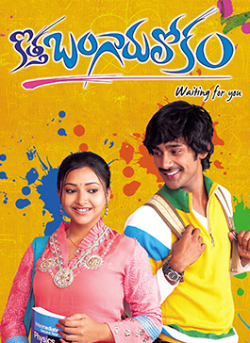 Bulemoni Venkateshwarlu is an Indian businessman, chairman and managing director of Kushmanv Web Technologies Private Limited. He also a Telugu Cinema journalist, writer and a film director. He is the son of B. Kanakappa, who is a Government Primary School teacher. Venkateshwarlu was noted journalist, and he is into media career from 1990. In recognition for his efforts in researching films he has received the Nandi Award twice as Best Book Writer and Journalist by the government of Andhra Pradesh. He was unanimously elected as president of Writers Guild of India

MK Balaji is an Indian playback singer, song writer and a Television host from Chennai, Tamil Nadu. As a playback singer he has sung more than 100 songs in Tamil, Telugu and Kannada. His first song a lyricist was for the movie Sethupathi. He has hosted popular TV shows in Star Vijay and Zee Tamil

Gangmaster is a 1994 Telugu film directed by B. Gopal. It has music composed by A. R. Rahman. It was dubbed into Tamil with the title Manitha Manitha. The film was a remake of Hindi film Sir. 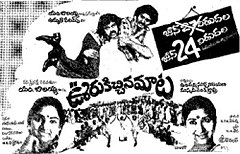 Amara Deepam is a 1977 Telugu drama film directed by K. Raghavendra Rao. The film stars Krishnam Raju, Jayasudha and Murali Mohan in the lead roles. The film is a remake of the Tamil film Dheepam (1977), starring Sivaji Ganesan, which itself was a remake of the Malayalam film Theekkanal. Krishnam Raju received the Filmfare Best Actor Award (Telugu) and Nandi Award for Best Actor.

Raja is a 1999 Telugu family, romantic drama film directed by Muppalaneni Shiva and produced by R. B. Choudary under Super Good Films. It stars Venkatesh, Soundarya and Abbas in pivotal roles, with original soundtrack by S. A. Rajkumar. The film was a Sensational Hit at the box office. The film won three Filmfare South Awards in Best Film, Best Actress and Best Music Director categories. The film is a remake of the 1998 Tamil movie Unnidathil Ennai Koduthen, starring Karthik and Roja in the lead roles, with Ajith Kumar in a guest appearance and it was remade in Odia as Mo Duniya Tu Hi Tu, starring Anubhav and Barsha Priyadarshini.

Parthasarathy Nemani, popularly known as Parthu, is an Indian Telugu playback singer in Tollywood with rich classical music background. Parthu has rendered more than 100 film songs and sung more than 2000 private songs in Telugu, Tamil, Hindi and Kannada. Parthu is one of the very few Telugu playback singers who performed on five continents.

Pattabhishekam is a 1985 Telugu romantic film, produced by Nandamuri Harikrishna under the Ramakrishna Cine Studios banner and directed by K. Raghavendra Rao. It stars Nandamuri Balakrishna, Vijayashanti in the lead roles and music composed by Chakravarthy.

Kurukshetram is a 1977 Telugu mythological film produced by A. S. R. Anjaneyulu and directed by Kamalakara Kameswara Rao. It stars Krishna, Sobhan Babu, Krishnam Raju and Kaikala Satyanarayana in the lead roles while Jamuna, Vijaya Nirmala, Anjali Devi and Gummadi Venkateswara Rao played other important roles. During the shooting in Rajasthan the producer ran out of money and superstar Krishna became producer of the movie.

Tiragabadda Telugubidda is a 1988 Telugu Action film, produced by Nandamuri Harikrishna under the Tejaswi Productions banner and directed by A. Kodandarami Reddy. It stars Nandamuri Balakrishna, Bhanupriya in the lead roles and music composed by Chakravarthy.