Trivelino (or Trivelin) is a zanni character of the commedia dell'arte .

Trivelino is similar to Arlecchino, like him, he represents a stupid servant or valet. [1] Trivelino is also similar to Scapin, Brighella, or Mezzetin.[ citation needed ]

This character was introduced in France by Domenico Locatelli in the third quarter of the 17th century. Pierre de Marivaux later used him in several of his comedies including Arlequin poli par l'amour , L'Île des esclaves and La Double Inconstance .

Zanni, Zani or Zane is a character type of Commedia dell'arte best known as an astute servant and a trickster. The Zanni comes from the countryside and is known to be a "dispossessed immigrant worker". Through time, the Zanni grew to be a popular figure who was first seen in commedia as early as the 14th century. The English word zany derives from this persona.

Brighella is a comic, masked character from the theatre style Commedia dell'arte. His early costume consisted of loosely fitting, white smock and pants with green trim and was often equipped with a batocio or slap stick, or else with a wooden sword. Later he took to wearing a sort of livery with a matching cape. He wore a greenish half-mask displaying a look of preternatural lust and greed. It is distinguished by a hook nose and thick lips, along with a thick twirled mustache to give him an offensive characteristic. He evolved out of the general Zanni, as evidenced by his costume, and came into his own around the start of the 16th century. 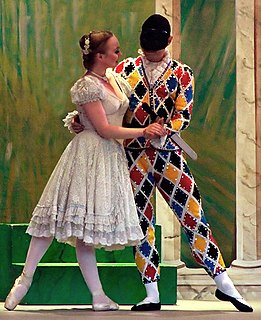 Columbina is a stock character in the Commedia dell'Arte. She is Harlequin's mistress, a comic servant playing the tricky slave type, and wife of Pierrot. Rudlin and Crick use the Italian spelling Colombina in Commedia dell'arte: A Handbook for Troupes.

La Ruffiana is an older female character of the Commedia dell'Arte with a shady past or who used to be a prostitute. She is used most often in relationship to the vecchi of which group she is a nominal member. Ruffiana is most often romantically involved with Pantalone, though his love may easily be unrequited if it suits the plot. She is generally described as being talkative/gossipy, sneaky, and mischievous, but deep down is actually kind. She has been described as an "outsider" that always mixes things up and causes trouble for the rest of the characters. "Her quips reek of garlic"

Gli Innamorati were stock characters within the theatre style known as commedia dell'arte, which appeared in 16th century Italy. In the plays, everything revolved around the Lovers in some regard. These dramatic and posh characters were present within commedia plays for the sole purpose of being in love with one another, and moreover, with themselves. These characters move elegantly and smoothly, and their young faces are unmasked unlike other commedia dell'arte characters. Despite facing many obstacles, the Lovers were always united by the end. 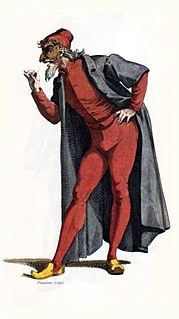 Pantalone[pantaˈloːne], spelled Pantaloon in English, is one of the most important principal characters found in commedia dell'arte. With his exceptional greed and status at the top of the social order, Pantalone is "money" in the commedia world. His full name, including family name, is Pantalon de' Bisognosi, Italian for 'Pantalone of the Needy'.

Il Capitano is one of the four stock characters of Commedia dell'arte. He most likely was never a "Captain" but rather appropriated the name for himself. 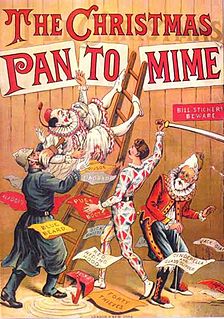 Harlequinade is a British comic theatrical genre, defined by the Oxford English Dictionary as "that part of a pantomime in which the harlequin and clown play the principal parts". It developed in England between the 17th and mid-19th centuries. It was originally a slapstick adaptation or variant of the Commedia dell'arte, which originated in Italy and reached its apogee there in the 16th and 17th centuries. The story of the Harlequinade revolves around a comic incident in the lives of its five main characters: Harlequin, who loves Columbine; Columbine's greedy and foolish father Pantaloon, who tries to separate the lovers in league with the mischievous Clown; and the servant, Pierrot, usually involving chaotic chase scenes with a bumbling policeman. 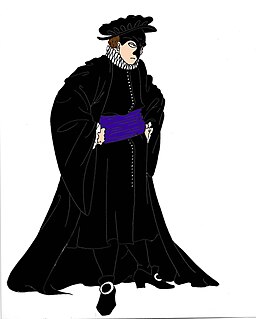 Pulcinella is a classical character that originated in commedia dell'arte of the 17th century and became a stock character in Neapolitan puppetry. Pulcinella's versatility in status and attitude has captivated audiences worldwide and kept the character popular in countless forms since his introduction to commedia dell'arte by Silvio Fiorillo in 1620.

Grammelot is an imitation of language used in satirical theatre, an ad hoc gibberish that uses prosody along with macaronic and onomatopoeic elements to convey emotional and other meaning, and used in association with mime and mimicry. The satirical use of such a format may date back to the 16th century commedia dell'arte; the group of cognate terms appears to belong to the 20th century. 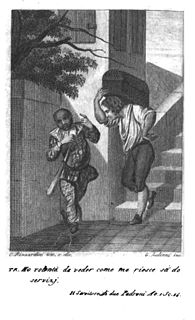 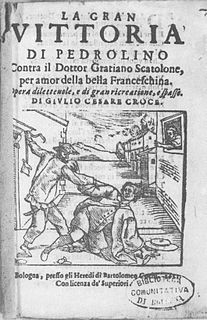 Pedrolino is a primo zanni, or comic servant, of the Commedia dell'Arte; the name is a hypocorism of Pedro (Peter), via the suffix -lino. The character made its first appearance in the last quarter of the 16th century, apparently as the invention of the actor with whom the role was to be long identified, Giovanni Pellesini. Contemporary illustrations suggest that his white blouse and trousers constituted "a variant of the typical zanni suit", and his Bergamasque dialect marked him as a member of the "low" rustic class. But if his costume and social station were without distinction, his dramatic role was certainly not: as a multifaceted "first" zanni, his character was—and still is—rich in comic incongruities.

Alazṓn is one of three stock characters in comedy of the theatre of ancient Greece. He is the opponent of the eirôn. The alazṓn is an impostor that sees himself as greater than he actually is. The senex iratus and the miles gloriosus are two types of alazṓn.

Burattino, also Burrattino or Burratino, is a minor commedia dell'arte character of the zanni class.

Le Médecin volant is a French play by Molière, and his first, written in 1645. The date of its actual premiere is unknown, but its Paris premiere took place on 18 April 1659. Parts of the play were later reproduced in L'Amour médecin, and Le Médecin malgré lui. It is composed of 15 scenes and has seven characters largely based on stock commedia dell'arte roles: 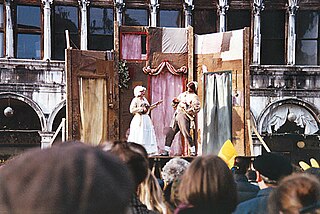 Commedia dell'arte masks are one of the most integral aspects of each stock character. Each mask design is paired with a specific character based on its appearance and tradition. Masks were originally all made of leather, but now more commonly made of neoprene. The Commedia masks must show emotion and intelligence as they are covering the face which is the main place emotion can be seen on someone. Masks should be an extension of an actor and their costume, hair and accessories. A mask creates a completely different face for the person that is wearing it. Mask, in Commedia dell'arte speaks of the types of characters that each represents and includes all of the characters including the lovers. It is almost as speaking to the character rather than the masks, saying that they are a type that is unchanged.