Trix Express was the main model train product range of the Trix of Nuremberg Germany, currently owned by the Märklin company of Göppingen Germany.

The Trix Express system was first introduced at the Leipzig exhibition in the spring of 1935. It was the first reasonable priced H0 (Half Zero) Table-Top model train system using 16.5mm track (1:87). In Germany the system was marketed as Trix Express. After the Nazis forced the Jewish owners of the company Stefan Bing and others to sell their shares, they moved to Britain and founded the Trix Ltd London, which initially used the same system. This brand was called TTR - TRIX TWIN RAILWAY.

Like other systems introduced before WW2 it used a third (centre) rail as a means to supply current to the models. Unlike other systems, such as Märklin H0 (still produced today) and Hornby Railways, the outer tracks were insulated, using the centre rail as a common pick-up. This allowed the independent operation of two model engines on the same track and even three if overhead catenary wires were used.

The original system used 14V AC power. The German company changed to 14V DC in 1953 and used the third rail system until 2003 when the last models were produced under the auspices of the Märklin company. Because of a great lobby to Märklin, Trix Express has been re-initiated in 2013 by producing new rolling stock. The British Trix Twin company changed to DC in 1956, abandoned the three rail system in the early 1960s and disappeared altogether after a number of take-overs and mergers during the 1970s.

Apart from the centre pick-up, the Trix Express system also retained the larger wheel flanges, customary in the 1930s, right till the recent end, making derailments rather uncommon, but at the same time making their rolling stock incompatible with more modern two-rail NEM systems.

The Trix Express system still has a large following in countries such as United Kingdom, Germany and the Netherlands with active clubs and is readily available on eBay.

Large scale or G scale is a track gauge for model railways which, because of its size and durability, is often used outdoors. These garden railways use a fixed track gauge of 45 millimetres (1.75 in) to represent a range of rail transport modelling scales between narrow gauge (~1:13‒1:19‒1:20), metre gauge (1:22.5), Playmobil trains (~1:24), and standard gauge (~1:29–1:32). These scales all use the same track and wheel profiles, allowing different scales of models to be operated together. 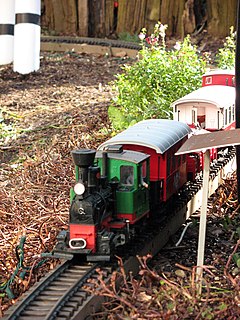 LGB stands for Lehmann Gross Bahn - the "Lehmann Big Train" in German. Made by Ernst Paul Lehmann Patentwerk in Nuremberg, Germany, since 1968 and by Märklin since 2007, it is the most popular garden railway model in Europe, although there are also many models of U.S. and Canadian prototypes. LGB caused a revival of garden model railroading in the United States when it was introduced. LGB is sold in North America through Wm. K. Walthers, who took over from Ernst Paul Lehmann's subsidiary, LGB of America, when Märklin bought the LGB assets. Most of the European prototypes were manufactured in Germany, while much of the North American rolling stock was made in China. Production is now located in Hungary.

OO gauge or OO scale is the most popular standard-gauge model railway standard in the United Kingdom despite being virtually unknown in other countries. This track gauge is one of several 4 mm-scale standards used, but it is the only one to be served by the major manufacturers. Unfortunately, the OO track gauge of 16.5 mm is actually incorrect for 4 mm scale, giving a track gauge equivalent of 4 ft 1½ in instead of 4 ft 8½ in. However, since the 1960s, other gauges in the same scale have arisen to reflect the desire of some modellers for greater scale accuracy.

A third rail, also known as a live rail, electric rail or conductor rail, is a method of providing electric power to a railway locomotive or train, through a semi-continuous rigid conductor placed alongside or between the rails of a railway track. It is used typically in a mass transit or rapid transit system, which has alignments in its own corridors, fully or almost fully segregated from the outside environment. Third rail systems are always supplied from direct current electricity.

O scale is a scale commonly used for toy trains and rail transport modelling. Originally introduced by German toy manufacturer Märklin around 1900, by the 1930s three-rail alternating current O gauge was the most common model railroad scale in the United States and remained so until the early 1960s. In Europe, its popularity declined before World War II due to the introduction of smaller scales. 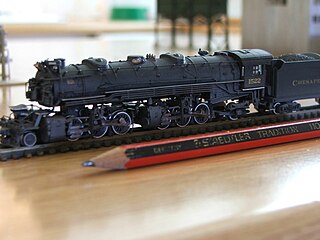 N scale is a popular model railway scale. Depending upon the manufacturer, the scale ranges from 1∶148 to 1∶160. In all cases, the gauge is 9 mm or 0.354 in. The term N gauge refers to the track dimensions, but in the United Kingdom in particular British N gauge refers to a 1∶148 scale with 1∶160 track gauge modelling. The terms N scale and N gauge are often inaccurately used interchangeably, as scale is defined as ratio or proportion of the model, and gauge only as a distance between rails. The scale 1∶148 defines the rail-to-rail gauge equal to 9 mm exactly, so when calculating the rail or track use 1∶160 and for engines and car wheel base use 1∶148.

Standard Gauge, also known as wide gauge, was an early model railway and toy train rail gauge, introduced in the United States in 1906 by Lionel Corporation. As it was a toy standard, rather than a scale modeling standard, the actual scale of Standard Gauge locomotives and rolling stock varied. It ran on three-rail track whose running rails were 2 1⁄8 in apart. 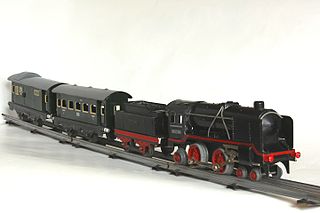 A toy train is a toy that represents a train. It is distinguished from a model train by an emphasis on low cost and durability, rather than scale modeling. A toy train can be as simple as a pull toy that does not even run on track, or it might be operated by clockwork or a battery. Many of today's model trains might be considered as toy ones as well, providing they are not strictly scale ones in favor of a robustness appropriate for children. 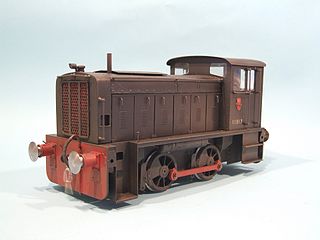 Hornby Railways is a British model railway brand. Its roots date back to 1901 in Liverpool, when founder Frank Hornby received a patent for his Meccano construction toy. The first clockwork train was produced in 1920. In 1938, Hornby launched its first 00 gauge train. In 1964, Hornby and Meccano were bought by their competitor, Tri-ang, and sold when Tri-ang went into receivership. Hornby Railways became independent again in the 1980s, and became listed on the London Stock Exchange, but due to recent financial troubles, reported in June 2017, is presently majority owned by turnaround specialist Phoenix Asset Management.

The use of a third rail in rail transport modelling is a technique that was once applied, in order to facilitate easier wiring.

Fleischmann is a German manufacturer of model railway products. Fleischmann was founded in Nuremberg in 1887 by Jean Fleischmann, as a toy company. Their first model train, in O scale, was produced in 1938. Their first H0 scale products were introduced in 1952 and their N scale "Piccolo" product line in 1969.

Trix is a German company that originally made Trix metal construction sets. one of its co-founders was Stephan Bing, the son of the pioneer toy-maker industrialist Ignaz Bing. In 1935 the company began producing the electrically powered model trains that it became famous for, under the Trix Express label. Prior to the outbreak of World War II the company produced a small range of AC powered three rail loco models running on bakelite rails.

Wooden toy trains are toy trains that run on a wooden track system with grooves to guide the wheels of the rolling stock. While the trains, tracks and scenery accessories are made mainly of wood, the engines and cars connect to each other using metal hooks or small magnets, and some use plastic wheels mounted on metal axles. Some trains are made to resemble anthropomorphical, fictional, and prototypical railroad equipment.