Tiryancha(तिर्यंच) is the term used for plants and animals (including insects) in Jain philosophy. [1]

Jainism, traditionally known as Jain Dharma, is an ancient Indian religion. It is one of the oldest Indian religions. The three main pillars of Jainism are ahiṃsā (non-violence), anekāntavāda (non-absolutism), and aparigraha (non-attachment).

Saṃsāra (संसार) is a Sanskrit/Pali word that means "world". It is also the concept of rebirth and "cyclicality of all life, matter, existence", a fundamental belief of most Indian religions. Popularly, it is the cycle of death and rebirth. Saṃsāra is sometimes referred to with terms or phrases such as transmigration, karmic cycle, reincarnation or Punarjanman, and "cycle of aimless drifting, wandering or mundane existence".

Kundakunda was a Digambara Jain monk and philosopher, who likely lived in the 2nd CE century CE or later.

In Jainism, Pudgala is one of the six Dravyas, or aspects of reality that fabricate the world we live in. The six dravyas include the jiva and the fivefold divisions of ajiva (non-living) category: dharma (motion), adharma (rest), akasha (space), pudgala (matter) and kala (time). Pudgala, like other dravyas except kala is called astikaya in the sense that it occupies space.

In Jainism cosmology, the Nigoda is a realm existing in which the lowest forms of invisible life reside in endless numbers, and without any hope of release by self-effort. Jain scriptures describe nigodas which are microorganisms living in large clusters, having only one sense, having a very short life and are said to pervade each and every part of universe, even in tissues of plants and flesh of animals. The Nigoda exists in contrast to the Supreme Abode, also located at the Siddhashila where liberated souls exist in omnisciencent and eternal bliss. According to Jain tradition, it is said that when a human being achieves liberation (Moksha) or if a human would be born as a Nigoda due to karma, another from the Nigoda is given the potential of self-effort and hope.

Acharya Shri Shantisagar (1872–1955) was an Indian monk of the Digambara school of the Jain faith. He was the first Acharya (preceptor) and a leader of his sect in the 20th century. Shantisagar revived the teaching and practice of traditional Digambara practices in North India. He was lustrated as a kshullaka into the Sangha by Devappa (Devakirti) Swami. He took his ailaka before an image of the Tirthankara Neminatha. In about 1920, Shantisagar became a full muni (monk) of the Digambara sect of Jainism. In 1922, at Yarnal village, Belgaum district, Karnataka, he was given the name "Shanti Sagara".

Karma is the basic principle within an overarching psycho-cosmology in Jainism. Human moral actions form the basis of the transmigration of the soul. The soul is constrained to a cycle of rebirth, trapped within the temporal world, until it finally achieves liberation. Liberation is achieved by following a path of purification.

Kevala jñāna or Keval gyāna means omniscience in Jainism and is roughly translated as complete understanding or supreme wisdom.

Sanskrit moksha or Prakrit mokkha refers to the liberation or salvation of a soul from saṃsāra, the cycle of birth and death. It is a blissful state of existence of a soul, attained after the destruction of all karmic bonds. A liberated soul is said to have attained its true and pristine nature of infinite bliss, infinite knowledge and infinite perception. Such a soul is called siddha and is revered in Jainism.

Mulachara is a Jain text composed by Acharya Vattakera of the Digambara tradition, around 150 CE. Mulachara discusses anagara-dharma – the conduct of a Digambara monk. It consists twelve chapters and 1,243 verses on. It is also called Digambara Acharanga.

Guṇasthāna are the fourteen stages of spiritual development and growth through which a soul gradually passes before it attains moksha (liberation). According to Jainism, it is a state of soul from a complete dependence on karma to the state of complete dissociation from it. Here the word virtue does not mean an ordinary moral quality, but it stands for the nature of soul — knowledge, belief and conduct.

Jīva or Atman is a philosophical term used within Jainism to identify the soul. As per Jain cosmology, jīva or soul is the principle of sentience and is one of the tattvas or one of the fundamental substances forming part of the universe. The Jain metaphysics, states Jagmanderlal Jaini, divides the universe into two independent, everlasting, co-existing and uncreated categories called the jiva (soul) and the ajiva. This basic premise of Jainism makes it a dualistic philosophy. The jiva, according to Jainism, is an essential part of how the process of karma, rebirth and the process of liberation from rebirth works.

Padmanabh Shrivarma Jaini was an Indian born scholar of Jainism and Buddhism, living in Berkeley, California, United States. He was from a Digambar Jain family; however he was equally familiar with both the Digambara and Svetambara forms of Jainism. He has taught at the Banaras Hindu University, the School of Oriental and African Studies (SOAS), the University of Michigan at Ann Arbor and at the University of California at Berkeley, from which he retired in 1994. Professor Jaini was the author of several books and papers. His best known work is The Jaina Path of Purification (1979). Some of his major articles have been published under these titles: The Collected Papers on Jaina Studies (2000) and Collected Papers on Buddhist Studies (2001). He died on 25 May 2021 at Berkeley at age 97. 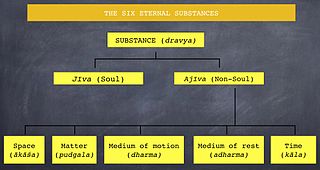 Dravya means substance or entity. According to the Jain philosophy, the universe is made up of six eternal substances: sentient beings or souls (jīva), non-sentient substance or matter (pudgala), principle of motion (dharma), the principle of rest (adharma), space (ākāśa) and time (kāla). The latter five are united as the ajiva. As per the Sanskrit etymology, dravya means substances or entity, but it may also mean real or fundamental categories.

According to the Jain cosmology, the śalākapuruṣa "illustrious or worthy persons" are 63 illustrious beings who appear during each half-time cycle. They are also known as the triṣaṣṭiśalākāpuruṣa. The Jain universal or legendary history is a compilation of the deeds of these illustrious persons. Their life stories are said to be most inspiring.

Simandhara is a Tīrthaṅkara, an arihant, who is said to be currently living in another world in the Jain cosmological universe.

Pravachanasara, is a text composed by Jain monk, Kundakunda, in the second century CE or later. The title means "Essence of the Doctrine" or "Essence of the Scripture", and it largely deals with the correct ascetic and spiritual behavior based on his dualism premise. Kundakunda provides a rationale for nudity among Digambara monks in this text, stating that the duality of self and of others means "neither I belong to others, nor others belong to me, therefore nothing is mine and the ideal way for a monk to live is the way he was born". The text is written in Prakrit language, and it consists of three chapters and 275 verses. 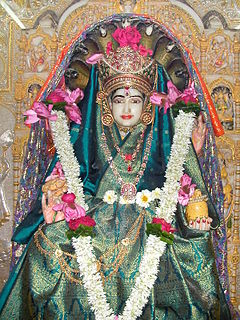 The sanskrit word Deva has multiple meanings in Jainism. In many places the word has been used to refer to the Tirthankaras. But in common usage it is used to refer to the heavenly beings. These beings are born instantaneously in special beds without any parents just like hell beings (naraki). According to Jain texts, clairvoyance based on birth is possessed by the celestial beings.

Uttarapurana is a Jain text composed by Acharya Gunabhadra in the 9th century CE. According to the Digambara Uttarapurana text, Mahavira was born in Kundpur in the Kingdom of the Videhas.