Trobar clus (Occitan pronunciation:  [tɾuˈβa ˈklys] ), or closed form, was a complex and obscure style of poetry used by troubadours for their more discerning audiences, and it was only truly appreciated by an elite few. It was developed extensively by Marcabru and Arnaut Daniel, but by 1200 its inaccessibility had led to its disappearance. Among the imitators of Marcabru were Alegret and Marcoat, who claimed himself to write vers contradizentz (contradictory verses), indicative of the incomprehensibility of the trobar clus style. [1] Below is a sample of the style from Marcoat's sirventes Mentre m'obri eis huisel, wherein the poet himself remarks on his moz clus (closed words):

Among the late twelfth-century practitionars of trobar clus was Peire d'Alvernhe, an imitator of Marcabru, while Raimbaut d'Aurenga of the trobar ric style was influenced by Marcoat. The only trobairitz (female troubadour) to use the trobar clus with mastery was Lombarda around 1216. 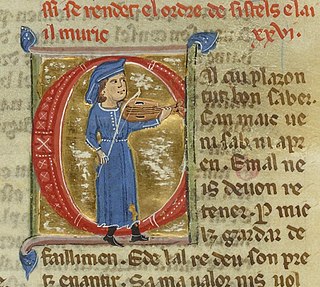 Closed form may refer to: 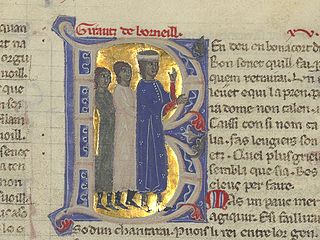 Rigaut de Berbezilh was a troubadour of the petty nobility of Saintonge. He was a great influence on the Sicilian School and is quoted in the Roman de la Rose. About fifteen of his poems survive, including one planh and nine or ten cansos. His name is sometimes given as Richart or Richartz. 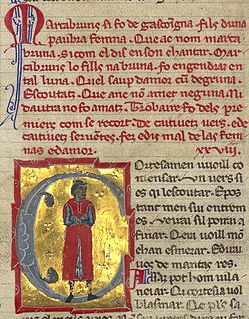 Marcabru is one of the earliest troubadours whose poems are known. There is no certain information about him; the two vidas attached to his poems tell different stories, and both are evidently built on hints in the poems; not on independent information.

The trobar leu, or light style of poetry, was the most popular style used by the troubadours. Its accessibility gave it a wide audience.

Bernart Marti was a troubadour, composing poems and satires in Occitan, in the mid twelfth century. They show that he was influenced by his contemporaries Marcabru and knew Peire d'Alvernha, whom, in one poem, he accused of abandoning holy orders. Along with Peire, Gavaudan, and Bernart de Venzac he is sometimes placed in a hypothetical Marcabrunian school. His work is "enigmatic, ironic, and satiric", but has no following among later troubadours, according to Gaunt and Kay.

Marcoat was a minor Gascon troubadour and joglar who flourished in the mid twelfth century. He is often cited in connexion with Eleanor of Aquitaine and is placed in a hypothetical "school" of poetry which includes Bernart de Ventadorn, Marcabru, Cercamon, Jaufre Rudel, Peire Rogier, and Peire de Valeria among others. Of all his works, only two sirventes survive: Mentre m'obri eis huisel and Una re.us dirai, en Serra. 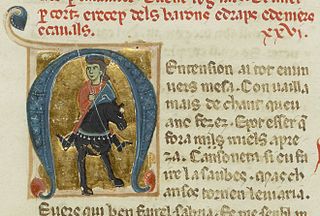 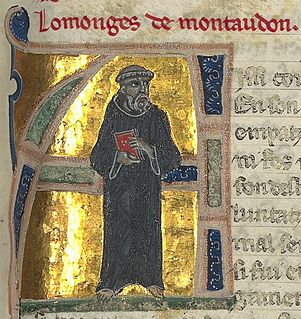 The (Lo) Monge de Montaudon, born Pèire de Vic, was a nobleman, monk, and troubadour from the Auvergne, born at the castle of Vic-sur-Cère near Aurillac, where he became a Benedictine monk around 1180. According to his vida, he composed "couplets while he was in the monastery and sirventes on subjects that were popular in the region."

Blacasset, Blacassetz, Blacssetz, or Blachessetz was a Provençal troubadour of the noble family of the Blacas, lords of Aulps, in the Empire. He was probably a son of the troubadour Blacatz, as his vida alleges, though this has come into doubt. He was also distantly related to Charles I of Naples and Raymond Berengar IV of Provence. According to his vida, he was like his father in merit, good deeds, and munificence, and also reputed to be a good lover. 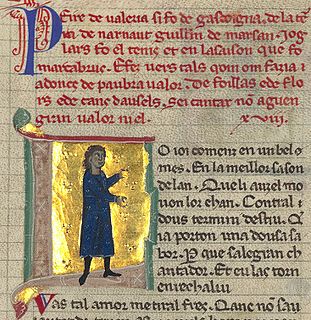 Peire de Valeira, Valeria, or Valera was a Gascon troubadour. Since troubadour poetry probably originated in northwest Aquitaine and first spread—within a generation—south into Gascony, Peire was one of the earliest troubadours. Only two of his poems survive, one canso and one cobla.

Gau(s)bert Amiel or Gausbertz Amiels was a 13th-century Gascon troubadour. His only surviving song (canso) is Breu vers per tal que meins y poing, a humorous satire of contemporary courtly poetry. This lone example of Gausbert's work is well represented in the manuscripts, however, appearing six, labelled A, D, I, K, N, and V. The poem is only ascribed to him in MS "D", where a marginal note names "Gibert Amiels" as the author. Based on the manuscripts, the poem must have been written between 1200 and 1254.

Bernart de Venzac was an obscure troubadour from Venzac near Rodez in the Rouergue. He wrote in the Marcabrunian style, leaving behind five moralising pieces and one religious alba. Two of his works were confused by copyists with those of Marcabru in some manuscripts.

Gavaudan was a troubadour and hired soldier at the courts of both Raymond V and Raymond VI of Toulouse and later on in Castile. He was from Gévaudan, as his name implies. He wrote moralising lyrics, either religious or political, and ten of his works survive, including five sirventes, two pastorelas, one canso, one planh for an anonymous domna (lady), and one Crusade song. He is sometimes clumped in a primitive Marcabrunian "school" of poetry alongside Bernart Marti, Bernart de Venzac, and Peire d'Alvernhe. He developed a hermetic style, combining elements of the trobar ric and trobar clus.

Aldric or Audric del Vilar was the twelfth-century lord of Auvillar and a troubadour. According to the vida of Marcabru, he raised the young Marcabru. This may in fact be derived by Marcabru's biographer from an exchange of satiric songs between the two, beginning with Audric's "Tot a estru" (16b.1), to which Marcabru responded with "Seigner n'Audric" (293.43). Audric may have been originally writing in response to Marcabru's gap "D'aisso lau Dieu". The whole exchange revolves around Marcabru's claim that he will accept bread from a fool so long as it lasts. On the other hand, both of Marcabru's pieces, which share Audric's metrical form, may be responses to Audric. Audric introduced the nickname Pan-Perdut (Breadless) for Marcabru.