Trocadero, also known as Troca, [1] is an apple and orange flavoured Swedish soda containing caffeine. It was launched in Sweden in the summer of 1953 by Saturnus AB in Malmö, [2] Sweden. Trocadero has been especially popular in Norrland, the northern part of Sweden, and has therefore been called the "national beverage of Norrland". [2] [3]

Trocadero was introduced by Nils-Håkan Håkansson at Saturnus AB, and according to his grandson Edward Liepe, the name Trocadero comes from either Place du Trocadéro or Café du Trocadéro, both located in Paris, where it is pronounced with stress on the final o, but among Swedes drinking Trocadero the stress has generally been on e. However, the French name goes back to Isla del Trocadero in Spain, and in Spanish it is pronounced like in Swedish.

The same year Trocadero was introduced, the ban of cola drinks was lifted in Sweden. Both Coca-Cola and Cuba Cola (the latter also brewed by Saturnus) were introduced to the market. [3] For a long time, Trocadero was the only soda, except from cola, to contain caffeine.

Saturnus eventually shifted focus and began selling essences for liquor and drink mixes. Along that line, they also began selling soda essences to other breweries instead of producing the soda themselves. Their production of Trocadero came to an end, and in 2006 they sold the brand to NordArom AB [4] who allowed selected breweries licensed manufacturing. Since 2017, the brand was acquired by Spendrups Bryggeri AB, but Hammars Bryggeri, Mora Bryggeri and Vasa bryggeri still had licensed manufacturing until late 2017 when Spendrups was made the only licensed manufacturer.

Trocadero can be also found as bulk confectionery. The green and yellow bottle is made from jelly and tastes like Trocadero. [5] [6] [7] [8] [9] Fagerströms Karamellfabrik in Hudiksvall [10] started producing and selling Trocadero hard candy in 2005. According to Trocadero's Facebook page, they are no longer in production. [11]

Cola is a carbonated soft drink flavored with vanilla, cinnamon, citrus oils and other flavorings. Cola became popular worldwide after pharmacist John Pemberton invented Coca-Cola, a trademarked brand, in 1886, which was later imitated by other manufacturers. Most colas contain caffeine, which was originally sourced from the kola nut, leading to the drink's name, though other sources are now also used. The original cola drink by Pemberton contained an extract from the coca plant as well. His non-alcoholic recipe was inspired by the coca wine of pharmacist Angelo Mariani, created in 1863.

7 Up is an American brand of lemon-lime-flavored non-caffeinated soft drink. The rights to the brand are held by Keurig Dr Pepper in the United States and by 7 Up international in the rest of the world. The U.S. version of the 7 Up logo includes a red-orange circle between the "7" and "Up"; this red-orange circle has been animated and used as a mascot for the brand as Cool Spot. Before that, the mascot was a fictional character named Fido Dido created by Joanna Ferrone and Sue Rose. He is used outside the U.S. for limited time retro cups, although the last time and location is not known. 7 Up competes primarily against The Coca-Cola Company's Sprite and PepsiCo's Sierra Mist. 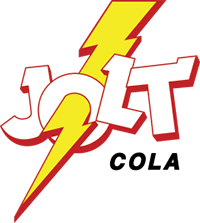 Jones Soda Co. is a beverage company based in Seattle. It bottles and distributes soft drinks, non-carbonated beverages, energy drinks, and candy.

Spezi is the brand name for a soft drink owned by Brauhaus Riegele in Augsburg, Germany.

Shasta Beverages is an American soft drink manufacturer that markets a value-priced soft drink line with a wide variety of soda flavors, as well as a few drink mixers, under the brand name Shasta. The company name is derived from Mount Shasta in northern California and the associated Shasta Springs.

Mezzo Mix is a product of The Coca-Cola Company, first introduced in Germany in 1973. It is a mixture of orange soda and cola, a beverage popular in German-speaking countries, commonly known there as spezi, the generic trademark of the first brand of that type of soda.

Cuba Cola is a cola-flavoured soft drink produced in Sweden, bottled by Saturnus AB. It was introduced to the market in the summer of 1953 soon after cola drinks had become legal in Sweden, beating Coca-Cola by three months in Sweden.

Monster Beverage Corporation is an American beverage company that manufactures energy drinks including Monster Energy, Relentless and Burn. The company was originally founded as Hansen's in 1935 in Southern California, originally selling juice products. The company renamed itself as Monster Beverage in 2012, and then sold their Hansen's juices and sodas and their other non-energy drink brands to The Coca-Cola Company in 2015. 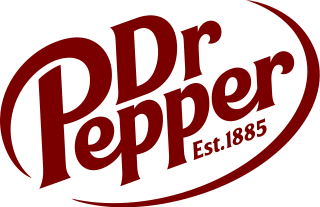 Dr Pepper is a carbonated soft drink. It was created in the 1880s by pharmacist Charles Alderton in Waco, Texas, and first served around 1885. Dr Pepper was first nationally marketed in the United States in 1904, and is now also sold in Europe, Asia, North and South America. In Australia, New Zealand and South Africa, Dr Pepper is sold as an imported good. Variants include Diet Dr Pepper and, beginning in the 2000s, a line of additional flavors.

Sun Crest. is a brand of flavored carbonated soft drink manufactured by The Dad's Root Beer Company, LLC. of Jasper, Indiana and owned by Hedinger Brands, LLC, except for 6 countries in Asia owned by The Monarch Beverage Company, Inc. of Atlanta, Georgia. Sun Crest Orange is currently available in fountain service and glass bottles in select markets in the U.S.

Club-Mate is a caffeinated carbonated mate-extract beverage made by the Loscher Brewery near Münchsteinach, Germany, which originated in 1924. Club-Mate has 200 mg of caffeine per L. Club-Mate has a relatively low sugar content of 50 g per L, and low calories compared to other beverages such as cola or most energy drinks.

Sunkist is a brand of primarily orange flavored soft drinks that launched in 1979.

Zevia is a Los Angeles-based company that produces soft drinks, organic tea, energy drinks and mixers sweetened with stevia. All Zevia products are zero-calorie, sugar-free, gluten-free, vegan, certified kosher, and certified by The Non-GMO Project. In June 2021, Zevia filed to go public with an IPO.

Hard soda, also referred to as flavored beer, adult soda, fermented soda, mature soda and alcohol soda, is a type of alcoholic beverage and craft beer that is manufactured in the style of a soft drink. It has gained recent prominence in the United States after the success of the Not Your Father's Root Beer brand manufactured by Small Town Brewery. As of late May 2016, at least 39 hard soda brands exist in the United States.