He entered the University of Copenhagen in 1858. After studying theology for a while he abandoned it for the study of history. From 1870-1875 he was assistant at the Danish Geheimarchiv. He was also appointed historiographer royal to the king of Denmark and Comptroller of the Order of the Dannebrog. [3] Later, he was an instructor in history at the military school at Copenhagen. In 1888 he was made full professor of history, and produced many profound volumes mostly devoted to the subject of Scandinavian history during the sixteenth century. [4]

Information Annual reports Troels Lund as the winner of the Nobel Prize in Literature for 1915, sharing the prize with three others, [5] however the Nobel website only lists one recipient for that year, not Lund. [6]

In 1913 a bust of Søren Kierkegaard was proposed. When the sculptor, Rikard Magnussen, proposed the idea to Lund, then in his eighties, he didn't support the proposal, he is quoted as saying, "But didn't you know what he was like? Soren Kierkegaard was a hunchback." [8] In the early 1900s biographers were interested in finding out what Kierkegaard was like on the outside. Kierkegaard also wrote much about Socrates. [9]

He related different stories about Kierkegaard. One story described Kierkegaard's playfulness: "He [Kierkegaard] was an unseen witness to a conversation between two poorhouse inmates. The first said: "It’s the devil that one never is happy." The other: "Nonsense! What’s happiness?" The first: "I would be if an angel dropped down from heaven and gave me a ‘blue one.’" This Kierkegaard could not resist. Ho took a five-dollar note (a "blue one") from his purse, stepped up, presented it with a deep bow, and disappeared without saying a word." [10] In 1854 he sat in on discussions between his mother, Anna Kathrine, and Kierkegaard about whether or not Mynster was a "real Christian or not", [11] he was 16 years old at the time. He visited Kierkegaard in the hospital [12] and was a witness to his burial. [13]

According to Lund, Kierkegaard spent half of his fortune on publishing his own works, he refused to accept interest on his money "on Old Testament grounds", and he also gave much of his money to the poor. [14] Kierkegaard says the same: "I almost never made a visit, and at home the rule was strictly observed to receive no one except the poor who came to seek help." [15]

Lund's first work, which appeared in 1871, an erudite biography of Socrates, gave him a great reputation among continental scholars. [4] His next important work, Historiske Skitser, did not appear until 1876, but after that time his activity was stupendous. In 1879 the first volume of his Danmarks og Norges Historie i Slutningen of det Xvi. Aarhundrede, a history of daily life in Denmark and Norway at the close of the 16th century, was published. His work said little about kings, armies and governments, but instead concentrated attention on the lives of the ordinary men and women of the age with which he deals. He used these common people to illustrate a vast body of documents previously neglected by the official historians. [3] 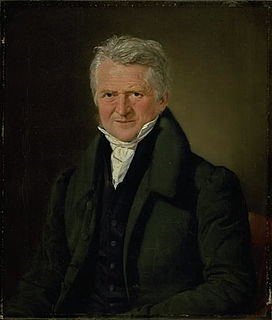 Christoffer Wilhelm Eckersberg was a Danish painter. He was born in Blåkrog in the Southern Jutland region of Denmark. He went on to lay the foundation for the period of art known as the Golden Age of Danish Painting, and is referred to as the "Father of Danish painting". 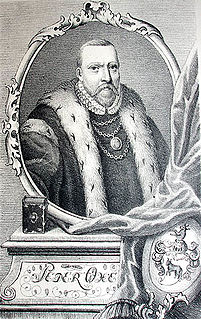 Peder Oxe was a Danish finance minister and Steward of the Realm.

The royal Frederiks Hospital was Denmark's first hospital in the present-day meaning of the word. It was founded by king Frederik V and financed by the earnings from the Norwegian Postal Service.

Johannes Sløk was a Danish philosopher, professor at the University of Aarhus and founder of "Idéhistorie", an interdisciplinary discipline mainly about writings pertaining to the ideas of Western culture since Antiquity. The concept is now the "Department of Philosophy and History of Ideas" a department under the faculty of humanities of Aarhus University. During the student rising of 1968, Sløk was forced to leave his position as professor at Idéhistorie, and the institute became oriented around the Marxist theory. Sløk instead was granted a special position at the Department of Theology, as professor of analytic theology. Sløk was one of the four Aarhus theologians and wrote a series of books on religion and its meaning to the modern man. 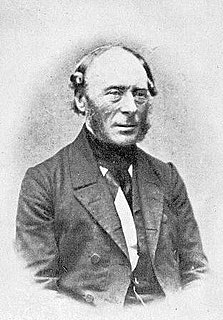 Magnús Eiríksson was an Icelandic theologian and a contemporary critic of Søren Aabye Kierkegaard (1813–1855) and Hans Lassen Martensen (1808–1884) in Copenhagen.

Christian Molbech was a Danish historian, literary critic, writer, and theater director. He was a professor of literature at the University of Copenhagen and was the founding editor of Historisk Tidsskrift

Adolph Peter Adler, was a Danish theologian, writer and a pastor in Hasle and Rutsker, on the island of Bornholm, Denmark.

Events from the year 1840 in Denmark.

Aksel Jørgensen ( was a Danish painter and wood engraver. He is also remembered for his years as a professor at the Royal Danish Academy where he instructed many Danish illustrators.

Niels Christian Kierkegaard was a Danish draftsman and lithographer. 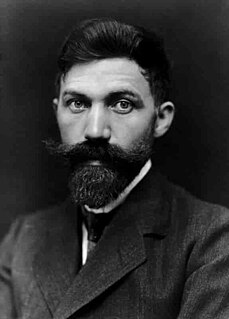 Vilhelm Peter Grønbech was a Danish cultural historian. He was professor of the history of religion at the University of Copenhagen and also had a great influence on Danish intellectual life, especially during and after World War II.

Johannes Hohlenberg (1881–1960) was a Danish author, artist and Anthroposophist. 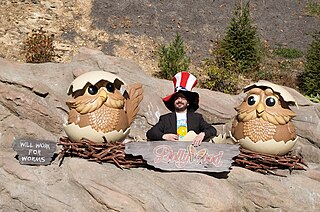 Anders Lund Madsen is a Danish journalist, comedian, author, radio personality and talkshow host. He hosts the talkshow "Det Nye Talkshow – med Anders Lund Madsen". Together with his brother Peter Lund Madsen, he has performed several shows at the Bellevue Theater and in Bremen Theater. Together they wrote the lyrics of the song "Avenuen", which was part of one of their shows performed by Trine Dyrholm. They have also participated in the quiz program Who Wants to Be a Millionaire? where they have twice won the main prize of 1 million kroner.

Rikard Magnussen was a Danish sculptor. 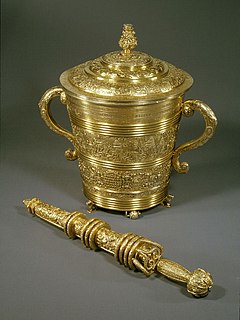 The Rose Flower Cup is a large silver-gilt communal drinking vessel, with two handles and a detached lid, holding six litres and weighting almost 6 kilograms (13 lb), presented to the later King Christian IV of Denmark at his christening in 1577 by his godfather Hans Skovgaard and his wife Anne Parsberg. The name refers to a verse inscribed on the exterior of the vessel. It is now in the collection of the National Museum of Denmark.