Kolomiets was born in Elisavetgrad, in the Kherson Governorate of the Russian Empire (present-day Ukraine). He fought in the Imperial Russian Army during World War I before joining the Red Army in the Russian Civil War. At the beginning of the Great Patriotic War, he was a major general. He fought against the forces of the Axis powers at Smolensk in 1941.

He was then assigned in July 1941 to the defence of Crimea as deputy commander of the 51st Army, of which he became commander in July 1942 shortly after the defeat in the Battle of the Kerch Peninsula against Manstein's troops. The remnants of Kolomiets' army were evacuated to the Kuban and assigned to the North Caucasus Front and then, from 1 August 1942, to the southern flank of the Stalingrad Front, which became the Southern eastern front on 6 August 1942.

Unable to stop the momentum of the 4th Panzer Army, he was demoted in October 1942 to become commander of the 54th Rifle Corps. He participated in this position in operations on the Mious, Donbass, around Melitopol, Belarus and East Prussia. [1]

Nikolai Ivanovich Krylov was a Russian Marshal of the Soviet Union. He was commander of the Strategic Missile Troops from 1963 to 1972.

The North Caucasian Front or North Caucasus Front was a major formation of the Red Army during the Second World War.

The 289th Rifle Division was an infantry division of the Soviet Union's Red Army, formed twice. The division was first formed in the summer of 1941, after the German invasion of the Soviet Union, and was sent to the front and destroyed in the Battle of Kiev in September. The division was formed a second time in October 1941 from the 5th Rifle Brigade, a separate infantry brigade fighting in the Continuation War against Finnish and German troops in Karelia. The new division spent most of the war in Karelia and in the summer of 1944 fought in the Vyborg–Petrozavodsk Offensive, which resulted in the end of the Continuation War in September. The division was stationed at Belomorsk in Karelia until its disbandment after the end of World War II in July 1946.

The 270th Rifle Division was a Red Army infantry division formed twice during World War II, in 1941 and 1942.

The 44th Army of the Soviet Union's Red Army was an army-level command active during World War II. Initially part of the Transcaucasian Front, its main actions included the Anglo-Soviet invasion of Iran and the Kerch amphibious landings, before being transferred to the Southern Front on 6 February 1943. There it took part in the Rostov, Donbas and Melitopol offensives. The army was disbanded in November 1943 and its units were transferred to other armies.

Vasily Nikolaevich Gordov was a Soviet Army colonel general and Hero of the Soviet Union. Gordov commanded the Stalingrad Front between July and September 1942.

The 34th Rifle Division was an infantry division of the Red Army during and before World War II. The division was formed in 1923. It fought in the Soviet invasion of Manchuria in August 1945. Postwar, it became the 11th Machine Gun Artillery Division.

Fyodor Petrovich Korol was a Red Army major general. Korol was drafted into the Imperial Russian Army and became an officer. He fought in World War I and fought with the Red Army during the Russian Civil War. Korol became a tactics instructor during the interwar period, and became commander of the 331st Rifle Division after the German invasion of the Soviet Union. After leading the division in the Battle of Moscow, Korol became commander of the 111th Tank Brigade. He was killed leading the brigade in late September 1942 on the outskirts of Voronezh by a German bomb.

The 32nd Rifle Corps was a corps of the Red Army during World War II, formed twice. Each formation was a distinct unit, unrelated to the other.

Vasily Stepanovich Popov was a Soviet general and Hero of the Soviet Union.

The 263rd Rifle Division was an infantry division of the Red Army during World War II.

The 4th Anti-Aircraft Artillery Division was an anti-aircraft artillery division of the Soviet Union's Red Army during World War II and the Soviet Army in the early postwar years. 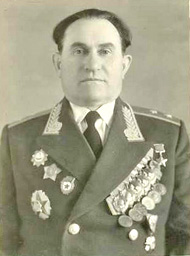 Karp Vasilyevich Sviridov was a Soviet Army lieutenant general and a Hero of the Soviet Union.

Kuzma Petrovich Trubnikov was a Soviet military commander, reaching the rank of colonel-general in the Red Army.

Vyacheslav Dmitrievich Tsvetaev was a Soviet general and Hero of the Soviet Union.

The 1941 formation of the 186th Rifle Division was based on the 1st Polar (Polyarnaya) Militia Division that had been formed in the Murmansk area early in September 1941. 1st Polar distinguished itself as part of 14th Army during the last stage of the offensive by Mountain Corps Norway toward Murmansk. As this came to an end the division was reformed as a regular Red Army rifle division and was designated as the 186th despite the existence of another division of the same number at that time. It continued to serve in Karelian Front through 1942 and into mid-1943, seeing little combat on this mostly static front apart from a partly successful offensive near Kestenga as part of 26th Army in April/May 1942. It remained in this Army until it was redesignated as the 2nd formation of the 205th Rifle Division in late June 1943.