Trofino is a local supermarket chain in Athens, Greece. As of 2006, it has 10 stores all of them located in the greater Athens area.

Champion was a supermarket chain that operated in France and owned by the international retailer Carrefour. There were also Champion supermarkets in Belgium, Spain, Poland, Greece, Turkey and Argentina.

Alfa-Beta Vassilopoulos or simply AB is a supermarket chain based in Greece.

Bazaar supermarkets is a discount supermarket and Cash & Carry chain in Greece. As of 2018, it operates around 150 retail stores and 8 Cash & Carry stores. It belongs to the Veroukas Group of companies.

Atlantic was a large supermarket chain in Greece. Atlantic supermarkets were founded in 1980 by Panayiotis Apostolou. Up to 1985 the company was a small chain with just 5 stores. After 1985 the company expanded rapidly through both organic growth and a number of acquisitions and takeovers. Atlantic was a public company and its shares used to trade in the Athens Stock Exchange from 2000 up to 2010. As of 2006–2007, the company had 182 stores nationwide and was the fifth largest supermarket chain in Greece as measured by market share. The company had also operated a franchise network of smaller stores branded ARISTA. Since 2009 the company had suffered from serious financial difficulties and eventually went into liquidation. The company ceased all trading as of 3 August 2011.

Veropoulos is a large retail group based in Greece. It holds the SPAR retail franchise for Greece. In Crete, Veropoulos operates stores under the name of Chalkiadakis. Outside Greece, Veropoulos operates supermarkets in the Republic of North Macedonia as Vero, and in Serbia as SuperVero. The company was established in 1973, when the first Veropoulos supermarket opened in Athens. As of 2012, the company owns 185 stores in Greece, 10 stores in the Republic of Macedonia and six hypermarkets in Serbia. In Greece, Veropoulos is the fourth-biggest supermarket chain in terms of market share. The firm belongs to the Veropoulos family who are also the founders of the company.

Metro S.A. is a Greek supermarket chain based in the Metamorfosi suburb of Athens, Greece.

Thanopoulos is a Greek supermarket chain situated in Athens. The company's history traces back to 1877 when Panayiotis Thanopoulos established the grocery store "Thanopoulos" in downtown Athens. Today (2006) the company has 3 stores, all of them located in the northern suburbs of Athens. The firm belongs to the Thanopoulos family.

Gristedes is a New York City-based chain of small supermarkets. It serves a mostly urban customer base.

Plus was a German multinational discount supermarket chain founded in 1972. It operated 2,840 stores in Germany with an approximate 27,000 employees and about 1,200 stores in several other European countries. The retail model was to sell low-cost groceries with no expense incurred for display or marketing of products. Groceries were stored in the shipping cartons they came in, rather than being stacked on shelves. In German advertising, the name "Plus" was used as a backronym for "Prima leben und sparen", featuring animated "little prices" as their mascot. 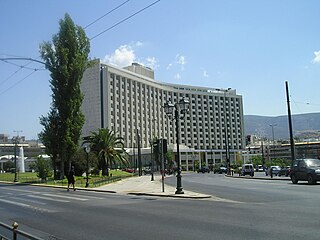 Hilton Athens is a hotel in Athens, Greece. It is on Vassilissis Sofias Avenue within the Hilton Area, near Syntagma Square, the Kolonaki and Pangrati neighbourhoods, and other of central Athens’ main tourist attractions. The hotel stands opposite the National Gallery of Athens and Evangelismos station. The hotel has an on-site restaurant and bar which are also used as meeting places by local Athenians as well as visitors to the city. It has a spa and a 25m by 15m outdoor swimming pool.

AEEK SYN.KA F.C., short for Athlitikí Énosi Ergazoménon Krítis SYN.KA is a Greek association football club based in the city of Chania on the island of Crete. The club currently competes in the Gamma Ethniki, the third tier of the Greek football league system, after winning its second regional Chania FCA A Division title.