The Trogfurt(h) Bridge (German : Trogfurther Brücke), also called the Great Trogfurt(h) Bridge ((Große) Trogfurt(h)er Brücke) [1] was an historical cultural monument in the Harz Mountains of Germany. It was built in 1739/40 as a stone bridge, blown up in 1945 and that same year replaced by a modern bridge. This became superfluous when the Königshütte Dam was constructed in 1956. [2] [3]

The name is comes from the Große Trogfurt, which in turn is derived from the Trog-/Tockweg, a road that crossed the River Bode, a tributary of the Saale, and which was mentioned for the first time in 919. [2] [3] .

The Trogfurt Bridge was built from rubble stone in the years 1739/40 [3] spanning the Bode at a ford on the Königsstieg ("King's Mountain Road"), which ran from Italy to Scandinavia and was one of the oldest German military and trade routes. The bridge was also used in the transportation of wood from the forest. The bridge stones probably came from the demolished watch tower of the former castle of Susenburg, which stood on a spur about 800 metres north-east of the bridge and probably served to protect the bridge. [2]

On 14 April 1945, just under a month before the end of the Second World War], the bridge was blown up by the SS. [2] [3] In the same year, a modern bridge made of reinforced concrete and wood was built. This became superfluous after the construction of the Königshütte Dam was completed on 24 August 1956, [2] the dam wall standing just a few metres to the east and thus below the old site of the bridge, which is now covered by water. The crown of the 18.2-metre-high dam wall (424.9 m above  sea level (NHN) ) now acts as the Bode crossing.

From the Trogfurth Bridge it is only a few hundred metres to the plateau of the Lange and the ruins of the castles of Königsburg, Trageburg and Susenburg.

The former Trogfurt Bridge (Trogfurter Brücke) is No. 42 in the system of checkpoints in the Harzer Wandernadel hiking network; the checkpoint is located at the southern end of the dam wall. [3] From there is a roughly 6 kilometre long circular walk around the reservoir, taking in the aforementioned plateau and castles.

The Königsburg is a ruined medieval castle southeast of Königshütte, a village in the borough of Oberharz am Brocken, in Harz district in the German state of Saxony-Anhalt.

The Wurmberg Gondola Lift is a monocable gondola lift with a length of 1.7 miles (2.7 km), built in 1963, leading from the Braunlage tourist resort within the Harz mountain range on the top of the 3,185 feet (971 m) high Wurmberg mountain.

The Rappbode Dam is the largest dam in the Harz region as well as the highest dam in Germany. Together with several other dams and retention basins, it forms the flood protection system for the eastern Harz.

Altenbrak is a village and a former municipality in the district of Harz, in Saxony-Anhalt, Germany.

The Harzer Wandernadel is a system of hiking awards in the Harz mountains in central Germany. The hiker can earn awards at different levels of challenge by walking to the various checkpoints in the network and stamping his or her passbook to record the visit. With 222 checkpoints in three federal states and across five districts in the Harz and with membership in five figures, the system has gained a following Germany-wide.

Söse is a river of Lower Saxony, Germany. It is a right tributary of the river Rhume and 38 kilometres (24 mi) long.

Romkerhall is a popular tourist destination on the River Oker in the Harz Mountains of Germany. There is a public car park here as well as a hotel and restaurant opposite the Romkerhall Waterfall. Romkerhall lies within the unincorporated area of Harz in the Lower Saxon county of Goslar in the Harz Mountains. The hotel and waterfall form a small tourist attraction which is marketed as the "Kingdom of Romkerhall - the smallest kingdom in the world!" 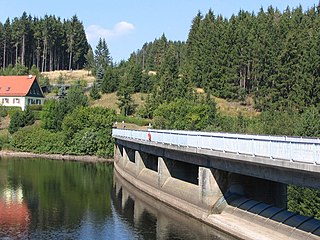 The Königshütte Dam is a dam in the German state of Saxony-Anhalt in the Harz mountains. It impounds the River Bode and lies between Königshütte and Susenburg. It is a so-called storage reservoir (Überleitungssperre) forming part of the Rappbode Dam system.

The Bode Gorge is a 10 kilometres (6.2 mi) long ravine that forms part of the Bode valley between Treseburg and Thale in the Harz Mountains of central Germany. The German term, Bodetal, is also used in a wider sense to refer to the valleys of the Warme and Kalte Bode rivers that feed the River Bode.

The Hexentanzplatz in the Harz mountains is a plateau that lies high above the Bode Gorge, opposite the Rosstrappe in Saxony-Anhalt, Germany.

The Bielstein Tunnel is a disused railway tunnel in Saxony-Anhalt in the Harz Mountains of Central Germany. The tunnel is 465.7 metres long and lies between the zig zag of Michaelstein and Braunesumpf. It belonged to the Erzstufen Railway and, from 1885, to the Harz Railway . During the construction of the Harz Railway the tunnel profile was widened and Braunesumpf station laid out. When the Rübeland Railway was electrified from 1960 to 1965 the tunnel profile had to be widened again. In addition the tunnel was found to be in poor condition so that it was abandoned and the line was relaid further east through a cutting. The tunnel is no longer accessible today. 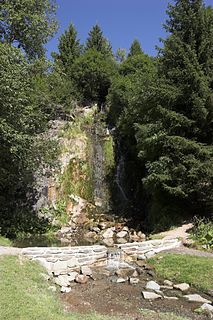 Königshütte Waterfall is a waterfall in the village of Königshütte in the borough of Oberharz am Brocken in the Harz Mountains of Central Germany.

The Trageburg is a ruined castle immediately next to the Rappbode Pre-Dam in the Harz Mountains of Germany. It is located near Trautenstein in the district of Harz in Saxony-Anhalt.

The Ilse valley is the ravine of the Ilse stream in the northern boundary of the Harz mountain range in Germany. Part of the Harz National Park, it runs from the town of Ilsenburg at the foot of the mountain range up to the source region near the summit of the Brocken massif, the highest mountain of the range. The scenic valley is a popular hiking area.

The Eckerloch is a forested mountain valley, 845 metres above sea level near the village of Schierke in the Harz Mountains of central Germany. 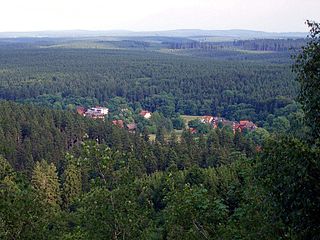 The Barenberg, also called the Bärenberg or Bärenkopf, is a mountain, 695.5 m above sea level (NN), in the Harz Mountains of Germany near the village of Schierke, Harz county, in the state of Saxony-Anhalt.

The Wilhelmsblick in the Harz Mountains of central Germany is a viewing point near the village of Treseburg in the Bode Gorge in the county of Harz, Saxony-Anhalt. From this single point, four different stretches of the River Bode may be seen as it swings in great loops around the spur on which the viewing point is located.

The Steina Dam in the Harz Mountains of central Germany is a dam system comprising a dam, reservoir and waterworks near the village of Steina and belongs to the unincorporated area of Harz in the district of Göttingen in Lower Saxony.