Troglav (Serbian Cyrillic : Троглав) is the highest peak of the Dinara Mountain Range in the Dinaric Alps (also known as Dinarides). Dinara is the longest massif within karstic mountain chain of the western Balkan peninsula. Troglav is located in the territory of Bosnia and Herzegovina. It is named after Triglav, Slavic god. The name literally means "three headed".

The Troglav group is around 30 km long and around 15 km wide, making it the largest in the range. On the northwestern side, it is separated from the Dinara group by the Privija pass (1230 m) and on the southeast from the Kamešnica group by Vaganj (1173 m) road pass, which connects Sinj in Croatia with Livno in Bosnia. On the northeastern, Bosnian side, lies the huge karstic field of Livanjsko Polje (700 m), which is 65 km long. On the southwestern, Croatian side, there is the Cetina river valley with 15 km long Peruća Lake (Perućko jezero), continuing on to the Sinjsko Polje.

The south-western slopes (Croatian side) ascend in a few steps. The first step rises up to around 1500–1600 m: up to 1100–1200 m slope is forested, mostly with oak and hornbeam, while the area above is grassy. Behind is a large depression, which is a labyrinth of peaks up to 1700 m, ridges and plateaux, which are strewn with funnel-shaped basins. On the part of the plateau called Vještičja Gora (around 1400 m), south of Troglav, there is a large complex of beech forest, which stands out against the background of grass and stone. Behind this area, the main ridge rises. From the border with the Dinara group, the main ridge gradually rises up to the summit of Troglav. Thereafter, the slopes gradually descend towards Vaganj pass, while the pasture area between them widens.

The north-eastern slopes (Bosnian side) are much steeper and mostly forested with beech and spruce. They mostly descend steeply, without steps, towards Livanjsko Polje field and end abruptly. A few kilometres north of Troglav, the only level ground appears and it contains the Velike Poljanice complex of meadows.

On the northeastern part of the group, between Bat (1851 m) and Bunjevačko Brdo (1849 m) groups of peaks, there is huge undulating grassy plateau, a few kilometres long and wide. The average altitude of the area is over 1600 m, and the region was glaciated during the ice ages.

Bjelašnica is a mountain in central Bosnia and Herzegovina. It is to the southwest of Sarajevo, bordering Mount Igman. Bjelašnica's tallest peak, by which the mountain group got its name, rises to an elevation of 2,067 metres (6782 feet). Other notable peaks are Krvavac, Mali Vlahinja, and Hranisava. The Bjelašnica range is bordered by the Rakitnica in the south, the Neretva in the west, Mount Igman in the north-east and Mount Ivan in the north-west. Only at 20 minutes distance of Sarajevo, it is a tourist attraction for hiking and skiing.

Igman is a mountain plateau in central Bosnia and Herzegovina. Geologically, Igman is part of the Dinaric Alps and formed largely of secondary and tertiary sedimentary rock, mostly Limestone. It is located southwest of Sarajevo, bordering the Bjelašnica range in the south and west, Hadžići and Ilidža in the north, and the river Željeznica in the east. Igman's highest point, Crni vrh, west of the Malo Polje road, at an altitude of 1,510 metres, the homonym highest elevation on the east side of this road reaches an elevation of 1,502 metres. Most of Igman is covered with mixed forest with local pastures. Igman was the location of the lowest recorded temperature in the region, −43 °C (−45 °F). Igman has been the site of extensive combat during the 1992-95 Siege of Sarajevo and certain areas, in particular the surroundings of former front lines, feature a high mine risk.

Dinara is a 100 kilometres (62 mi) long mountain range in the Dinaric Alps, located on the border of Bosnia and Herzegovina and Croatia. It has four major mountains or peaks, from north-west to south-east:

Livno is a city and the administrative center of Canton 10 of the Federation of Bosnia and Herzegovina, an entity of Bosnia and Herzegovina. It is situated on the river Bistrica in the southeastern edge of the Livno Field at the foot of Kruzi plateau which are located beneath the Cincar mountain and rocky hill Crvenice. Livno is the centre of the Canton 10 which mainly covers an area of the historical and geographical region of Tropolje. As of 2013, it has a population of 37,487 inhabitants. 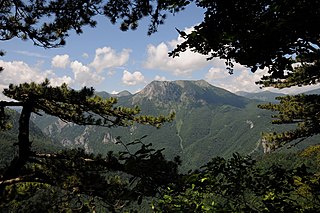 The Sutjeska National Park is a national park located in Bosnia and Herzegovina. Established in 1962, it is Bosnia and Herzegovina's oldest national park. It includes the highest peak of Maglić at over 2,386 metres (7,828 ft), on the border with Montenegro. The Montenegrin part of Maglić massif in the park has also formed the Trnovačko Jezero. The Strict Nature Reserve "Perućica", one of the last two remaining primeval forests in Europe, is part of the park. The park is also famous as being the location of the Battle of the Sutjeska in 1943 during World War II. It is an affiliated member of EUROPARC Federation. 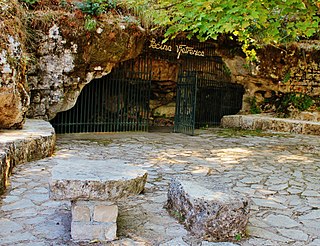 Buško Blato or Buško Jezero is an accumulation lake located on the south side of Livanjsko Polje and northwest of Duvanjsko Polje in Bosnia and Herzegovina. The name is also a reference to the area surrounding the lake which includes a number of villages, of which Prisoje is the largest.

Livanjsko polje, located in Bosnia and Herzegovina, is the largest polje in the world. A typical example of karst polje encircled by tall peaks and mountain ranges, the field is characterized by many unique natural phenomenons and karstic features. 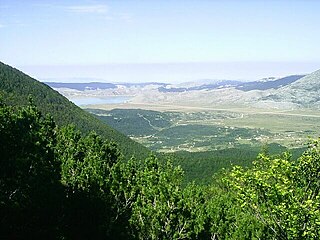 Blidinje Nature Park is a nature park in Bosnia and Herzegovina, established on 30 April 1995. It is situated at the Blidinje plateau, in the heart of Dinaric Alps, between major mountains of the range, Čvrsnica, Čabulja and Vran, with characteristic karstic features such as Dugopolje field, Blidinje Lake, Grabovica and Drežanka valleys, and others. It represents important natural, hydrogeological reserves in Dinaric karst of Bosnia and Herzegovina, with significant cultural and historical heritage.

Šator is a mountain in the Dinaric Alps, in the western regions of Bosnia and Herzegovina. The name šator means "tent". The highest peak Veliki Šator is 1,872 m (6,142 ft) above sea level. Dimensions of the mountain are some 15 km in the west–east and 10 km in the north–south direction.

Vrbica is a village in the municipality of Livno, Bosnia and Herzegovina. 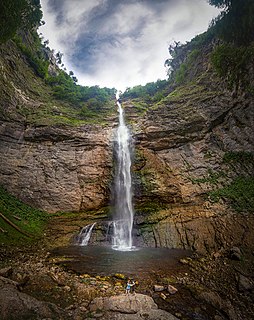 Skakavac is a waterfall formed on the Perućica, a mountain creek, in the Perućica, which is regulated as a Strict Nature Reserve as part of Sutjeska National Park in Republika Srpska, Bosnia and Herzegovina. It is one of the highest waterfalls in the country, at about 75 metres (246 ft) in height.

Tropolje or Završje or Western Regions is a historical region in Bosnia and Herzegovina covering a part of the Dinaric Alps. It encompasses territory around karst fields of Livno, Duvno and Glamoč. The wider zone of this region also comprises the fields of Kupres and Bosansko Grahovo. Historically, the region is located on the border of Bosnia, Dalmatia and Herzegovina. The region covers 5 out of 6 municipalities of Canton 10.

Bistrica is sinking river near Livno in Western Bosnia, Bosnia and Herzegovina, though highly regulated for hydropower and irrigation since mid-20th century.

Žabljak is a river near Livno in Western Bosnia, Bosnia and Herzegovina. It flows for roughly 6.6 kilometers westward through Livanjsko Polje before its confluence with the Bistrica, just upstream from beginning of its section with artificially created riverbed, from where river begins to turn southward toward Buško Blato.

The fish fauna of the Neretva river basin in the western Balkans is representative of the Dinaric karst region and characterized by several endemic and endangered species.