Trogloneta is a genus of spiders in the Mysmenidae family. It was first described in 1922 by Simon. As of 2017 [update] , it contains 11 widely distributed species. [1] 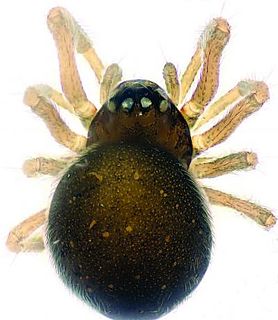 Mysmenidae is a spider family with about 135 described species in around 13 genera. The family is one of the least well known of the orb-weaving spiders because of their small size and cryptic behaviour. These spiders are found in humid habitats such as among leaf litter and in caves. 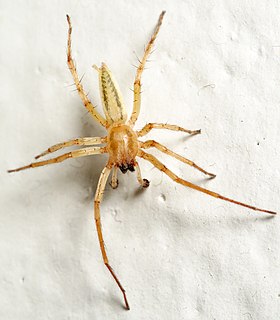 Anyphaenidae is a family of araneomorph spiders, sometimes called anyphaenid sac spiders. They are distinguished from the sac spiders of the family Clubionidae and other spiders by having the abdominal spiracle placed one third to one half of the way anterior to the spinnerets toward the epigastric furrow on the underside of the abdomen. In most spiders the spiracle is just anterior to the spinnerets. Like clubionids, anyphaenids have eight eyes arranged in two rows, conical anterior spinnerets and are wandering predators that build silken retreats, or sacs, usually on plant terminals, between leaves, under bark or under rocks. There are more than 500 species in over 50 genera worldwide.

Oonopidae is a family of spiders commonly known as goblin spiders, consisting of over 1,600 described species in about 113 genera worldwide, with total species diversity estimated at 2000 to 2500 species. The type genus of the family is OonopsKeyserling, 1835. 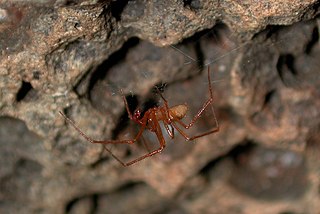 The scaffold web spiders of the family Nesticidae, are closely allied with the Theridiidae, or tangle web spiders. Like the Theridiidae, these spiders have a comb of serrated bristles on the hind tarsi that are used to pull silk bands from the spinnerets. It contains 15 genera and about 280 species, many of which are associated with caves or overhangs. The genus Nesticus is the type for the family and is found throughout the world. The related Eidmannella has speciated considerably in Texas caves and includes some extremely localized species that are considered threatened. One species, Eidmannella pallida, is found in caves and under overhangs, but also in agricultural fields and other habitats away from such restricted areas. The genus Carpathonesticus is found in central Eurasia.

Nesticella is a genus of spiders of the family Nesticidae. Most of its species are found in Asia—from Russia to Japan, down to Indonesia and several other islands, including New Guinea—though some species from Africa and South-America are also known. It includes a blind spider, Nesticella marapu.

Anapistula is a genus of araneomorph spider. It contains the following species:

Mysmena is a genus of spiders in the family Mysmenidae, found in many parts of the world.

Brasilionata is a genus of Brazilian spiders first described by Wunderlich in 1995. It is represented by a single species, B. arborense. The defining characteristics of this genus include a homogeneous color pattern on the back of the abdomen, setae on the cymbial fold the same size as other setae, a space between the anterior median eyes, and a pointed switch on the end of the palpal bulb similar to that of Microdipoena. Only two specimens have been identified, one in 1995 and another in 2015.

Microdipoena is a cosmopolitan genus of dwarf cobweb weaver spiders in the family Mysmenidae, containing sixteen species. Four new species were discovered from 2003 and 2013.

Synaphris is a genus of spiders in the Synaphridae family. It was first described in 1894 by Simon. As of 2017, it contains 11 species.

Otiothops is a genus of spiders in the Palpimanidae family. It was first described in 1839 by MacLeay. As of 2017, it contains 44 species.