Bogorodica Trojeručica (Serbian Cyrillic: Богородица Тројеручица, Greek: Παναγία Τριχερούσα, Panagia Tricherousa, meaning "Three-handed Theotokos") or simply Trojeručica (Тројеручица, Three-handed) is a famous wonderworking icon in the Serbian Orthodox monastery of Hilandar on Mount Athos, Greece. It depicts Theotokos (Virgin Mary) with young Jesus in the hodegetria position, and is covered with a riza. It is the most important icon of the Serbian Orthodox Church. [1] On the back of the icon is the painting of St Nicholas. [1]

According to tradition, the icon was in the possession of John of Damascus in the early 8th century [2] and it is associated with his miraculous healing around the year 717. According to tradition, while he was serving as Vizier to caliph Al-Walid I, he was falsely accused of treachery and his hand was cut off. [2] [3] The accusation was, allegedly, made by Byzantine Iconoclast emperor Leo the Isaurian, who was indeed a great opponent of St John, and friend of Al-Walid I. [2] Upon praying in front of an icon of the Theotokos, allegedly, his hand was miraculously restored. In thanksgiving, he had a silver replica of his hand fashioned and attached it to the icon. [2] After this, the icon became known as "three-handed" (Tricherousa), because it had three hands (two of Theotokos plus one more). [2]

John Damascene became a monk at Mar Sabbas monastery outside of Jerusalem and gave the icon to the monastic community there. Later the icon was given as a present to St. Sava when he visited the monastery, together with another icon of Theothokos in the style of Nursing Madonna, and with the crosier of Sabbas the Sanctified, the founder of the monastery. [2] Sava brought the icon to Hilandar monastery where he lived. [2] It remained there until 1347 when it was taken by Dušan of Serbia during his visit to Hilandar and brought with him to Serbia. At the end of the 14th century, the icon was in the possession of the Studenica monastery. [2] In the early 15th century, Trojeručica was back in Hilandar.

Art historians think the style of the icon is more likely from the 14th century, and that it may be a copy or re-painting of an earlier prototype. [5] Another version brought to Moscow in 1661 became famous, and resulted in many Russian copies. [6] [7] 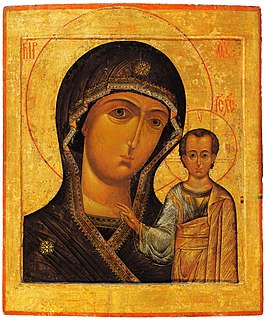 Theotokos is a title of Mary, mother of Jesus, used especially in Eastern Christianity. The usual Latin translations are Dei Genitrix or Deipara. Familiar English translations are "Mother of God" or "God-bearer" – but these both have different literal equivalents in Greek, Μήτηρ Θεοῦ and Θεοφόρος. 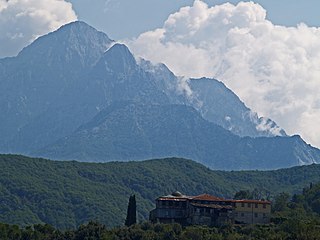 Mount Athos is a mountain and peninsula in northeastern Greece and an important centre of Eastern Orthodox monasticism. It is governed as an autonomous polity within the Hellenic Republic, namely the monastic community of Mount Athos under the direct jurisdiction of the Ecumenical Patriarch of Constantinople.

The Hilandar Monastery is one of the twenty Eastern Orthodox monasteries in Mount Athos in Greece and the only Serbian monastery there. It was founded in 1198 by Stefan Nemanja and his son Saint Sava. St. Symeon was the former Grand Prince of Serbia (1166-1196) who upon relinquishing his throne took monastic vows and became an ordinary monk. He joined his son Saint Sava who was already in Mount Athos and who later became the first Archbishop of Serbia. Upon its foundation, the monastery became a focal point of the Serbian religious and cultural life, as well as "the first Serbian university". It is ranked fourth in the Athonite hierarchy of 20 sovereign monasteries. The Mother of God through her Icon of the Three Hands (Trojeručica), is considered the monastery's abbess.

The Dormition of the Mother of God is a Great Feast of the Eastern Orthodox, Oriental Orthodox, and Eastern Catholic Churches. It celebrates the "falling asleep" (death) of Mary the Theotokos, and her being taken up into heaven. It is celebrated on 15 August as the Feast of the Dormition of the Mother of God. The Armenian Apostolic Church celebrates the Dormition not on a fixed date, but on the Sunday nearest 15 August. In Western Churches the corresponding feast is known as the Assumption of Mary.

The Serbian Orthodox Church is one of the autocephalous Eastern Orthodox Christian churches.

The Holy Lavra of Saint Sabbas, known in Arabic and Syriac as Mar Saba and historically as the Great Laura of Saint Sabas, is a Greek Orthodox monastery overlooking the Kidron Valley in the Bethlehem Governorate of Palestine, in the West Bank, at a point halfway between Bethlehem and the Dead Sea. The monks of Mar Saba and those of subsidiary houses are known as Sabaites. 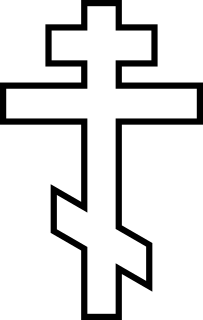 The Monastery of St. Bogorodica Prečista is a Macedonian Orthodox monastery situated near the city of Kicevo, North Macedonia. It is dedicated to the Virgin Mary, Mother of God. 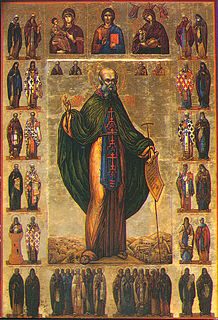 Sabas (439–532), in Church parlance Saint Sabas or Sabbas the Sanctified, was a Cappadocian Greek monk, priest and saint, who lived mainly in Palaestina Prima. He was the founder of several convents, most notably the one known as Mar Saba. The saint's name is derived from Aramaic: סַבָּא Sabbāʾ "old man".

The Lepavina Monastery is a Serbian Orthodox monastery dedicated to the Presentation of Mary and located at the village of Sokolovac, near the town of Koprivnica in Croatia.

Inexhaustible Chalice is a wonderworking icon of the Mother of God which revealed itself in Serpukhov, Russia in 1878. The icon is venerated in the Russian Orthodox Church and has become known for healing those who suffer from alcoholism, drug abuse and other forms of addiction.

Tama are a form of votive offering or ex-voto used in the Eastern Orthodox Churches, particularly the Greek Orthodox Church. Tamata are usually small metal plaques, which may be of base or precious metal, usually with an embossed image symbolizing the subject of prayer for which the plaque is offered.

Saint Sava, known as the Enlightener, was a Serbian prince and Orthodox monk, the first Archbishop of the autocephalous Serbian Church, the founder of Serbian law, and a diplomat. Sava, born as Rastko Nemanjić, was the youngest son of Serbian Grand Prince Stefan Nemanja, and ruled the appanage of Zachlumia briefly in 1190–92. He then left for Mount Athos, where he became a monk with the name Sava (Sabbas). At Athos he established the monastery of Hilandar, which became one of the most important cultural and religious centres of the Serbian people. In 1219 the Patriarchate exiled in Nicea recognized him as the first Serbian Archbishop, and in the same year he authored the oldest known constitution of Serbia, the Zakonopravilo nomocanon, thus securing full independence; both religious and political. Sava is regarded as the founder of Serbian medieval literature.