Trojica u mraku is the fifth album of the Croatian rock band Aerodrom, released through Jugoton in 1986. The album was named after the comic book drawn by Andrija Maurović and introduced band's frontman Jurica Pađen as a producer, with an intent to bring Aerodrom's sound back to rock. [1] The band recorded as a trio, with Zlatan Živković returning, this time on drums. Trojica u mraku did not produce any successful singles and the band broke up several months after the album was released. It was their last album until the reunion in 2000.

All music and lyrics written by Jurica Pađen, all arrangements by Aerodrom. 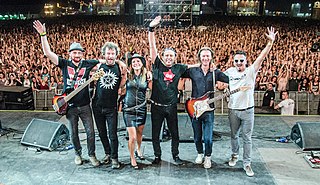 Azra was a Croatian and Yugoslav rock band that was one of the most popular acts of the Yugoslav new wave music of the 1980s. Azra was formed in 1977 by its frontman Branimir "Johnny" Štulić. The other two members of the original line-up were Mišo Hrnjak (bass) and Boris Leiner (drums). The band is named after a verse from "Der Asra" by Heinrich Heine. They are considered to be one of the most influential bands from the Yugoslav new wave rock era and the Yugoslav rock scene in general. 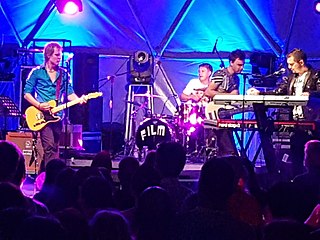 Film was a Yugoslav rock group founded in 1978 in Zagreb. Film was one of the most popular rock groups of the former Yugoslav new wave in the late 1970s to early 1980s.

Idoli were a Serbian new wave band from Belgrade. They are considered to be one of the most notable acts of the Yugoslav rock scene, and their 1982 album Odbrana i poslednji dani was on several occasions voted by the music critics as the greatest Yugoslav rock album.

Divlje Jagode is a Bosnian and former Yugoslavian hard rock / heavy metal band, formed in 1977. The band is widely considered to be regional pioneers of the heavy metal genre and one of the most popular and enduring icons of rock music in Bosnia and Herzegovina and former Yugoslavia. They have endured many lineup changes over the years, remained active in the music industry and retained their popularity throughout the years. In 40 years since its founding, the band have released 13 studio albums, many singles, compilation albums, and sold around 4 million records.

Aerodrom is a Croatian rock band from Zagreb.

D' Boys was a Yugoslav synthpop/pop rock band from Belgrade.

Jurica Pađen is a Croatian singer and guitarist. He was a founding member of the bands Parni valjak and Aerodrom and member of Azra and Grupa 220. During the 1990s he started his own group Pađen Band. In the 2000s he was also a part of the 4 asa supergroup along with Rajko Dujmić, Vlado Kalember and Alen Islamović.

Overdrive is a Serbian hardcore punk/metalcore band from Zrenjanin.

Obične ljubavne pjesme is the third album of the Croatian rock band Aerodrom, released through Jugoton in 1982. This is the first album that introduces Jurica Pađen as a lead vocal, what he will remain until today. The album contains their greatest single until then, "Obična ljubavna pjesma", which brings the band national success.

Dukat i pribadače is the fourth album of the Croatian rock band Aerodrom, released through Jugoton in 1984. The album is recorded as a trio with the new drummer Nenad Smoljanović. The keyboards were played by Rajko Dujmić of Novi Fosili, who is also the producer of the album. Dukat i pribadače turns the band's sound on a pop rock path and carries three successful singles, "Fratello", "24 sata dnevno", which were released on a 7" record, and "Digni me visoko".

Na travi is the sixth album of the Croatian rock band Aerodrom, released through Croatia Records in 2001, 15 years after their last album Trojica u mraku and the breakup. Three original members of the band, frontman jurica Pađen, Mladen Krajnik and Zlatan Živković appeared on the album, which also introduced new bass player, Tomislav Šojat, who played with Pađen in Pađen Band during the 1990s. Remo Cartagine and Paolo Sfeci, two original members, also appeared on the record as guest musicians to celebrate the band's reunion. Three singles were released from this record, "A do Splita pet", "Bistra voda" and "Badnja noć".

Rock @ Roll is the seventh album by the Croatian rock band Aerodrom, released through Croatia Records in 2007. The album marked the band's 30th anniversary, which they celebrated at a New Year's Eve concert in Ban Jelačić Square in Zagreb. Jurica Pađen wrote all of the music and lyrics, except for "Fait Accompli", a song co-written with Branimir Štulić and dedicated to John Lennon. Rock @ Roll was recorded as a trio with new drummer Slavko Pintarić 'Pišta'. The album included four new singles, "Mili moj anđele", "Tvoj pas me čudno gleda", "Kći starog vodeničara" and "Odma mi je zapela za oko".

Taktika noja is the eighth album of the Croatian rock band Aerodrom, released through Menart Records on 3 December 2012. The album debuted at #23 on the official Croatian Top 40 chart and peaked at #13 in the next week. Two new members performed on the record, guitarist Ivan Havidić and drummer Damir Medić. Seven singles were released from this album, "Loše volje", "Ostani", "Duh je nestao", which peaked at #8 on the national Top 20 singles chart, "Dovela si me u red", "Široko ti bilo polje", which debuted at #5 of the newly established national HR Top 40 singles chart, "Teška vibra", which debuted at #38 and peaked at #9 and "Mila Moja", which was released in May 2014 and peaked on Top 40 list at #14.

Hitovi i legende is the first live album of the Croatian rock band Aerodrom, released through Croatia Records in November 2009. The album was recorded in "Tvornica Kulture" club in Zagreb on 13 December 2008. The band consisted of Jurica Pađen, Tomislav Šojat, Ivan Havidić and Boris Leiner. Track listing included biggest hits of Pađen's career and bands he was a member of or worked with, like Aerodrom, Pađen Band, Azra, Parni Valjak, Film and Haustor.

Žicanje is the first solo album by the Croatian guitarist Jurica Pađen, released through Croatia Records in September 2005. The album was recorded in early 2005 in SYAM Studio in Zagreb and contains 15 instrumental tracks featuring Remo Cartagine, Tomislav Šojat, Ana Šuto and Nikša Bratoš. The album release was followed by video for "Google Boogie", which was the only single from the album.

All Stars is the second solo album by the Croatian guitarist Jurica Pađen, released through Croatia Records in December 2014. The album was recorded from July to October 2014 in ZG Zvuk Studio in Zagreb and contains 12 instrumental tracks featuring some of the most famous guitar players from the Croatian rock scene like Massimo Savić, Branimir Štulić, Husein Hasanefendić, Zele Lipovača, Neno Belan, Vedran Božić and Nikša Bratoš. The album release was followed by video for "Love Is Blue / Al Dente", featuring Drugi Način guitarist Mario Domazet. The second single released was "Prijateljska vatra" in June 2015, featuring Branimir Štulić. The album debuted at #30 and topped at #10 on the official Croatian Top 40 domestic albums selling chart and at #11 on the combined domestic/foreign chart. The album was nominated in two categories on 22nd Porin Music Award in 2015 and was awarded for "Instrumental Album of the Year ".

The Ultimate Collection is the compilation album of the Croatian rock band Aerodrom and its frontman Jurica Pađen, released through Croatia Records in April 2008. It is a double CD compilation of the greatest hits of two Pađen's bands from the eighties and nineties, Aerodrom and Pađen Band, as well as two songs from his first solo instrumental album. Pađen was the editor of the release and picked the songs for the album himself.

Dnevni rituali is the ninth studio album of the Croatian rock band Aerodrom, released through Croatia Records on 22 November 2019. The album is recorded by the same band members like their previous studio release Taktika noja. The album debuted at #21 on the official Croatian Top 40 chart and peaked at #8. Six singles were released from this album, "Od sutra ne pušim", "Ispod tuša", "Ja te jednostavno volim", which peaked at #13 and spent 12 weeks on the national Top 40 singles chart, "Titanik", "Neka bude", which debuted and peaked at #22 and "Sunce mi se smije", which debuted and peaked at #27.