The Tron were a noble family of Venice whose most prominent member, Nicolò Tron, served as the Doge of Venice from 1471 to 1473. Other members of the family served as procurators, senators, generals and ambassadors of the Venetian Republic. The family rose to particular prominence in the 15th century as maritime traders and local rulers in Corfu and Crete. The line had allegedly become extinct by the 19th century. [1] [2]

The Tron family moved to France, where it thrived and grew in Buchony. At some point, the family divided and a part relocated to the valley of Ubaye and the city of Barcelonnette.

By the early 20th century, parts of both branches of the family moved to México, where it remains and grows to this day, mainly in México City and Morelia, Michoacán.

The family's origins are unclear, although 18th-century genealogists, including Marco Barbaro in his Albori de' patritii veneti have proposed that they originally came from Ancona. They are thought to have built the now demolished Chiesa di San Boldo in Venice in the 11th century, and there are records in Venice of a Marco "Truno" dating from 1159. The family had three branches: San Stae (from the Venetian parish of San Stae), San Beneto (from the Venetian parish of San Beneto), and Candia (from the Kingdom of Candia, the name of Crete when it was a colony of the Venetian Republic). [3]

The Republic of Venice or Venetian Republic, traditionally known as La Serenissima, was a sovereign state and maritime republic in what is now northeastern Italy. It lasted from 697 AD until 1797 AD. Centered on the lagoon communities of the prosperous city of Venice, the republic grew into a trading power during the Middle Ages and strengthened this position in the Renaissance. Citizens spoke the still-surviving Venetian language, although publishing in (Florentine) Italian became the norm during the Renaissance.

Contarini is one of the founding families of Venice and one of the oldest families of the Italian Nobility. In total eight Doges to the Republic of Venice emerged from this family, as well as 44 Procurators of San Marco, numerous ambassadors, diplomats and other notables. Among the ruling families of the republic, they held the most seats in the Great Council of Venice from the period before the Serrata del Maggior Consiglio when Councillors were elected annually to the end of the republic in 1797. The Contarini claimed to be of Roman origin through their patrilineal descendance of the Aurelii Cottae, a branch of the Roman family Aurelia, and traditionally trace their lineage back to Gaius Aurelius Cotta, consul of the Roman Republic in 252 BC and 248 BC.

The Barbaro family was a patrician family of Venice. They were wealthy and influential and owned large estates in the Veneto above Treviso. Various members were noted as church leaders, diplomats, patrons of the arts, military commanders, philosophers, scholars, and scientists.

San Nicolò al Lido refers to both the San Nicolò Church and most importantly to its annexed Monastery of San Nicolò located in Venice, northern Italy. It is located in the northern part of the Lido di Venezia and houses the relics of Saint Nicholas, patron of sailors. From this church, the traditional thanksgiving mass of the Sposalizio del Mare is celebrated. The complex houses monks of the Franciscan order.

Jacopo Tiepolo, also known as Giacomo Tiepolo, was Doge of Venice from 1229 to 1249. He had previously served as the first Venetian Duke of Crete, and two terms as Podestà of Constantinople. During his first term, following the capture and mysterious end of Peter of Courtenay, Tiepolo acted as de facto ruler of the Latin Empire, negotiating treaties on behalf of the Empire with Egypt and the Seljuk Turks. 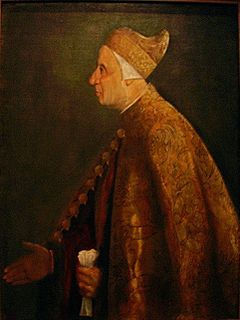 Nicolò Marcello was the 69th Doge of Venice, elected in 1473. He held office for a short period, from 13 August 1473 to 1 December 1474. Said to have been inspired by a previous painting dating from the 15th century, Titian painted Nicolo Marcello's portrait long after his death.

Francesco Erizzo was the 98th Doge of Venice, reigning from his election on April 10, 1631 until his death fifteen years later. His reign is particularly notable because the last year of his reign saw the beginning of a war with the Ottoman Empire for control of Crete that would last for 24 years and dominate the geopolitics of the Mediterranean.

Domenico II Contarini was the 104th Doge of Venice, reigning from his election on October 16, 1659 until his death.

The Venier were a prominent family in the Republic of Venice who entered the Venetian nobility in the 14th century. Their members include:

Ca' Tron is a palace in Venice, northern Italy, facing the Canal Grande. Part of the sestiere (quarter) of Santa Croce, it is situated between the Palazzo Belloni Battagia and Palazzo Duodo, near the church of San Stae. It is owned by the Università Iuav di Venezia and houses the Department of Design and Planning in Complex Environments.

The Museo di Palazzo Mocenigo is a palazzo near the Church of San Stae, south of the Grand Canal in the sestiere of Santa Croce in Venice, Italy. It is now a museum of fabrics and costumes, run by the Fondazione Musei Civici di Venezia.

Ca Bembo is a grade-listed sixteenth-century palazzo in the parish of San Trovaso in the sestiere of Dorsoduro in Venice, Italy, noteworthy for a particularly large garden. It has, despite its name, no clear connection with the Bembo family, but a particularly strong association with one of the most prominent branches of the aristocratic Venetian family of the Barbarigo. 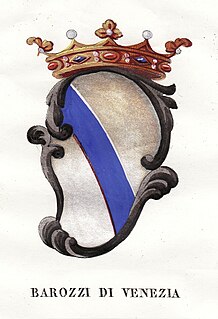 The Barozzi were an aristocratic Venetian family. Members of the family became sailors, clerics and men of learning. They were lords of Santorini and Thirassia, and held military fiefs on the island of Crete. Members of the family were involved in the conspiracy of Bajamonte Tiepolo against the Doge of Venice in 1310.

Nicolò Tron was an Italian politician, businessman and agronomist, citizen of the Republic of Venice.