Trondra (Scots : Trondra) is one of the Scalloway Islands, a subgroup of the Shetland Islands in Scotland. It shelters the harbour of Scalloway and has an area of 275 hectares (1.06 sq mi).

Trondra was becoming rapidly depopulated until 1970, when road bridges were built to neighbouring Burra (West and East) and to the southern peninsula of the Shetland Mainland. [5] Since then the population has recovered from a low of 20 in 1961. [3]

A local community hall was opened in 1986.

Settlements on the island include:

Trondra is made up of steeply inclined dalradian rocks; mainly quartz and mica rich schists but with some crystalline limestone in the north which provide fertile soils around Cauldhame and Cutts. The hills are covered in grass and heather, with trees being few and far between, much like the rest of the Shetland Islands.

Trondra supports a number of seabirds including many gulls and black guillemots. [3]

There are many fields of sheep and a few of Shetland ponies throughout the island. There is a variety of other wildlife present on and around the isle, such as hedgehogs, sparrows, starlings, seals and porpoises.

Trondra has 2 rowing teams, male and female, which compete in the summertime rowing regattas around Shetland and the annual 'Round Trondra Race'.

"Da Peerie Neep" ("The Wee Turnip") is a recently founded annual event which takes place in the Trondra hall and involves various neep related events such as "Toss the Neep".

Trondra usually enters a male and female squad in the Scalloway Fire Festival, which takes place in early January each year. 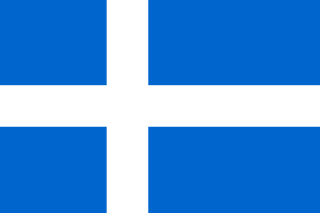 Shetland, also called the Shetland Islands and formerly Zetland, is a subarctic archipelago in the Northern Atlantic, between Great Britain, the Faroe Islands and Norway. It is the northernmost part of the United Kingdom.

Foula, located in the Shetland archipelago of Scotland, is one of the United Kingdom’s most remote permanently inhabited islands. Owned since the turn of the 20th century by the Holbourn family, the island was the location for the film The Edge of the World (1937). The liner RMS Oceanic was wrecked on the nearby Shaalds of Foula in 1914. 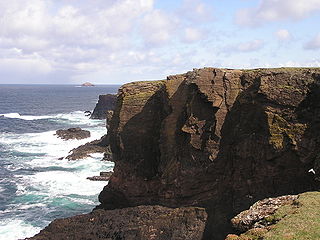 Papa Stour is one of the Shetland Islands in Scotland, with a population of under fifteen people, some of whom immigrated after an appeal for residents in the 1970s. Located to the west of mainland Shetland and with an area of 828 hectares, Papa Stour is the eighth largest island in Shetland. Erosion of the soft volcanic rocks by the sea has created an extraordinary variety of caves, stacks, arches, blowholes, and cliffs. The island and its surrounding seas harbour diverse populations of wildlife. The west side of the island is a Site of Special Scientific Interest and the seas around the island are a Special Area of Conservation. 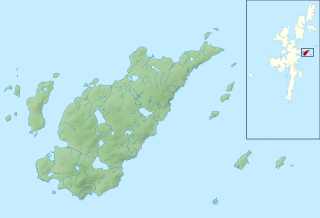 Whalsay is the sixth largest of the Shetland Islands in the north of Scotland. 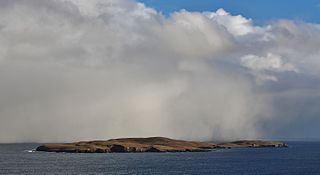 Mousa is a small island in Shetland, Scotland, uninhabited since the nineteenth century. The island is known for the Broch of Mousa, an Iron Age round tower, and is designated as a Special Protection Area for storm-petrel breeding colonies. 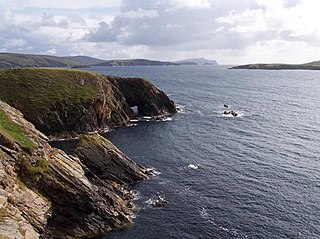 East Burra is one of the Scalloway Islands, a subgroup of the Shetland Islands in Scotland. It is connected by a bridge to West Burra.

Wyre is one of the Orkney Islands, lying south-east of Rousay. It is 311 hectares (1.20 sq mi) and 32 metres (105 ft) at its highest point. It is one of the smallest inhabited islands in the archipelago.

Papa Westray, also known as Papay, is one of the Orkney Islands in Scotland, United Kingdom. The fertile soil has long been a draw to the island.

Muckle Roe is an island in Shetland, Scotland, in St. Magnus Bay, to the west of Mainland. It has a population of around 130 people, who mainly croft and live in the south east of the island.

Vaila is an island in Shetland, Scotland, lying south of the Westland peninsula of the Shetland Mainland. It has an area of 327 hectares, and is 95 metres (312 ft) at its highest point.

Oxna is one of the Scalloway Islands, lying north west of Burra in Shetland, Scotland. Oxna has an area of 68 hectares.

Brother Isle is a small, uninhabited island in Shetland, Scotland. It lies between the islands of Yell and Shetland Mainland. It is 40 hectares in size. 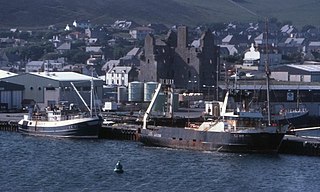 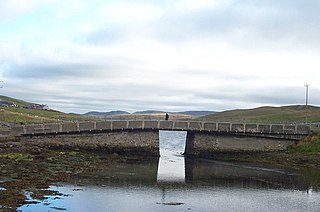 Burra is the collective name for two of the Shetland Islands, West and East Burra, which are connected by bridge to one another, and to the Shetland Mainland via Trondra.

The Scalloway Islands are in Shetland opposite Scalloway on south west of the Mainland. They form a mini-archipelago and include:

Papa is an uninhabited island in the Scalloway Islands, Shetland, Scotland.