The Tronoša Monastery (Serbian : Манастир Троноша / Manastir Tronoša) is a Serbian Orthodox monastery between the villages of Tršić and Korenita, in the administrative town of Loznica, in western Serbia. It is ecclesiastically part of the Eparchy of Šabac. According to tradition, the monastery was built by King Stefan Dragutin.

The monastery is located 17 km (11 mi) southeast of Loznica. It is situated in the forested area of the Korenita village. However, being also close to the village of Tršić and as the first school of a linguist and language reformer Vuk Stefanović Karadžić who was also from Tršić, the monastery is popularly connected to this village. [1]

There are no proper historical records which confirm the origin of the monastery and everything known about it is according to the various traditional writings. The monastery was an endowment of King Stefan Dragutin. However, he died in 1316 and the construction was finished by his widow, Queen Catherine in 1317. It was named after three rivers which confluence into one at the monastery (tri reke koje vodu nose, "three water bearing rivers"). The original edifice was looted and razed by the Ottoman Empire several times in the 14th and 15th centuries. It ended up being completely demolished and it is not known what the original monastery looked like. [1]

It was rebuilt on the foundations of the old monastery in 1559. The enterprise was headed by the hegumen Pajsije and monks Arsenije and Genadije. That same year, the Church of the Presentation of Mary was built. Just few years later, a school which transcribed and rewrote the old manuscripts was operational. As an act of retaliation for the attacks of the hajduks in the region, the Ottomans burned it in the early 1800s. It was renovated in 1834 and was painted by Mihailo Konstantinović from Bitola and Nikola Janković from Ohrid. [1]

In 1791, a hieromonk Josif Tronošac transcribed the 1526 Tronoša Chronicle, the most important Serbian literary memorial in the first half of the 18th century. The copy of the chronicle is kept in the monastery, while the original is in Vienna. [1] [2] [3] [4]

Tronoša was badly damaged during the World War I. During the Battle of Cer in 1914, Serbian wounded soldiers were transported to the monastery for medical treatments. After Austria-Hungary occupied Serbia, their army burned the church books. The also destroyed or removed all doors in the complex, which were repaired only in 1923. In August 1941, a local Chetnik rebellion liberated Loznica ("the first town liberated from Germans in the occupied Europe") in the Battle of Loznica, and Tronoša's hegumen Georgije Bojić was active in the planning and conducting of the operation. as an aide to Veselin Misita, in charge of the attack. When German reoccupied the area in October 1941 they burned the monastery books and punched through one of the walls with the cannonball. [1]

One of the best known traditions in the monastery is the making of large "plowmen candles". Two are cast each year out of 50 kg (110 lb) of wax and are 1.5 m (4 ft 11 in) tall. On the Maundy Thursday people gather in front of the monastery, bring the candles inside the church and light them in front of the icons of Jesus Christ and the Holy Mother of God. They are thought to help to preserve and enhance the harvest, hence the name. The custom of casting the candles and the ceremony of bringing them into the church and lighting them has been placed on the Serbian list of the intangible cultural heritage. [1]

As Vuk Stefanović Karadžić learned to write in the monastery, "coming to school from the nearby Tršić through the forest", a section of the monastery is adapted into the "Museum of the Vuk's early schooling". Today, Tronoša is a female monastery. In 2017 it officially celebrated 700th anniversary. [1]

The monastery has been protected since 22 December 1948 and was declared a cultural monument of great importance in 1979. [1] [5]

Archimandrite Stefan Jovanović was born in the nearby village of Tekeriš, on the Cer. He was a noted spiritual leader, patriot, rebel and the first teacher of Vuk Stefanović Karadžić. He was especially active against the Turkification ("thanks to him, none of the Serbs east of the Drina river were Turkified"). When the famine struck the regions of Jadar and Rađevina, he came to the local Turks to ask for the help for the hungry people, but the Turks poisoned him. In 2017 Serbian Orthodox Church canonized him as the Venerable Stefan of Tronoša. Its day is 17 September and it is the official slava of the Eparchy of Šabac. [1]

Vuk Stefanović Karadžić was a Serbian philologist, anthropologist and linguist. He was one of the most important reformers of the modern Serbian language. For his collection and preservation of Serbian folktales, Encyclopædia Britannica labelled him "the father of Serbian folk-literature scholarship." He was also the author of the first Serbian dictionary in the new reformed language. In addition, he translated the New Testament into the reformed form of the Serbian spelling and language.

The Mačva District is one of eight administrative districts of Šumadija and Western Serbia. It expands in the western parts of Serbia, in the geographical regions of Mačva, Podrinje, Posavina, and Pocerina. According to the 2011 census results, it has a population of 298,931 inhabitants. The administrative center of the Mačva district is the city of Šabac.

The Morača Monastery is a Serbian Orthodox monastery located in the valley of the Morača River in Kolašin, central Montenegro. It was founded in 1252 by Stefan Vukanović, of the Serbian Nemanjić dynasty. It is one of the best known medieval monuments of Montenegro. 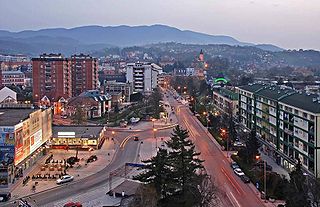 Tršić is a village in the municipality of Loznica, located in the Mačva region of Serbia. It is the birthplace of Serbian linguist and language reformer, Vuk Stefanović Karadžić. Most houses in the area are built out of wood.

The Tavna Monastery is a Serbian Orthodox monastery located south of the city of Bijeljina in north-eastern Republika Srpska, Bosnia and Herzegovina. The date of its foundation is unknown.

The Battle of Loznica involved an attack on the German garrison of that town by the Jadar Chetnik Detachment on 31 August 1941. Following the World War II German-led Axis invasion of Yugoslavia in April 1941, the Kingdom of Yugoslavia was partitioned. At the time, Loznica was part of the German-occupied territory of Serbia, which included Serbia proper, with the addition of the northern part of Kosovo, and the Banat.

Stefan Stanković ( was a Serbian Orthodox bishop from the Eparchy of Budaand Metropolitan of Karlovci from 1836 to 1841, succeeding Stefan Stratimirović. He was succeeded by Metropolitan Josif Rajačić.

Raška architectural school, also known as the Raška style, or simply as the Raška school, is an ecclesiastical architectural style that flourished in the Serbian High Middle Ages, during the reign of the Nemanjić dynasty. The style is present in the notable Morača Monastery, Uvac monastery and Dobrilovina monastery, among many others. This style combines traditional Slavic architecture with early Christian church-design, and often utilizes a combination of stone and wood material. 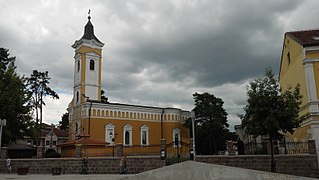 Eparchy of Žiča is one of the eparchies of the Serbian Orthodox Church in the Republic of Serbia. It is seated in Kraljevo, in the Monastery of Žiča. Since 2014, diocesan bishop is Justin Stefanović.

The Pustinja Monastery is a Serbian Orthodox monastery in village Poćuta near Valjevo in Central Serbia.

The Dobrilovina Monastery is a Serbian Orthodox monastery in Donja Dobrilovina, Mojkovac, northern Montenegro. It is located on the left Tara river banks, in a region known as Potarje, at the beginning of the Tara River Canyon, the deepest river canyon in Europe. The village of Dobrihnina was mentioned in a Nemanjić charter in 1253, though the oldest preserved mention of the monastery dates back to 1592, when the Ottoman authorities allowed the locals to rebuild their monastery in Dobrilovina. In 1609, the current standing church dedicated to St. George was finished; the frescoes were finished by 1613. This church has been pillaged, abandoned, destroyed and renovated several times since its founding.

The Uvac Monastery is a Serbian Orthodox monastery in western Serbia.

The Majstorovina Monastery is a Serbian Orthodox monastery located in the village of Majstorovina in Bijelo Polje, Montenegro. It includes the Church of the Holy Trinity, dating back to the reign of Vukan Nemanjić. It was abandoned in the 17th century, its documents having been relocated to the Dobrilovina Monastery and the Nikoljac Monastery.

The Dovolja Monastery is a Serbian Orthodox monastery located on the right river banks of the Tara, near Pljevlja, in the village of Premćani within the hamlet of Dovolja. It is dedicated to the Assumption of the Holy Mother of God. It is believed to have been founded by King Stefan Milutin at the end of the 13th century. It was first mentioned in 1513. It is ecclesiastically administrated by the Eparchy of Mileševa. Some time after 1699, the relics of Archbishop Arsenije I were moved from Dovolja to the Dobrilovina Monastery.

Vukov sabor, also known as Vuk's Convocation or Vuk's Fair, is the oldest and most massive cultural event in Serbia. It was named after the reformer of the Serbian language Vuk Karadžić. The central program is traditionally held in September in Vuk's birthplace Tršić, near Loznica. Part of the program is realized in Loznica, Belgrade and the nearby Tronoša Monastery.

Hadži Melentije Stevanović was a restorer and archimandrite of the Rača monastery, one of the leaders of the First Serbian Uprising, Vojvode of Sokolski nahija, bishop-elected of the Eparchy of Šabac-Užice, and Metropolitan of Belgrade from 1810 to 1813.

Radovašnica Monastery is a Serbian Orthodox monastery in the Diocese of Šabac in Radovašnica. It is considered an immovable cultural property and a cultural monument. Its founder was the nun Evgenija Abt.