Trooper is a Romanian heavy metal music band. It was formed on 25 October 1995, by brothers Alin and Aurelian Dincă and Ionuţ Rădulescu being influenced by bands like Iron Maiden or Judas Priest. The band used to be called Megarock, then White Wolf. Once with the arrival of Ionuţ "Negative" Fleancu the band was renamed to Trooper. Poll conducted by the specialized Heavy Metal Magazine in 2001 placed Trooper first in the category Best young band. [1] The group appeared on MTV, MCM, Atomic, TVR1, TVR2, B1 TV, Antena 1, Romania International, Prima TV, Pro TV. [1] Throughout their career, Trooper have shared their stage with bands such as Iron Maiden, Manowar, Sepultura, Kreator and Evergrey.

Romania is a European country with a multicultural music environment which includes active ethnic music scenes. Romania also has thriving scenes in the fields of pop music, hip hop, heavy metal and rock and roll. During the first decade of the 21st century some Europop groups/artists, such as Tom Boxer, Morandi, Akcent, Edward Maya, Alexandra Stan, and Inna, achieved success abroad. Traditional Romanian folk music remains popular, and some folk musicians have come to national fame.

Blaze Bayley is an English singer. He was the lead singer of Wolfsbane from 1984 to 1994. He was also the lead singer of Iron Maiden during Bruce Dickinson's absence from 1994 to 1999. Since then, he has pursued a solo career and has released ten studio albums. 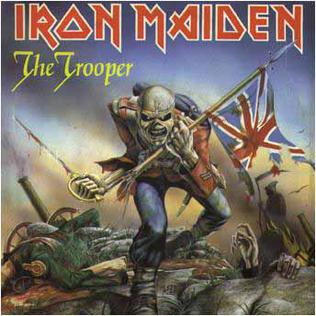 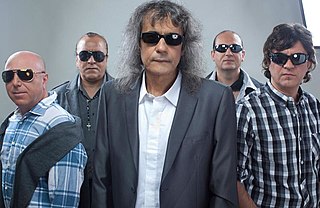 Iris is a Romanian rock band established in February 1977 by Ioan 'Nelu' Dumitrescu (drums), Ion 'Nuțu' Olteanu and Emil Lechințeanu. They achieved success, followed by tours throughout Romania and recordings for radio broadcast. At the 2006 MTV Romania Music Awards, Iris won the Best Rock Award and were nominated for Best Band and Best Live Act. 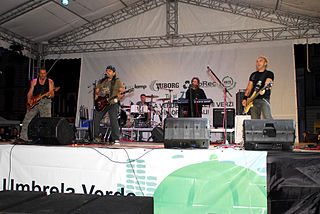 Cargo is a Romanian heavy metal band from Timișoara.

Dan Andrei Aldea was a Romanian multi-instrumentalist and vocalist, best known for his work with the band Sfinx, but also for his solo career.

Krypton is a Romanian rock band formed in 1982 by Eugen Mihăescu.

Hi-Q was a Romanian pop group, founded in 1996 in Braşov. The original group consisted of Mihai Sturzu, Florin Grozea, and Dana Nălbaru. Described by Libertatea as one of the best-known musical groups in Romania, Hi-Q also hosts its own TV show on national television. Dana Nălbaru left the group in 2003 to pursue a solo career and returned in October 2010. On 31 July 2014, on a news magazine show presented by Teo Trandafir, the band split. 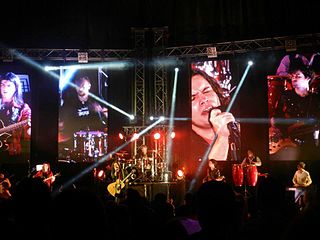 Bosquito is a Romanian rock band formed in Brașov in the year 1999. The group's current line-up consists of vocalist/guitarist Radu Almășan, drummer Dorin Țapu, guitarist Ciprian Pascal, bassist Mircea “Burete” Preda. The band is well known for infusing their songs with diverse influences, including Gypsy music, Latin, balkan, punk, and elements of symphonic music. The group has released 5 albums to date with several top-charting singles including "Pepita", "Marcela", "Bosquito", "Hopa Hopa", and the ballad "Două Mâini", which reached #1 in the Romanian Top 100 and remains one of the most celebrated love songs in Romanian music. In 2005, the band entered a hiatus on the Romanian market while relocating to the United States; the original line-up disbanded shortly thereafter. In 2011 Radu Almășan made a comeback as Bosquito with a brand-new lineup launching their first single in 6 years: "Când Îngerii Pleacă", and releasing a new album, Babylon in 2014.

Cuibul are an acoustic funk band from Chisinau, Moldova. Igor Dinga, founder and initial vocalist of the band formed the band in 1991 as a rock'n'roll funk fusion band. The band released 6 albums from 1991-2001, and their musical style changed from rock'n'roll to acoustic mellow funk with chillout and Latino influences.

Goodbye to Gravity was a Romanian metalcore band from Bucharest, active from 2011 until 2015, when four of the band's five members died during their concert at a night club in Bucharest, due to a burning firework that started a large fire. 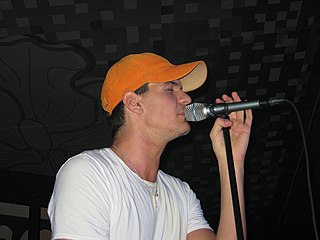 Tudor Chirilă is a Romanian actor, musician, composer, and producer. He was the lead singer of the band Vama Veche, after which he founded the band Vama. As an actor, he featured in both short and long movies and has played reference roles in plays of some of the most important Romanian directors.

Romania participated in the Eurovision Song Contest 2018 with the song "Goodbye" written by Alexandru Matei, Alin Neagoe and Cristina Caramarcu. The song was performed by the band The Humans. The Romanian broadcaster Televiziunea Română (TVR) organised the national final Selecția Națională 2018 in order to select the Romanian entry for the 2018 contest in Lisbon, Portugal. The national final consisted of six shows: five semi-finals and a final. A total of sixty entries were selected and twelve competed in each semi-final where a five-member jury panel selected three entries to advance to the final. The fifteen qualifiers competed in the final on 25 February 2018 where "Goodbye" performed by The Humans was selected as the winner entirely by a public vote.

Infected Rain is a Moldovan heavy metal band, formed in 2008 in Chișinău. They are signed to Napalm Records. 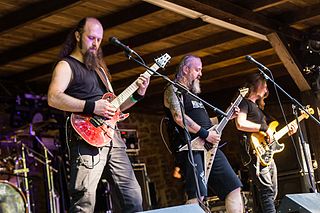 Bucovina is a Romanian folk metal band formed in Iași in 2000. Since its inception, Bucovina has released four full-length studio albums and one extended play, all of them featuring constant members Florin "Crivăț" Țibu, Bogdan Luparu and Bogdan "Vifor" Mihu. Named after the historical region situated in Northern Romania, Bucovina is known for incorporating folkloric elements both in their music and lyrics. 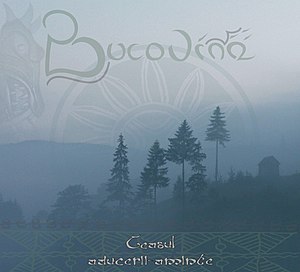 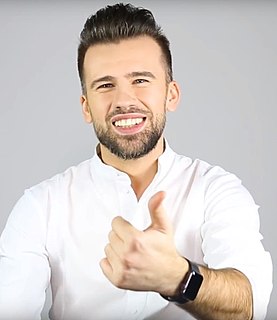 Florin Ristei is a Romanian singer and television presenter. He was born in the city of Galați, Romania, but he currently lives in Bucharest. He is best known for his debut single, "Dana" and for winning the third season of the X Factor Romania in 2013. 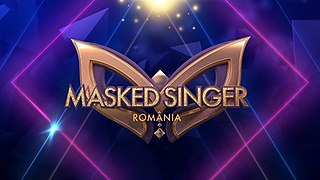 Masked Singer România is a Romanian reality singing competition television series that premiered on 11 September 2020 on Pro TV. It is the Romanian adaptation of King of Mask Singer and shows celebrities singing covers of famous songs while wearing head-to-toe costumes and face masks that hide their identities. The show was presented by Jorge in the first season and the judging panel consisted of singer-entertainer Horia Brenciu, top-charting singer-songwriter INNA, film producer and writer Codin Maticiuc and online celebrity Ana Morodan.