Tropea is a seaside resort with sandy beaches, located on the Gulf of Saint Euphemia, part of the Tyrrhenian Sea, on Italy's west coast and was named “Most beautiful village in Italy” for 2021. [3]

A legend suggests that the town was founded by Hercules when returning from his labours at the Pillars of Hercules (the modern-day Strait of Gibraltar). Graves of Magna Graecian origin have been found near Tropea.

The Virgin Mary of Romania

A painting of the Virgin Mary from around 1330 hangs in the Cattedrale di Maria Santissima di Romania, a church constructed in Tropea in the 12th Century. The painting is known as the Virgin Mary of Romania and is of Byzantine origin.

An unconfirmed story asserts that it was carried aboard a ship sailing from the Eastern Roman Empire, when the boat was driven into the port of Tropea by a storm. After repairing the damage, the captain tried to depart, but the ship could not leave the harbour. The bishop of the city, Ambrogio Cordova, dreamed repeatedly that the Virgin Mary was asking him to keep her in Tropea and to protect her. The bishop gathered officials and citizens and went to the ship, where they took the picture. As soon as the painting was brought to shore the ship allegedly left the town.

The Virgin Mary is said to have appeared to the bishop several times in his dreams, warning him of an earthquake that would devastate Calabria. On 27 March 1638 a bishop organised a penitential procession for the people from Tropea, which meant they were out of harm's way when the earthquake struck.

Other events have been attributed to the Virgin Mary's protection, including Tropea being spared from the worst of the 1783 Calabrian earthquakes and when six bombs fell on the town in Tropea in the Second World War, but failed to explode.

Villages around Tropea produce red onions that are well-known in Italy. Cipolle di Tropea ("Tropea onions") have become a synonym in Italy for all red onions.

Tropea is twinned with:

Panorama of Tropea from the Tyrrhenian Sea 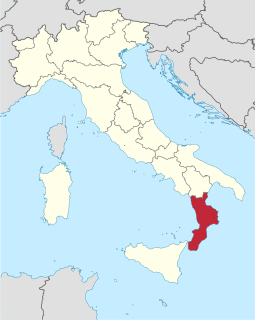 Calabria, is a region in Southern Italy. It is bordered by Basilicata to the north, the Gulf of Taranto to the east, the Ionian Sea to the south, the Strait of Messina to the southwest, which separates it from Sicily, and the Tyrrhenian Sea to the west. With almost 2 million residents across a total area of approximately 15,222 square kilometres (5,877 sq mi), it is the tenth populous and the tenth-largest Italian region by area. Catanzaro is the region's capital, while Reggio Calabria is the most populous city in the region. Calabria is the 14th most productive region in the country. The Pollino National Park with 192,565 ha is the largest national park in the country and ranks among the 50 largest in the world.

Reggio di Calabria, usually referred to as Reggio Calabria, or simply Reggio by its inhabitants, is the largest city in Calabria. It has an estimated population of nearly 200,000 and is the twenty-first most populous city in Italy, after Modena, and the 100th most populated city in Europe. Reggio Calabria is located in the exact center of the Mediterranean and is known for its climate, ethnic and cultural diversity. It is the third economic centre of mainland Southern Italy. About 560,000 people live in the metropolitan area, recognised in 2015 by Italian Republic as a metropolitan city.

Martone is a town and comune in the province of Reggio Calabria, Calabria, in southern Italy. 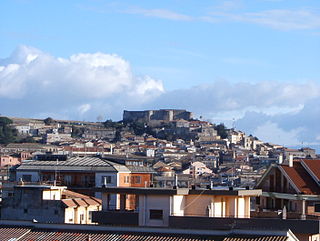 Vibo Valentia is a city and comune (municipality) in the Calabria region of southern Italy, near the Tyrrhenian Sea. It is the capital of the province of Vibo Valentia, and is an agricultural, commercial and tourist center. There are also several large manufacturing industries, including the tuna district of Maierato. Very important for the local economy is Vibo Marina's harbour.

Ricadi is a small rural town, as well as a municipality, located along the Tyrrhenian coast, in the province of Vibo Valentia, in the Italian region of Calabria. 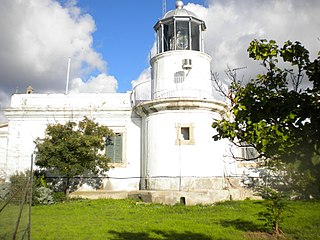 Capo Vaticano is a wide bathing place in the Municipality of Ricadi in Calabria, Italy. The 'Cape' is formed by a particular white-gray granite, which is examined worldwide for its geologic characteristics.

Africo is a comune in the province of Reggio Calabria, in the Southern Italian region of Calabria located 74 kilometres (46 mi) from Reggio Calabria. 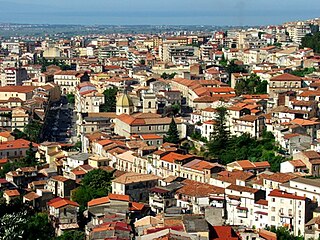 Lamezia Terme, commonly called Lamezia, is an Italian city and comune of 70,452 inhabitants (2013), in the province of Catanzaro in the Calabria region.

Red onions are cultivars of the onion, and have purplish-red skin and white flesh tinged with red. They are most commonly used in the culinary arts, but the skin of the red onion has also been used as a dye.

Scilla is a town and comune in Calabria, Italy, administratively part of the Metropolitan City of Reggio Calabria. It is the traditional site of the sea monster Scylla of Greek mythology. 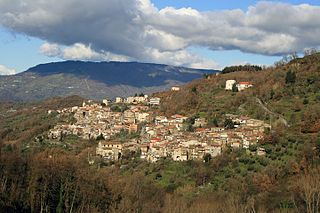 Conflenti is a comune and town in the province of Catanzaro in the Calabria region of southern Italy.

Montauro is a comune and town in the province of Catanzaro in the Calabria region of Italy. The municipalities of Gasperina, Montepaone, Palermiti, Squillace, Stalettì are nearby. Agricultural center of the Ionian coast of the greenhouses, in foothills sloping towards the Gulf of Squillace, North of the mouth of the river Soverato. Built before the year 1000, the village had name from the mountain on which it stands, felt with gold. In 1101 by Count Roger was given in fief to the carthusians of Serra San Bruno. Severely damaged by the earthquake of 1783, in 1846 he suffered other damage due to an exceptional flood. The parish church incorporates remains of medieval fortifications with its external structures; in the Interior, which currently occurs in the appearance given to him in the 17th century, wooden ceiling and choir ' 600, sumptuous altar in polychrome marble and bronze sculptures and marble of 600-700 's. Near the village there are the ruins of the monastery of San Domenico now call "La Grangia di Sant' Anna", of Norman Foundation and destroyed by an earthquake in 1783. Montauro has amazing Portals from many years of age. A Medieval town that looks over the Ionian Sea. In Montauro there are many different association registered like:

Acri is a town of 19.949 inhabitants in the northern part of Calabria region in southern Italy. Since 17 September 2001 Acri has had the "status" of city.

Bisignano is a town and comune in the province of Cosenza, part of the Calabria region of southern Italy. It is situated on hills in the Crati valley, between the Pollino and Sila National Parks.

Diamante is a coastal town and comune in the province of Cosenza, part of the Calabria region of southern Italy.

Laino Borgo is a town and comune of 1,879 inhabitants in the province of Cosenza in the Calabria region of southern Italy. It is located on the border between two regions, and lies at the entrance to the Pollino National Park, Italy's largest national park and an area of importance for its geology and biodiversity, recognized as a UNESCO Geopark since 2015.

Paola is an Italian comune of 15,408 inhabitants in the province of Cosenza in Calabria.

Nicotera is a comune (municipality) in the province of Vibo Valentia, Calabria, southern Italy.

Monterchi is a Comune (Municipality) in the Province of Arezzo in the Italian region of Tuscany, located about 80 kilometres (50 mi) southeast of Florence and about 20 kilometres (12 mi) east of Arezzo. It sits in the northern part of Valtiberina, the valley where the Tiber river runs going from Emilia-Romagna towards Rome. The valley runs through Romagna, Tuscany and Umbria, parallel to the Casentino Valley.

The 1908 Messina earthquake occurred on 28 December in Sicily and Calabria, southern Italy with a moment magnitude of 7.1 and a maximum Mercalli intensity of XI (Extreme). The epicentre was in the Strait of Messina which separates Sicily from the Italian mainland. The cities of Messina and Reggio Calabria were almost completely destroyed and between 75,000 and 82,000 lives were lost. It was the most destructive earthquake ever to strike Europe.