Trophobiosis is a symbiotic association between organisms where food is obtained or provided. The provider of food in the association is referred to as a trophobiont. The name is derived from the Ancient Greek τροφή (trophē), meaning "nourishment", and -βίωσις (-biosis), which is short for the English word symbiosis . [1]

Among the more noted trophobiotic groups are ants and members of a number of hemipteran families. A number of ant genera are recorded as tending groups of hemipterans to varying degrees. In most cases the ants collect and transport the honeydew secretions from the hemipterans back to the nest for consumption. Not all examples of ant trophobiotic interactions are mutualistic, with instances such as ants attracted to Cacopsylla pyricola feeding on both the honeydew and the C. pyricola individuals. This interaction has been recorded in Ancient Chinese writings and is noted as one of the oldest instances of biological pest control. [1]

In mutualistic relationships, the production of honeydew by trophobionts is rewarded by removal of dead hemipterans and protection from a variety of predators by the attendant ants. In some relationships the ants will build shelters for the farmed trophobionts, either to protect them or keep them from leaving the area. Some species of ants construct underground rooms to house the trophobionts and carry them between the host plant and housing area daily. In more complex obligate relationships (where both symbionts entirely depend on each other for survival) the ants will nest with the partner trophobionts in silk constructed leaf shelters or in underground colonies. Several species of migratory ants are noted to bring the trophobiont species with them when they move, transporting the trophobionts to new feeding areas and acting as a quick escape method if danger arises. While aphids, mealybugs and other more sedentary hemipterans are most often used as trophobionts, occasional instances of more active hemipterans such as leafhoppers have been recorded. [1] [2] In such instances in southern Africa, larger ant genera such as Camponotus are more successful at herding and containment of the leafhoppers. Smaller ant genera have been observed to tend younger or smaller leafhoppers for short periods, and in some cases, small ant genera were observed visiting herds tended by large ant genera. In these cases it is suggested the small ant genera may have been stealing honeydew droplets from the herd. [2]

Ants of the entirely subterranean genus Acropyga have a noted trophobiotic relationship with mealybugs, being considered obligate coccidophiles and living in the same nests with their trophobionts. Queens of at least eleven living Acropyga species have been observed carrying a "seed" trophobiont in their mandibles during the mating flight, and it is suggested the seed is then used to start the mealybug colony in the queen's new nest. [3] The level of dependency between Acrophyga and their trophobiont is suggested to be such that neither can survive without the other. An experiment using a captive colony of A. epedana showed that even when the colony was starved the ant refused offered food alternatives.

This specific behavior has also been documented in Dominican amber fossils dating back 15  million years ago, with queens of the fossil species Acropyga glaesaria being found preserved with species of the extinct mealybug genus Electromyrmococcus . [4] [5] Older trophobiotic associations have been suggested for the Eocene fossil ant species Ctenobethylus goepperti [6] based on a Baltic amber fossil entombing thirteen C. goepperti workers intermingled with a number of aphids. [7] Convergent behavior to that of Acropyga is displayed by the arboreal ant Tetraponera binghami . This species lives in hollow internodes of giant bamboos and new queens will also carry a seed mealybug during the mating flight. [1] 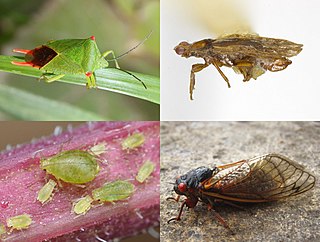 Hemiptera is an order of insects, commonly called true bugs, comprising over 80,000 species within groups such as the cicadas, aphids, planthoppers, leafhoppers, bed bugs, and shield bugs. They range in size from 1 mm (0.04 in) to around 15 cm (6 in), and share a common arrangement of sucking mouthparts. The name "true bugs" is often limited to the suborder Heteroptera. Many insects commonly known as "bugs", especially in American English, belong to other orders; for example, the lovebug is a fly and the May bug and ladybug are beetles. Mealybugs are insects in the family Pseudococcidae, unarmored scale insects found in moist, warm habitats. Many species are considered pests as they feed on plant juices of greenhouse plants, house plants and subtropical trees and also act as a vector for several plant diseases. Some ants live in symbiotic relationships with them, protecting them from predators and feeding off the honeydew which they excrete. 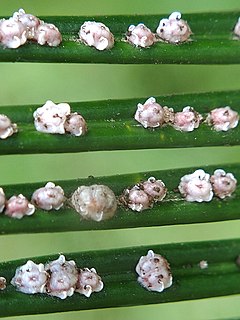 Scale insects are small insects of the order Hemiptera, suborder Sternorrhyncha. Of dramatically variable appearance and extreme sexual dimorphism, they comprise the infraorder Coccomorpha which is considered a more convenient grouping than the superfamily Coccoidea due to taxonomic uncertainties. Adult females typically have soft bodies and no limbs, and are concealed underneath domed scales, extruding quantities of wax for protection. Some species are hermaphroditic, with a combined ovotestis instead of separate ovaries and testes. Males, in the species where they occur, have legs and sometimes wings, and resemble small flies. Scale insects are herbivores, piercing plant tissues with their mouthparts and remaining in one place, feeding on sap. The excess fluid they imbibe is secreted as honeydew on which sooty mold tends to grow. The insects often have a mutualistic relationship with ants, which feed on the honeydew and protect them from predators. There are about 8,000 described species. 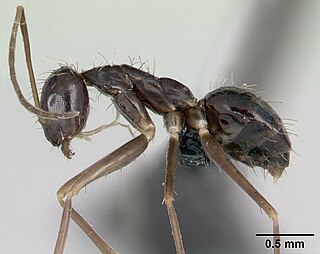 Paratrechina is one of seven ant genera in the Prenolepis genus-group from the subfamily Formicinae. Six species are included in Paratrechina; one of which, the longhorn crazy ant, is a widespread, pantropical pest. 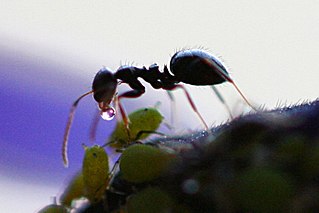 Honeydew is a sugar-rich sticky liquid, secreted by aphids and some scale insects as they feed on plant sap. When their mouthpart penetrates the phloem, the sugary, high-pressure liquid is forced out of the anus of the aphid. Honeydew is particularly common as a secretion in hemipteran insects and is often the basis for trophobiosis. Some caterpillars of Lycaenidae butterflies and some moths also produce honeydew.

Myrmecophily is the term applied to positive interspecies associations between ants and a variety of other organisms, such as plants, other arthropods, and fungi. Myrmecophily refers to mutualistic associations with ants, though in its more general use, the term may also refer to commensal or even parasitic interactions. 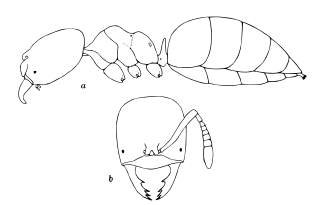 Acropyga is a genus of small formicine ants. Some species can be indirect pests. A. acutiventris, which is found from India to Australia, tends subterranean, root-feeding mealybugs of the species Xenococcus annandalei. Living, gravid females are carried in the jaws of A. acutiventris queens during their nuptial flight, to establish the symbiotic association in founding colonies. Other Acropyga species have relationships with different species of mealybugs, and it could be a trait common to the whole genus. 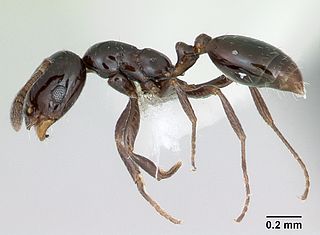 The little black ant is a species of ant native to North America. It is a shiny black color, the workers about 1 to 2 mm long and the queens 4 to 5 mm long. It is a monomorphic species, with only one caste of worker, and polygyne, meaning a nest may have more than one queen. A colony is usually moderately sized with only a few thousand workers.

Electromyrmococcus is an extinct genus of mealybug in the Pseudococcidae subfamily Rhizoecinae. The genus currently contains three species, all from the early Miocene, Burdigalian stage, Dominican amber deposits on the island of Hispaniola.

Xenococcus annandalei is a species of mealybug in the family Pseudococcidae that infests the roots of certain species of trees. 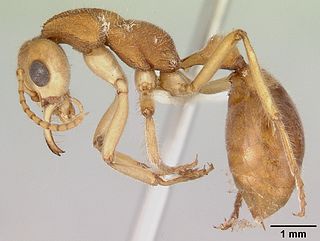 Prionomyrmecini is an ant tribe belonging to the subfamily Myrmeciinae established by William Morton Wheeler in 1915. Two members are a part of this tribe, the extant Nothomyrmecia and the extinct Prionomyrmex. The tribe was once considered a subfamily due to the similarities between Nothomyrmecia and Prionomyrmex, but such reclassification was not widely accepted by the scientific community. These ants can be identified by their long slender bodies, powerful stingers and elongated mandibles. Fossil Prionomyrmecini ants were once found throughout Europe, possibly nesting in trees and preferring jungle habitats. Today, Prionomyrmecini is only found in Australia, preferring old-growth mallee woodland surrounded by Eucalyptus trees. Nothomyrmecia workers feed on nectar and arthropods, using their compound eyes for prey and navigational purposes. Owing to their primitive nature, they do not recruit others to food sources or create pheromone trails. Nothomyrmecia colonies are small, consisting of 50 to 100 individuals. 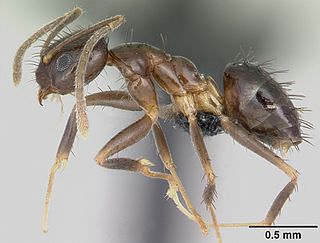 Nylanderia is a large genus of ants in the subfamily Formicinae. The genus has a nearly cosmopolitan distribution with species inhabiting a wide array of habitats in almost all geographic regions. Nylanderia, currently containing over 110 species, is an ecologically important genus, with some species reported as being invasive. The ants are small to medium in size and range in color from pale yellow to black.

Melissotarsus is a rare African genus of ants in the subfamily Myrmicinae. They are known from the Afrotropics and Malagasy regions, where their nests are located in living wood, built by tunneling through the wood under the bark. They are rarely seen outside of their nests, which may contribute to their perceived rarity. However, they are considered pest insects because of damage they can cause to trees, including economically important ones such as mangos and trees in the family Burseraceae, including Aucoumea klaineana, Dacryodes buettneri, and Dacryodes edulis.

Acropyga epedana is an ant in the subfamily Formicinae. It lives permanently underground in the Chiricahua Mountains in Arizona and forms a mutualistic association with the mealybug Rhizoecus colombiensis.

Armaniidae was a name formerly given to a group of extinct ant-like hymenopterans known from a series of Cretaceous fossils found in Asia and Africa. Armaniidae has been suggested by several authors to belong to the family Formicidae as one of the stem-group subfamilies, Armaniinae; however, this position has was not taken up by myrmecologists. The family contained seven described genera and thirteen described species. An analysis of fossil ants based on antenna structure in 2017 resulted in three of the family being broken up with some genera being moved to Sphecomyrminae and other genera being relegated to incertae sedis in Formicidae or Aculeata. 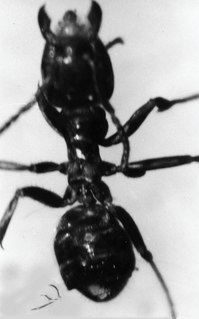 Azteca alpha is an extinct species of ant in the subfamily Dolichoderinae known from possibly Miocene fossils found on Hispaniola. A. alpha is one of only two species in the genus Azteca to have been described from fossils, both found in Dominican amber. It is the host for a fossil nematode, and has been preserved with scale insects.

Nylanderia pygmaea is an extinct species of formicid in the ant subfamily Formicinae known from fossils found in the Baltic region.

Acropyga exsanguis is a species of ant in the subfamily Formicinae. It lives in underground nests in Mexico, Central and South America.