Tropic or Trópico is a 1945 painting by Spanish artist Josep Renau. Renau executed the painting during his exile in México, while he collaborated with Mexican muralist painters such as David Alfaro Siqueiros. [1] The painting represents a landscape, probably a Mexican natural space. Three vultures surround a fish skeleton on the lower right side of an uninhabited landscape. The scene evokes the desolation and destruction of humankind provoked by the wars of the 20th century, in the precise year of the end of World War II, which left a death toll of 60 million people.

Tropic is Renau's personal response to the grief and mourning provoked by the Spanish Civil War and World War II. The painting is one of the most important and influential works by the artist. Renau depicts a landscape with the plastic means of the Escuela de Vallecas, a group of modern Spanish painters pursuing the representation of the Castilian topography as a ruthless land. Both this reference to the Spanish art of the 1930s and the vultures eating carrion as an allegory of modern wars give this painting a deep sense of melancholy and tragedy. In this work, Renau advances the presence of skulls that Picasso used recurrently after 1945 to express the trauma of World War II and his experience in the Paris of the German Occupation.

Renau reacts to the trauma of war with angular shapes and expressionistic brushstrokes that remain close to the language of Picasso's Guernica and Joan Miró's The Reaper, two large-format paintings conceived for the Spanish Pavilion in the Exposition Internationale des Arts et Techniques dans la Vie Moderne (Paris International Exposition) in the 1937 World's Fair in Paris. Renau played a crucial role in the gestation of the Spanish Pavilion; he was responsible for Picasso's participation [2] and executed a series of photomurals that covered the exterior of the building designed by Josep Lluis Sert and Luis Lacasa. [3]

Renau considered this work one of the most important pieces in his personal collection and took the painting with him when he left México for East Berlin in 1958. Since 1976, the painting was in the collection of Manfred Schmidt, Germany. As for 2016, it is owned by a private collector in the United States, and is on long-term loan to the Museo Reina Sofía in Madrid, [4] where it can be seen together with Picasso's Guernica in gallery 206. [5] 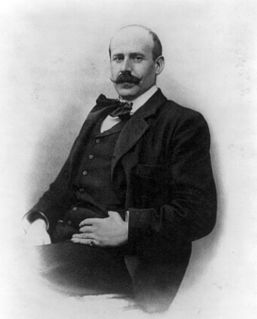 Ignacio Zuloaga y Zabaleta was a Spanish painter, born in Eibar (Guipuzcoa), near the monastery of Loyola. 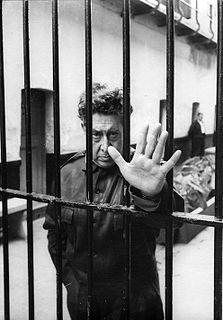 David Alfaro Siqueiros was a Mexican social realist painter, best known for his large public murals using the latest in equipment, materials and technique. Along with Diego Rivera and José Clemente Orozco, he was one of the most famous of the "Mexican muralists". He was a member of the Mexican Communist Party, and a Stalinist and supporter of the Soviet Union who led an unsuccessful attempt to assassinate Leon Trotsky in May 1940.

The Museo Nacional Centro de Arte Reina Sofía is Spain's national museum of 20th-century art. The museum was officially inaugurated on September 10, 1990, and is named for Queen Sofía. It is located in Madrid, near the Atocha train and metro stations, at the southern end of the so-called Golden Triangle of Art.

Guernica is a large 1937 oil painting on canvas by Spanish artist Pablo Picasso. It is one of his best-known works, regarded by many art critics as the most moving and powerful anti-war painting in history. It is exhibited in the Museo Reina Sofía in Madrid. 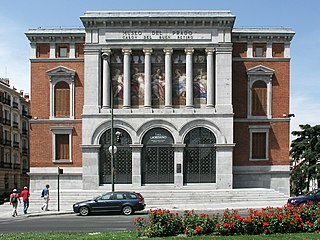 The Casón del Buen Retiro is an annex of the Museo del Prado complex in Madrid. Following major restoration work, which was completed in October 2007, it now houses the Museum's study centre and library.

Santos Balmori Picazo was a Spanish-Mexican painter whose heavily European style was not appreciated by his contemporaries of the Mexican muralism movement, but he had influence with the succeeding Generación de la Ruptura artists. He trained and began his art career in Europe moving later to Mexico City. He became a professor and researcher at the Escuela Nacional de Artes Plásticas training younger artists such as Rodolfo Nieto, Pedro Coronel, Carlos Olachea and Juan Soriano. As a teacher, he did not stop drawing but he did not paint professionally again until after retirement, having a number of exhibitions later in life.

Luis Arenal Bastar was a Mexican painter, engraver and sculptor. He was a founding member of the Liga de Escritores y Artistas Revolucionarios, the Taller de Gráfica Popular and the Salón de la Plástica Mexicana. In addition, he created murals and other monumental works in Mexico City and Guerrero.

"Abel" Antonio Pujol Jiménez was a Mexican painter and printmaker.

The Château of Vauvenargues is a fortified bastide in the village of Vauvenargues, situated to the north of Montagne Sainte-Victoire, just outside the town of Aix-en-Provence in the south of France. 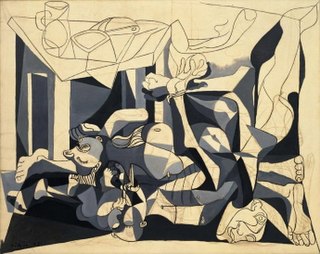 The Charnel House is a 1944–1945 oil and charcoal on canvas painting by Spanish artist Pablo Picasso, which is purported to deal with the Nazi genocide of the Holocaust. The black and white 'grisaille' composition centres on a massed pile of corpses and was based primarily upon film and photographs of a slaughtered family during the Spanish Civil War. It is considered to be Picasso's second major anti-war painting, the first being the monumental Guernica (1937), although it is smaller than its predecessor and unfinished. The painting is housed in the Museum of Modern Art in New York City.

Las Meninas is a series of 58 paintings that Pablo Picasso painted in 1957 by performing a comprehensive analysis, reinterpreting and recreating several times Las Meninas by Diego Velázquez. The suite is fully preserved at the Museu Picasso in Barcelona, it is known that he sold the first and second interpretations of the meninas to the American art collector Peggy Guggenheim, owner of the Art of this century gallery. This is a very extensive survey work which consists of 45 versions of the original picture, nine scenes of a dove, three landscapes and a portrait of Jacqueline.

Eusebio Sempere Juan was a Spanish sculptor, painter and graphic artist whose abstract geometric works make him the most representative artist of the Kinetic art movement in Spain and one of Spain's foremost artists. His use of repetition of line and mastery of color to manipulate the way light plays on the surface give depth to his pictorial compositions.

Ángeles Santos Torroella was a Catalan Spanish surrealist painter. Born in Portbou, Catalonia, she was the sister of the poet and art critic Rafael Santos Torroella. She married the painter Emili Grau Sala. Her son is the painter ca:Julià Grau i Santos. In 2003 she received the Gold Medal of Merit in the Fine Arts, awarded by the Ministry of Culture of Spain and in 2005, the Creu de Sant Jordi, awarded by the Government of Catalonia.

Juan Larrea was a Spanish essayist and poet.

José María Sicilia is a Spanish abstractionist painter who currently resides in Paris and Sóller.

The Pavelló de la República Library joined what is now the University of Barcelona's Learning and Research Resources Centre (CRAI) in 1996. It has since grown to become one of the world's leading archival libraries on subjects such as the Second Spanish Republic, the Spanish Civil War, exile, Francoist Spain and Spain's transition to democracy. In addition, the library has important materials on the Soviet Bloc and on the international political history of the twentieth history, particularly World War II.

Josep Renau Berenguer was an artist and communist revolutionary notable for his propaganda work during the Spanish Civil War. Among his production, it is remarkable his art deco period, his political propaganda during the Spanish Civil War, the photomurals of the Spanish Pavilion in the International Exhibition of 1937 in Paris, a series of photomontages titled Fata Morgana or The American Way of Life, and murals and paintings made in Mexico such as Tropic, dated in 1945.

Jesús Martí Martín (1899–1975) was a Spanish architect and painter. His first love was always painting, but he trained as an architect and was successful in this profession in Madrid in the years before the Spanish Civil War. During the civil war he helped preserve national artistic treasures from the destruction of Madrid, and also designed bomb shelters. After the fall of the Second Spanish Republic in 1939 he fled to France, where he was interned for two months, then made his way to Paris and on to exile in Mexico. He resumed his career as an architect in Mexico, but gradually abandoned architecture in favour of painting. He chose not to exhibit his work and was little known until he was finally persuaded to put on a show in Mexico City at the age of 70, when he was acclaimed as a master of modern Mexican art.

Luis Lacasa Navarro was a Spanish architect. His work in Spain and Paris before and during the Spanish Civil War (1936–39) was rationalist and functional. He is best known as co-designer of the Spanish Pavilion at the 1937 Paris Exposition, a work designed to showcase the modern legitimacy of the embattled Spanish Republic. After the war he went into exile in the Soviet Union.

Retrato de la Burguesía is a Mural Painting by David Alfaro Siqueiros and Josep Renau, created for the Mexican Electricists Syndicate to be painted in their main headquarters, located in the Antonio Caso Street, 45, in Ciudad de México.