The name Edna has been used to name seven tropical cyclones worldwide. 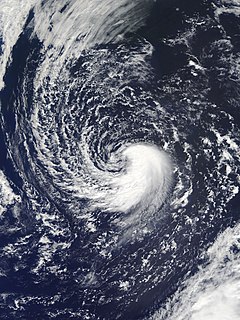 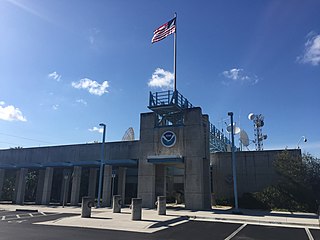 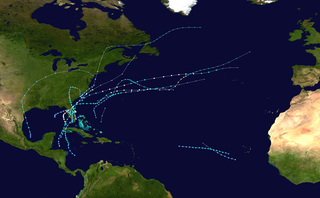 The 1968 Atlantic hurricane season was one of five Atlantic hurricane seasons during the satellite era not to feature a major hurricane, the others being 1972, 1986, 1994, and 2013. The season officially began on June 1 and lasted until November 30, dates which conventionally delimit the period of each year when most tropical cyclones form in the Atlantic basin. It was a below average season in terms of tropical storms, with a total of eight nameable storms. The first system, Hurricane Abby, developed in the northwestern Caribbean Sea on June 1. Abby moved northward and struck Cuba, bringing heavy rainfall and flooding to western portions of the island. Making landfall in Florida on June 4, Abby caused flooding and spawned four tornadoes, but left behind little damage. Overall, the hurricane resulted in six deaths and about $450,000 (1968 USD) in damage. In late June, Tropical Storm Candy brought minor flooding and spawned several tornadoes across portions of the Southern United States. Overall damage from the cyclone reached approximately $2.7 million. 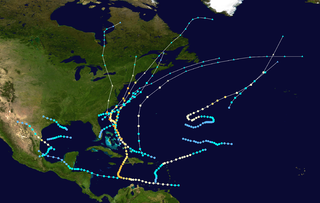 The 1954 Atlantic hurricane season resulted in over $750 million in damage, the most of any season at the time. It was an above-average season. The season officially began on June 15, and nine days later the first named storm developed. Hurricane Alice developed in the Gulf of Mexico and moved inland along the Rio Grande, producing significant precipitation and record flooding that killed 55 people. Activity was slow until late August; only Barbara, a minimal tropical storm, developed in July. In the span of two weeks, hurricanes Carol and Edna followed similar paths before both striking New England as major hurricanes. The latter became the costliest hurricane in Maine's history. 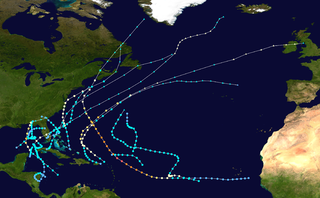 The 1953 Atlantic hurricane season was the first time an organized list of female names was used to name Atlantic storms. It officially began on June 15, and lasted until November 15, although activity occurred both before and after the season's limits. The season was active with fourteen total storms, six of which developed into hurricanes; four of the hurricanes attained major hurricane status, or a Category 3 or greater on the Saffir-Simpson scale.

Hurricane Edna was a deadly and destructive major hurricane that impacted the United States East Coast in September of the 1954 Atlantic hurricane season. It was one of two hurricanes to strike Massachusetts in that year, the other being Hurricane Carol. The fifth tropical cyclone and storm of the season, as well as the fourth hurricane and second major hurricane, Edna developed from a tropical wave on September 2. Moving towards the north-northwest, Edna skirted the northern Leeward Islands as a tropical depression before turning more towards the west. The depression attained tropical storm status to the east of Puerto Rico and strengthened further to reach hurricane status by September 7. The storm rapidly intensified and reached its peak intensity of 125 mph (205 km/h) north of the Bahamas before weakening to Category 2 status near landfall in Massachusetts on September 11. Edna transitioned into an extratropical cyclone in Atlantic Canada before its remnants dissipated in the northern Atlantic. 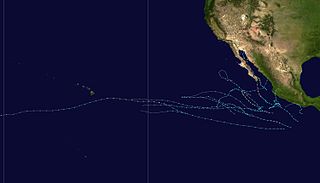 The 2003 Pacific hurricane season was the first season to feature no major hurricanes – storms of Category 3 intensity or higher – since 1977. It produced an unusually large number of tropical cyclones which affected Mexico. The most notable cyclones during the year were Hurricanes Ignacio and Marty, which killed 2 and 12 people in Mexico, respectively, and were collectively responsible for about US$1 billion in damage. Three other Pacific storms, two of which were hurricanes, and three Atlantic storms also had a direct impact on Mexico. The only other significant storm of the season was Hurricane Jimena, which passed just to the south of Hawaii, the first storm to directly threaten Hawaii for several years. 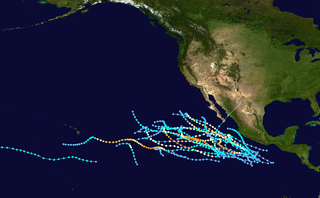 The 1990 Pacific hurricane season was a very active season which observed 21 named storms within the basin. The season also produced the fourth highest ACE index value on record. The season was officially started on May 15 in the eastern Pacific, and on June 1 in the central Pacific, and lasted until November 30. These dates conventionally delimit the period of each year when most tropical cyclones form in the northeastern Pacific Ocean. However, these bounds were slightly exceeded when Hurricane Alma formed on May 12. 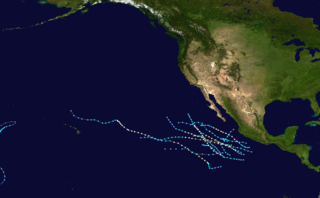 The 1980 Pacific hurricane season officially started May 15, 1980, in the eastern Pacific and June 1, 1980, in the central Pacific, lasting until November 30, 1980. These dates conventionally delimit the period of each year when most tropical cyclones form in the northeastern and central Pacific Ocean. This season was relatively uneventful; since no tropical cyclones made landfall, there were no reports of casualties or damage.

The following is a list of tropical cyclones by year. Since the year 957, there have been at least 12,791 recorded tropical or subtropical cyclones in the Atlantic, Pacific, and Indian Oceans, which are known as basins. Collectively, tropical cyclones caused more than US$1.2 trillion in damage, unadjusted for inflation, and have killed more than 2.6 million people. Most of these deaths were caused by a few deadly cyclones, including the 1881 Haiphong typhoon, the 1931 Shanghai typhoon, the 1970 Bhola cyclone, Typhoon Nina in 1975, the 1991 Bangladesh cyclone, and Cyclone Nargis in 2008.