The name Gil has been used for seven tropical cyclones in the Eastern Pacific Ocean. 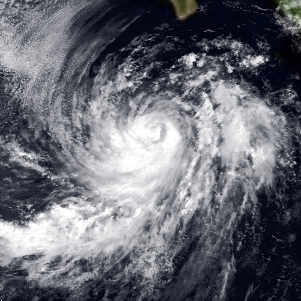 Hurricane Gil was the first of several tropical cyclones to affect Hawaii during the 1983 Pacific hurricane season. Gil originated from a tropical depression that developed near Clipperton Island on July 23. Steadily intensifying, it attained tropical storm status six hours later and was upgraded to a hurricane on July 26. After attaining peak intensity on July 27, Gil encountered cooler sea surface temperatures and began to weaken. Moving west-northwest, the weakening system also accelerated and on July 31, was downgraded to a tropical depression. However, Gil began to re-intensify on August 1, becoming a tropical storm again later that day. Initially expected to veer north of Hawaii, it continued west-northwest and began to approach the Hawaiian group on August 3. While passing through the island group, Gil reached its secondary peak intensity. Subsequently, Gil began to weaken once again as it threatened the Northwestern Hawaiian Islands. After passing through the islands, Gil was downgraded to a tropical depression on August 5. Several hours later, the storm dissipated. The remnants of the storm moved into the West Pacific late on August 6 and were last noted the next morning while passing south of Midway Island.

The name Gil has also been used for one tropical cyclone in the Western Pacific Ocean.

The name Gil has also been used for a fictional hurricane.

Hurricane Saturday is a one-off programming block of a three-way, two-hour crossover event on NBC which involved three television sitcoms created by Susan Harris: The Golden Girls, Empty Nest and Nurses. The event depicts a fictional hurricane storming into the storylines of the three series set in Miami, Florida. The episodes aired back-to-back on Saturday, November 9, 1991 from 8:00 to 10:00 p.m. EST.

The name Helene has been used for six tropical cyclones in the Atlantic Ocean:

The name Leslie has been used for three tropical cyclones in the Atlantic Ocean.

The 2001 Pacific hurricane season was a near average season. The most notable storm that year was Hurricane Juliette, which caused devastating floods in Baja, California, leading to 12 fatalities and $400 million worth of damage. Two other storms were notable in their own rights, Hurricane Adolph became the strongest May Hurricane until 2014 when both records set by Adolph and Juliette were broken by Hurricanes Amanda and Odile. Tropical Storm Barbara passed just north of Hawaii, bringing minimal impact. The season officially began on May 15, 2001 in the eastern Pacific, and on June 1, 2001 in the central Pacific, and lasted until November 30, 2001. These dates conventionally delimit the period of each year when most tropical cyclones form in this part of the Pacific Ocean. The first storm developed on May 25, while the last storm dissipated on November 3.

The 1995 Pacific hurricane season was the least active Pacific hurricane season since 1979. Of the eleven tropical cyclones that formed during the season, four affected land, with the most notable storm of the season being Hurricane Ismael, which killed at least 116 people in Mexico. The strongest hurricane in the season was Hurricane Juliette, which reached peak winds of 150 mph (240 km/h), but did not significantly affect land. Hurricane Adolph was an early-season Category 4 hurricane. Hurricane Henriette brushed the Baja California Peninsula in early September. 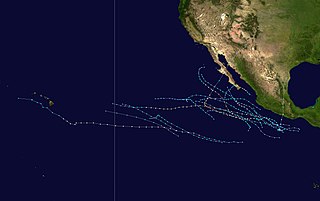 The 1989 Pacific hurricane season officially started on May 15, 1989, in the eastern Pacific, and June 1, 1989, in the central Pacific, and lasted until November 30, 1989. These dates conventionally delimit the period of each year when most tropical cyclones form in the northeastern Pacific Ocean. A total of 17 storms and 9 hurricanes formed, which was near long-term averages. Four hurricanes reached major hurricane status on the Saffir-Simpson Hurricane Scale.

The name Erick has been used for seven tropical cyclones in the Eastern Pacific Ocean.

The name Linda has been used for six tropical cyclones in the Northeastern Pacific Ocean:

The name Emily has been used for seven tropical cyclones in the Atlantic Ocean, and five tropical cyclones in the Eastern Pacific Ocean. It was used in the Eastern Pacific before the formal naming system was instituted, and then it was used on the old four-year lists. There were also two other Emily-named storms in the Indian Ocean and near Australia. 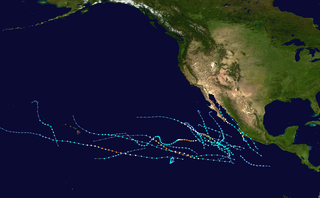 Since 1990, there have been 3,627 tropical or subtropical cyclones recorded in the Atlantic, Pacific, and Indian Oceans. Collectively, tropical cyclones since 1990 have killed more than 400,000 people, mostly from the 1991 Bangladesh cyclone and Cyclone Nargis. The storms collectively caused more than $1.2 trillion in damage, unadjusted for inflation.