El Tropicana Night Club in Havana, Cuba located in a lush, six-acre (24,000 m²) estate tropical garden opened on December 30, 1939 at the Villa Mina in Marianao. It is located next door to the old Colegio de Belen, presently, the Instituto Técnico Militar.

The Tropicana evolved out of a nightclub called Edén Concert, operated in the late 1930s by the late Cuban impresario Victor de Correa. The club was a combination casino and cabaret located on a rented property in Marianao from Guillermina Pérez Chaumont, known as Mina. The tropical gardens of the Villa Mina provided a natural setting for an outdoor cabaret. In December 1939, de Correa moved his company of singers, dancers and musicians into a converted mansion located on the estate. De Correa provided the food and entertainment, while Rafael Mascaro and Luis Bular operated the casino located in the chandeliered dining room of the estate's mansion. Originally known as El Beau-Site, de Correa decided to rename it The Tropicana. With a fanfare from the Alfredo Brito Orchestra El Tropicana opened on December 30, 1939. [4] Martín Fox, a gambler rented table space in the casino. By 1950 he took over the lease of what would become The Tropicana, he hired Max Borges Jr. to design an expansion that would be known as Los Arcos de Cristal.

Truffin Ave. & Linea (B-4544). "This claims to be the largest and most beautiful nightclub in the world. Located on what was once an extensive private estate, Tropicana has two complete sets of stages, table areas, and dance floors. If the weather is fine, the outdoor area is used; otherwise, everyone moves to the indoor area. Tall palm trees growing among the tables lend the proper tropical atmosphere and blend well with the ultra-modernistic architecture. Shows include 50-dancer chorus lines which often branch out into the trees. Rhythms and costumes are colorfully native (voodoo is a frequent theme.) Top names often star. Minimum at tables is $4.50 per person, but this can be avoided by sitting at the bar which has an adequate view of the stage." [5]

Max Borges designed a building composed of five reinforced concrete arches and glass walls over an indoor stage. [6] When the indoor cabaret opened on March 15, 1952, it had a combined total seating capacity of 1,700 for the interior and outside areas. The furniture designed by Charles and Ray Eames. The Arcos de Cristal won numerous international prizes. The Tropicana was one of six Cuban buildings included in the 1954 Museum of Modern Art exhibit entitled Latin American Architecture since 1945. [7] Henry Russell Hitchcock wrote the book Latin American architecture since 1945 for the occasion. [8] [lower-alpha 2] Borges won the Premio Anual, from the Colegio de Arquitectos in 1953 for his work on the Tropicana. The Arcos de Cristal may be seen in the Tropicana scene of the movie Our Man In Havana. [9]

Santo Trafficante Jr. (November 15, 1914 – March 17, 1987) was among the most powerful Mafia bosses in the United States. He headed the Trafficante crime family and controlled organized criminal operations in Florida and Cuba, which had previously been consolidated from several rival gangs by his father, Santo Trafficante Sr. Reputedly the most powerful crime boss in Batista-era Cuba, he never served a prison sentence in the US. Trafficante turned his father's criminal organization into a multi-billion dollar international organized crime empire. Trafficante was reportedly a multi-billionaire and wielded enormous power and influence all over the United States and Cuba by paying off police, judges, federal prosecutors, city officials, government officials, local and international politicians, mayors, governors, senators, congressmen, CIA agents and FBI agents.

Trafficante maintained links to the Bonanno crime family, in New York City, but was more closely allied with Sam Giancana in Chicago. Consequently, while generally recognized as the most powerful organized crime figure in Florida throughout much of the 20th century, Trafficante was not believed to have total control over Miami, Miami Beach, Ft. Lauderdale, or Palm Beach. The east coast of Florida was a loosely knit conglomerate of New York family interests with links to Meyer Lansky, Bugsy Siegel, Angelo Bruno, Carlos Marcello, and Frank Ragano.

Trafficante admitted his anti-Castro activities to the United States House Select Committee on Assassinations in 1978. Though he vehemently denied any association with a conspiracy against President John F. Kennedy, at least one witness before federal investigators testified that Trafficante predicted the assassination in spring of 1963. Federal investigators brought racketeering and conspiracy charges against him in summer of 1986. Santo Trafficante Jr. had been operating in Cuba since the late 1940s under his father, Santo Trafficante, Sr., a mobster in Tampa, Florida. After his father died in 1954, he became the head in Tampa and took over his father's interests in Cuba. [10]

Trafficante moved to Cuba in 1955, where he came into contact with Batista and Meyer Lansky. During the rule of Cuba's authoritarian dictator Fulgencio Batista, Trafficante openly operated the Sans Souci Cabaret and the Casino International gambling establishments in Havana. As a leading member of the syndicate, he also was suspected of having behind-the-scenes interests in other syndicate-owned Cuban casinos: the Hotel Habana Riviera, the Tropicana Club , the Hotel Sevilla-Biltmore, the Hotel Capri Casino, the Comodoro, the Hotel Deauville, and the Havana Hilton. Trafficante was apprehended in November 1957, along with over 60 other mobsters, at the Apalachin meeting in Apalachin, New York. [10] All were fined, up to $10,000 each, and given prison sentences ranging from three to five years. All the convictions were overturned on appeal in 1960. [11] [12] Cuba was one of the Apalachin topics of discussion, particularly the gambling and narcotics smuggling interests of La Cosa Nostra on the island. The international narcotics trade was also an important topic on the Apalachin agenda.[6] In January 1958, Trafficante was questioned by the Cuban police regarding the Apalachin meeting. A full report was made by the Cuban police, dated January 23, 1958, includes transcripts of long-distance telephone calls made from the Sans Souci during the period August–December 1957. The report was given to the District Attorney's office. In addition, "on January 23, 1958, the Cuban Department of Investigation, Havana, Cuba notified the Bureau of Narcotics that Santo Trafficante was registered in their Alien Office under No. 93461."

Fulgencio Batista y Zaldívar was a Cuban military officer and politician who served as the elected president of Cuba from 1940 to 1944 and as its U.S.-backed military dictator from 1952 to 1959, when he was overthrown by the Cuban Revolution.

Meyer Lansky, known as the "Mob's Accountant," was an American organized crime figure of Polish birth who, along with his associate Charles "Lucky" Luciano, was instrumental in the development of the National Crime Syndicate in the United States. 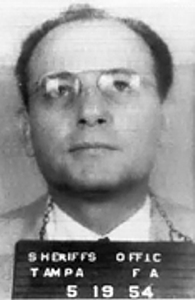 Santo Trafficante Jr. was among the most powerful Mafia bosses in the United States. He headed the Trafficante crime family and controlled organized criminal operations in Florida and Cuba, which had previously been consolidated from several rival gangs by his father, Santo Trafficante Sr.

The Apalachin meeting was a historic summit of the American Mafia held at the home of mobster Joseph "Joe the Barber" Barbara, at 625 McFall Road in Apalachin, New York, on November 14, 1957. Allegedly, the meeting was held to discuss various topics including loansharking, narcotics trafficking, and gambling, along with dividing the illegal operations controlled by the recently murdered Albert Anastasia. An estimated 100 Mafiosi from the United States, Italy, and Cuba are thought to have attended this meeting. Immediately after the Anastasia murder that October, and after taking control of the Luciano crime family from Frank Costello, Vito Genovese wanted to legitimize his new power by holding a national Cosa Nostra meeting.

Hotel Tryp Habana Libre is one of the larger hotels in Cuba, situated in Vedado, Havana. The hotel has 572 rooms in a 25-floor tower at Calle 23 and Calle L. Opened in 1958 as the Habana Hilton, the hotel famously served as the residence of Fidel Castro and other revolutionaries throughout 1959, after their capture of Havana. 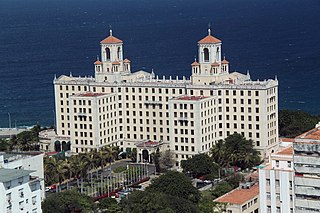 The Hotel Nacional de Cuba is a historic Spanish eclectic style hotel in Havana, Cuba, opened in 1930. Located on the sea front of Vedado district, it stands on Taganana Hill, offering commanding views of the sea and the city.

John Sebastian LaRocca was the Sicilian-born American boss of the Pittsburgh crime family from the 1950s until his death in 1984.

Max Borges Jr., born Max Borges Recio, was a Cuban architect best known for his work in Havana in the 1940s and 1950s. He later moved to the United States. 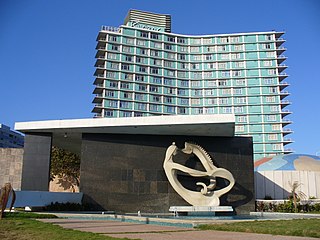 The Hotel Habana Riviera by Iberostar, originally known as the Havana Riviera, is a historic resort hotel located on the Malecón waterfront boulevard in the Vedado district of Havana, Cuba. The hotel, which is managed by the Spanish Iberostar chain, was built in 1957 and still maintains its original 1950s style. It has twenty-one floors containing 352 rooms all of which feature views of the water and the Vedado neighborhood.

The Trafficante crime family, also known as the Tampa Mafia, is an Italian-American Mafia crime family based in Tampa, Florida, United States. The most notable boss was Santo Trafficante, Jr. who ruled Tampa and the crime family with an iron fist. Author Scott Deitche reported that Santo Jr. was involved with the CIA to plot assassination attempts on Fidel Castro. After the death of Santo Jr. in 1987, the Tampa Mafia family has been controlled by Vincent LoScalzo.

Norman Rothman was an American gangster.

The Hotel Deauville is a historic hotel in Centro Habana located at Calle Galiano 1 on a corner with the Malecón promenade, and overlooking the Bay of Havana. The hotel was constructed as a casino hotel in 1957 by a consortium owned by American mobster Santo Trafficante Jr. 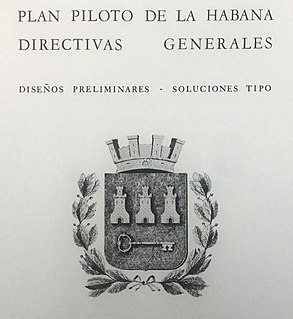 The Havana Plan Piloto was a 1955–1958 urban proposal by Town Planning Associates, which included Paul Lester Wiener, Paul Schulz, the Catalan architect Josep Lluis Sert, and Seely Stevenson of Value & Knecht, Consulting Engineers, seeking to combine "architecture, planning, and law", in a project heavily influenced by the politics of Fulgencio Batista which in turn were dictated by his involvement with the American Mafia and their desire to augment United States tourism, and thru his architects and various designers, the modernist principles of the Congrès Internationaux d'Architecture Moderne (CIAM) and the Athens Charter. The Charter got its name from the location of the fourth CIAM conference in 1933, which, due to the deteriorating political situation in Russia, took place on the in SS Patris II bound for Athens from Marseilles. This conference is documented in a film commissioned by Sigfried Giedion and made by his friend László Moholy-Nagy "Architects' Congress". The Charter had a significant impact on urban planning after World War II and, through Josep Lluis Sert and Paul Lester Wiener, on the proposed modernization of Havana and in an effort to erase all vestiges of the 16th-century city.

The Sans Souci was a nightclub within a natural environment and located in the outskirts seven miles outside of Havana. It had a restaurant and floor shows nightly that attracted a great number of tourists. Its greatest profits came from an amusement arcade operating located in a small room next door to the Sans Souci that was not advertised since there was no official license for its exploitation.

The Colegio de Belén located between 45th and 66th streets – situated next door to the Tropicana nightclub – in Marianao, Havana, was designed in 1925 by the architect Leonardo Morales y Pedroso and his brother the engineer Luis Morales y Pedroso of the firm Morales y Compañía Arquitectos.