Trostberg (German pronunciation: [ˈtʁoːstˌbɛʁk]]( listen )) is a town in the district of Traunstein, in Bavaria, Germany. It is situated on the river Alz, 19 km northwest of Traunstein. As with other 'old towns' in the region, it is a popular local tourist spot.

About 1,400 people are employed at the Chemiepark Trostberg, a large chemical industrial area near the town. The two main companies are AlzChem and BASF Bauchemie (construction chemistry). [2] The Chemiepark Trostberg originated from a calcium cyanamide production plant, founded in 1908. Between 1978 and 2000, the company was called SKW Trostberg AG. [3]

During World War II, a subcamp of Dachau concentration camp was located in the town. [4]

Altötting is a Landkreis (district) in Bavaria, Germany. It is bounded by Austria and the Bavarian districts of Traunstein, Mühldorf and Rottal-Inn.

Traunstein is a town in the south-eastern part of Bavaria, Germany, and is the administrative center of a much larger district of the same name. The town serves as a local government, retail, health services, transport and educational center for the wider district.

Chiemsee is a freshwater lake in Bavaria, Germany, near Rosenheim. It is often called "the Bavarian Sea". The rivers Tiroler Achen and Prien flow into the lake from the south, and the river Alz flows out towards the north. The Alz flows into the Inn which then merges with the Danube. The Chiemsee is divided into the bigger, north section, in the northeast, called Weitsee, and the Inselsee, in the southwest. 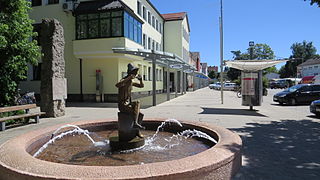 Traunreut is a town in southeastern Bavaria, Germany in the Traunstein district. It is located at 47°58′N12°35′E. Traunreut lies in the heart of the Chiemgau region between Munich and Salzburg, approximately 10 km east of the Chiemsee, 25 km north of the Alps, and 35 km west of Salzburg. Its population is approximately 21,000. Companies present in the area include Siteco Beleuchtungstechnik GmbH, Dr. Johannes Heidenhain GmbH, Bosch and Siemens Household Appliances, BSH, and other midsize firms.

The Syngenta Group is a leading global provider of agricultural science and technology, in particular seeds and crop protection products, with its headquarters in Basel and further locations in Chicago, Tel Aviv, and Shanghai. Syngenta was founded in 2000 and acquired by China National Chemical Corporation (ChemChina) in 2015. In 2020, the Syngenta Group was formed, bringing together Syngenta, Adama, and the agricultural business of Sinochem under a single entity.

Cyanamide is an organic compound with the formula CN2H2. This white solid is widely used in agriculture and the production of pharmaceuticals and other organic compounds. It is also used as an alcohol-deterrent drug in Canada, Europe, and Japan. The molecule features a nitrile group attached to an amino group. Derivatives of this compound are also referred to as cyanamides, the most common being calcium cyanamide (CaCN2).

The Alz is a river in Bavaria, southern Germany, the only discharge of the Chiemsee. Its origin is on the northern shore near Seebruck. It is a right tributary of the Inn, into which it flows in Marktl. Other towns on the Alz are Altenmarkt an der Alz, Trostberg, Garching an der Alz and Burgkirchen an der Alz.

Seeon-Seebruck is a municipality in the district of Traunstein in southern Bavaria in Germany.

Altenmarkt an der Alz is a municipality in the district of Traunstein in Bavaria, Germany.

Tacherting is a municipality in the north of the district of Traunstein in Bavaria, Germany.

The Stadler Regio-Shuttle RS1 is the first widely used, new-generation, diesel railcar in Germany and Czech Republic for local railway services. Its most characteristic feature is the trapezium-shaped window frames. The Regio-Shuttle is classified by the Deutsche Bahn as Class 650, by the České Dráhy as Class 840 or Class 841, however numerous private railways have their own Regio-Shuttles. 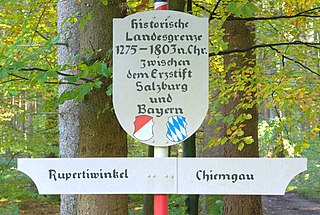 The Rupertiwinkel is a small historic region on the southeastern border of Bavaria, Germany. Part of the Archbishopric of Salzburg until the early 19th century, it is named after the first Salzburg bishop Saint Rupert (c.660–710), apostle to the Duchy of Bavaria.

The Rosenheim–Salzburg railway is a continuous double track and electrified main line railway almost entirely within the German state of Bavaria. It is an international transport corridor, linking Rosenheim to Salzburg in Austria.

Mühldorf (Oberbayern) station is a railway junction and station in the district town of Mühldorf in the German state of Bavaria. The station has seven platform tracks and is classified by Deutsche Bahn as a category 4 station. The station is served by 105 passenger trains each day operated by the Südostbayernbahn and frequented by about 10,000 travellers. It is also the central station of the “Bavarian Chemical Triangle”. About 800 freight wagons are dispatched from it daily. 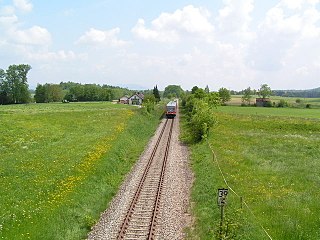 The Mühldorf–Freilassing railway is a major railway in Bavaria. The line, which is operated by the Südostbayernbahn (SOB), runs from Mühldorf to Freilassing in the German state of Bavaria. 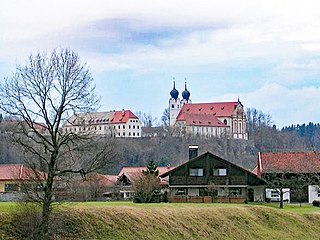 Baumburg Abbey is a former monastery of Augustinian Canons Regular in the northern Traunstein district of Bavaria, Germany. It was founded in 1107-09 and dissolved in 1803. Today Baumburg is a Catholic deanery that covers the parishes of the northern Chiemgau. 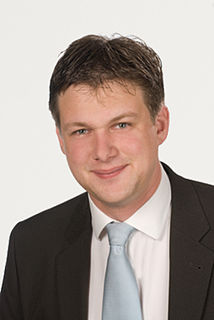 Tobias Josef Zech is a German politician of the Christian Social Union in Bavaria (CSU).

Peter Löw is a German lawyer and entrepreneur.