Last updated January 14, 2022
In this Spanish name, the first or paternal surname is Yepezand the second or maternal family name is Obando.

Yepez was born in San Gabriel, Carchi, on January 17, 1940. Second son of Rodolfo Yepez and Otilia Obando, he was an outstanding student in his classrooms. Together with his two brothers he moved to Quito in 1954, where he first attended "Instituto Nacional Mejía" High School, and later the Central University of Ecuador, where he gained his engineer degree in 1964. The University Council awarded him with a gold medal for his achievements and distinguished him with the title of "the best student of all times". Married with Genoveva Navarrete, he had two daughters, Vivian and Yarka.

Yepez has contributed to the Ecuadorian chess history with remarkable distinctions and particular style. His first national Championship, was held after a nine-hour match, when he defeated Francisco Aguirre with a final score of 2½–½, using the Grünfeld Defence. [5] Another outstanding fact, was registered in the Tournament "Ecopetrol - El Tiempo", where Yepez recorded a historic draw by agreement with Henrique Costa Mecking. This match was one of the most memorable of his career.[ according to whom? ] [6] In the same event, he gained remarkable victories over Carlos Cuartas "El Mago" (National Colombian Champion), and Miguel Cuéllar in the well remembered 84-movement and nine-hour match, which was the longest of the contest. [7] [8]

In an effort to promote chess locally, Yepez and friends founded the "Club de Ajedrez Quito". During its existence, the Club organized some local tournaments with the best national chess players at the time, but finally it was closed due to lack of financial support.

In his last days, while struggling against the hardships of his illness, he managed to play his last matches in bed, leaving a chess book on his night table marked in a certain page with a little chess horse just a few days before his death on August 2, 2010.

Alejandro Carrión Aguirre was a poet, novelist and journalist. He wrote the novel La espina (1959), the short story book La manzana dañada (1983), and numerous poetry books. As a journalist he published many of his articles under the pseudonym "Juan Sin Cielo." In 1956 he founded, along with Pedro Jorge Vera, the political magazine La Calle. He directed the literary magazine Letras del Ecuador. He received the Maria Moors Cabot prize (1961) from the Columbia University Graduate School of Journalism as well as the Ecuadorian National Prize Premio Eugenio Espejo (1981) for his body of work. He was the nephew of Benjamín Carrión and Clodoveo Carrión. 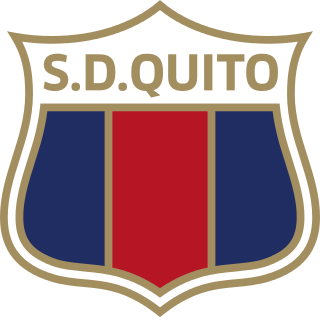 Sociedad Deportivo Quito is an Ecuadorian non-professional club football club based in Quito. For most of its existence, it competed in Serie A, the highest level of the Ecuadorian professional football league. And currently competes in the Segunda Categoría de Pichincha. Deportivo Quito has won five Serie A titles in 1964, 1968, 2008, 2009, and 2011. This places them fifth overall. The club also has four Interandean Tournament titles in 1955, 1956, 1957, and 1963. Additionally, the club was runner up in 1985, 1988, and 1997. Based on its style of play, sports journalists and fans nicknamed the club La Academia de los Ecuatorianos desde 1940.

The Liga Pro Banco Pichincha, simply known as the Liga Pro, or the Serie A, is a professional football league in Ecuador. At the top of the Ecuadorian football league system, it is the country's premier football competition. Contested by sixteen clubs, it operates a system of promotion and relegation with the Serie B, the lower level of the Primera Categoría. The season runs from February to December and is usually contested in multiple stages. The main sponsor is Banco Pichincha and it is known as Liga Pro Banco Pichincha. 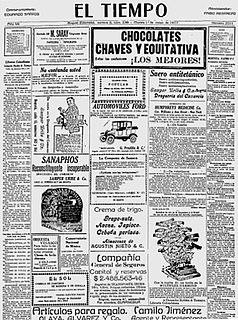 El Tiempo is a nationally distributed broadsheet daily newspaper in Colombia launched on January 30th, 1911. As of 2019, El Tiempo has the highest circulation in Colombia with an average daily weekday of 1,137,483 readers, rising to 1,921,571 readers for the Sunday edition. After longtime rival El Espectador was reduced to a weekly publication following an internal financial crisis in 2001, El Tiempo enjoyed monopoly status in Colombian media as the only daily that circulated nationally, as most smaller dailies have limited distribution outside their own regions. However, El Espectador returned to the daily format on May 11, 2008.

Rumiñahui or Rumiñawi is a canton of Pichincha Province in Ecuador. Its seat is Sangolquí. The canton lies southeast of Quito Canton and forms a suburb of Quito. 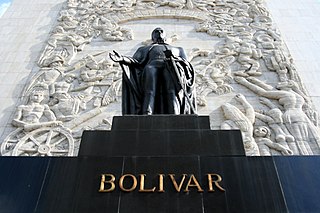 The Bolivarian Games are a regional multi-sport event held in honor of Simón Bolívar, and organized by the Bolivarian Sports Organization. The event is open to athletes from Bolivia, Colombia, Ecuador, Panama, Peru, and Venezuela. In 2010, the ODEBO decided to include Chile as seventh member of ODEBO. Except Panama, all other participating countries are Andean states.

César Muñoz Vicuña (1929–2000) was an Ecuadorian chess master. An amateur, he was an engineer by profession.

Jorge Alberto Rubinetti was an Argentine international chess master. He won the Argentine Chess Championship four times and competed at eight Chess Olympiads. He also played in two Interzonals in 1970 and 1982.

The 2009 Campeonato Ecuatoriano de Fútbol de la Serie A was the 51st season of the Serie A, Ecuador's premier football league. The season began on January 31 and ended on December 7. Deportivo Quito successfully defended their title for their fourth overall. 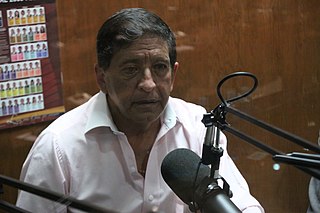 Paúl Fernando Carrera Velasteguí, known better as Polo Carrera, is an Ecuadorian retired football player and former manager. He has played for clubs in Ecuador and Uruguay, as well as the Ecuadorian football team

Eduardo Estrella Aguirre was an Ecuadorian doctor and researcher who published Flora Huayaquilensis: The Botanical Expedition of Juan Tafalla 1799-1808.

Jaime Enrique Aymara Reinoso is a singer and actor Ecuador of tecnocumbia, tecnopaseíto bachata, national music, pasillo, pump Bolero, guayno jukebox pop music merengue, pop-flamenco, cumbia pop ballads, salsa, vallenato reggaeton and waltz. The lyrics of their songs are based on true stories of people in their country is known as "The idol of Ecuador" and "The idol of Quinceañeras", besides being much in demand in Latin concerts performed abroad as it is known for Ecuadorian emigrants.

Elisa Mújica Velásquez was a Colombian writer. She published novels, short stories, essays, books for children as well as interviews, book reviews and columns for local newspapers El Tiempo and El Espectador. She was a member of the Academia Colombiana de la Lengua and the Real Academia Española. In 2018 the award Premio Nacional de Narrativa Elisa Mújica was created in order to recognize the work of unpublished female authors and to honor her 100th birth anniversary.

Joshua Daniel Ruiz Castillo is a Colombian chess player. He was awarded the title of Grandmaster by FIDE in 2019.

Jacqueline Andrea Factos Henao is an Ecuadorian karate martial artist. When she was 19 she joined the Concentracion Deportiva de Pichincha where she is trained by Luis Valdivieso and became part of the National Karate Team.

The chess competition for the 1938 Bolivarian Games took place in Bogotá from 10 to 20 August 1938. Six men competed in a double round-robin tournament held at Del Rosario University.