The Trou de Fer ("Iron Hole") is a canyon on Reunion Island, off the coast of Madagascar in the Indian Ocean. The primary river flowing through the gorge, which is up to 300 m (1,000 ft) deep, is the Bras de Caverne River, a tributary of the Rivière du Mât. The canyon has two distinct parts: a large crater, which is fed by six prominent waterfalls, and a narrow slot canyon at its outlet, which constitutes most of the canyon's length. The canyon starts at the waterfall of the Bras Mazerine stream and after some 1.4 - 1.8 km from the left side joins the main Bras de Caverne stream. [1] The Bras de Caverne River enters the canyon with a waterfall about 200 m (660 ft) high. This drop is usually dry or has very little water, [2] but between that and the next, 180-metre (590 ft) drop, springs feed the river, which drops over this then drops over a final 300-metre (1,000 ft) undercut cliff into the Trou de Fer in a narrow plume of water. [3]

Directly to the left of this waterfall, another stream drops over the cliff, which is undercut to an extent that its lip has over 200 m (660 ft) of empty space between it and the canyon floor, of approximately the same height in two channels, and slams onto a ledge before emptying into the same pool as the Bras de Caverne waterfall. This waterfall is not as high, and has a smaller water flow. It is fed by several other falls streaming off the cliffs above it. Further to the left, at about twice the distance from the first falls to the second, another large stream plunges into the canyon. [4] In total, there are at least six waterfalls feeding the canyon. At the base of the canyon, a separate slot canyon, or "The Narrows", begins. The water from the Bras de Caverne waterfall and the waterfall to its left drain into the slot canyon at a 90-degree angle, through a waterfall known informally as the "Washing Machine". [5] The name stems from the mist it generates, which drenches people who stand near the base of the falls. [6]

The slot canyon, or "The Corridor", extends for about 3 km (1.9 mi), and is said to be commonly dammed up by debris jams to form lakes, including the "Lake of the Eel". [6] Many springs flow through the porous volcanic rock of the walls, creating countless waterfalls. [7]

The team of Pascale Lapoule, Laurent Broisin and Pascal Colas were the first to climb/walk the canyon on 19–21 September 1989. [1] 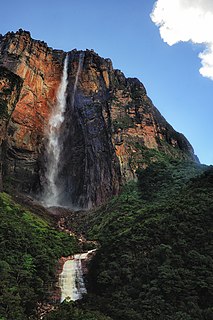 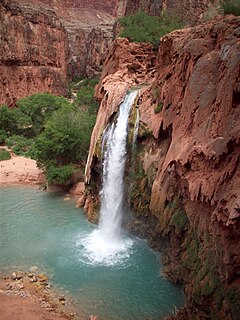 Havasu Falls is a waterfall of Havasu Creek, located in the Grand Canyon, Arizona, United States. It is within Havasupai tribal lands. 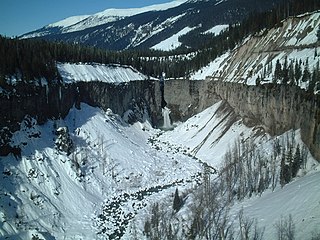 Keyhole Falls is the unofficial name for the largest waterfall along the Lillooet River in British Columbia, Canada. The falls are 115 feet (35 m) high and are a punchbowl type of waterfall. 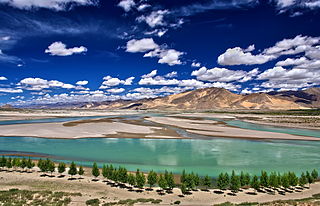 The Yarlung Tsangpo, also called Yarlung Zangbo or Yalu Zangbu is the upper stream of the Brahmaputra River located in the Tibet Autonomous Region, China. It is the longest river of Tibet.

Rainbow Falls is a waterfall on the Missouri River in Great Falls, Montana, just upstream from Crooked Falls and downstream from Colter Falls and Rainbow Dam. It is 47 feet (14m) high and 1,320 feet (402.3m) wide. The waterfall is part of the five Great Falls of the Missouri. The river spills over a sheer ledge of sandstone in the Kootenai Formation, forming the falls. The falls used to flow with a great deal of force year-round. In 1914 the river shortly upstream was dammed for hydroelectric power by the Rainbow Dam, which forms a run-of-the-river reservoir. As a result, the falls can almost totally dry up in the summer with only a few narrow strips of water trickling down its face. A railroad bridge crosses the river directly above the falls.

Tip Toe Falls, is a 6-foot (1.8 m) tall waterfall on Fall Creek in the Portola Redwoods State Park, California. There is also a 8-foot (2.4 m) upper falls, a few hundred feet upstream, which is much lesser known.

Jiao Lung Waterfall is the tallest measured waterfall in Taiwan, with a sheer plunge of 600 metres (2,000 ft). It is located on a cliff of Mount Da Ta in Alishan Township, Chiayi County. Its closest settlement is the small hamlet of Fengshan (豐山村). Predominantly seasonal, it has been known to have much reduced flow just several days after rain. Although often said to be the tallest waterfall in the Far East, this is not the case, as there are several waterfalls in China, and possibly even Taiwan itself, that are even higher.

The valley of the West Fork Foss River contains a fair amount of waterfalls. The river heads in a series of large lakes: Big Heart Lake, Angeline Lake, and Otter Lake- which form spectacular waterfalls as they plunge down to Delta Lake. On the valley walls downstream of Delta Lake, are found even more waterfalls. 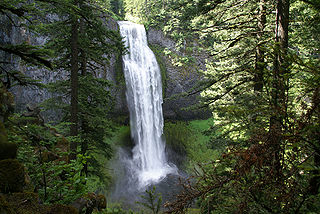 Sulphide Creek is a 2.5-mile (4.0 km) glacial tributary of the Baker River in Whatcom County in the U.S. state of Washington, draining a steep and narrow canyon on the southeast flank of Mount Shuksan, inside North Cascades National Park. Although called a creek, it is river-like due to its high volume. The creek is fed by the "massive" Sulphide and Crystal glaciers above Sulphide Lake and it runs east collecting several small tributaries before flowing into the Baker River at elevation 869 feet (265 m). There are several very tall waterfalls occurring on the creek and its tributaries, the largest of which is Sulphide Creek Falls. 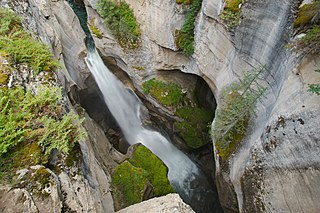 Maligne Canyon is a slot canyon located in the Jasper National Park near Jasper, Alberta, Canada. Eroded out of the Palliser Formation, the canyon measures over 50 metres (160 ft) deep. Popular for sightseeing and exploration, the area contains waterfalls, underground stream outlets, birds and plant life.