Troubridge may refer to:

Amelia Troubridge is a British photographer.

Troubridge Hill is a hill on the south coast of Yorke Peninsula in South Australia located in the locality of Honiton about 13.5 kilometres south west of Edithburgh and about 3.8 kilometres west of Troubridge Point. It was discovered, reported as being a ’hummock upon this low part ’ and named by Matthew Flinders on 24 March 1802 after Sir Thomas Troubridge, 1st Baronet. Since 1980, it has been the site of an operating lighthouse known as the Troubridge Hill Lighthouse. Its adjoining coastline borders a protected area of the same name - the Troubridge Hill Aquatic Reserve. 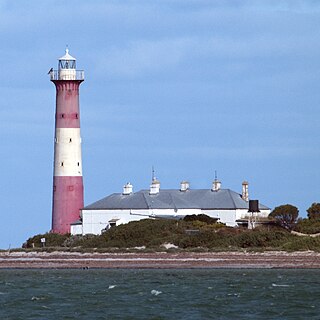 Troubridge Island is an island located in the south west corner of Gulf St Vincent in South Australia near the eastern edge of the Troubridge Shoals off the east coast of Yorke Peninsula about 8 kilometres (5.0 mi) southeast by east of the town of Edithburgh It is notable for being a site of an operating lighthouse from 1856 until 2002 and as a site for a sea bird rookery. Since 1982, the island has been part of the Troubridge Island Conservation Park.

Troubridge Point is a headland in the Australian state of South Australia located on the south coast of Yorke Peninsula about 11 kilometres south west of Edithburgh. It is the western end of the opening to Gulf St Vincent.

HMS Troubridge was a T-class destroyer of the British Royal Navy that saw service during the Second World War.

MV Troubridge was a ferry that served the South Australian coastal trade between Port Adelaide, Kingscote on Kangaroo Island and Port Lincoln. It was built by Evans Deakin, of Brisbane, Queensland as a roll on roll off ferry to minimise loading time and maximise time spent at sea.

Charles Ross may refer to: 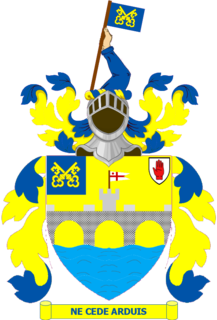 Austen is both a surname and a masculine given name. Notable people with the name include:

Masterman may refer to: 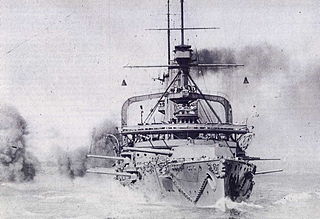 The Commander-in-Chief, East Indies was a Royal Navy admiral and the formation subordinate to him from 1865 to 1958. Even in official documents, the term East Indies Station was often used. In 1941 the ships of the China Squadron and East Indies Squadron and were merged to form the Eastern Fleet under the control of the Commander-in-Chief, Eastern Fleet. The China Station then ceased as a separate command. The East Indies Station and its shore establishments continued until disbandment in 1958.

HMS Blenheim was a 90-gun second-rate ship of the line of the Royal Navy, launched on 5 July 1761 at Woolwich. In 1797 she participated in the Battle of Cape St Vincent. In 1801 Blenheim was razeed to a Third Rate. She disappeared off Madagascar with all hands in February 1807.

Rear-Admiral Sir Thomas Louis, 1st Baronet was an officer of the Royal Navy who saw action during the American Revolutionary War and the French Revolutionary Wars. He was one of Horatio Nelson's "Band of Brothers" in the Mediterranean in 1798, commanding a ship at the Battle of the Nile. Later, he was second in command at the Battle of San Domingo, for which service he was made a baronet.

Bickerton is a surname which may refer to: