Trousseau or Trousseau Noir, also known as Bastardo and Merenzao, is an old variety of red wine grape originating in eastern France. [1] It is grown in small amounts in many parts of Western Europe; the largest plantations are today found in Portugal, where most famously it is used in port wine. It makes deep cherry red wines with high alcohol and high, sour candy acidity, and flavours of red berry fruits, often complemented - depending on production - by a jerky nose and an organic, mossy minerality.

Trousseau originated in eastern France where it was once widely cultivated, and DNA profiling has indicated that the variety has a parent-offspring relationship with Savagnin, and that it is a sibling to Chenin blanc and Sauvignon blanc. [1] DNA profiling has likewise shown that Trousseau has been cultivated on the Iberian Peninsula for at least 200 years under several different names, including Bastardo, but it is unknown how it came to be introduced there.

Trousseau gris is a white mutation of Trousseau Noir, occasionally found in Jura and once common in California under the name 'Gray Riesling'.

Genouillet is the result of a cross between Gouais blanc (Heunisch) and Bastardo. [2]

Bastardo was crossed with the Georgian variety Saperavi to produce the Bastardo Magarachskii variety used in the Crimea.

A little is grown in Argentina and in several regions of Spain, including the Canary Islands.

There are a small number of producers of Trousseau in Australia with plantings in Tasmania, Margaret River in Western Australia (Amato Vino release a small quantity each year in the Jura style) and Barossa Valley, South Australia. A small amount is also grown in eastern Australia under the name Gros Cabernet.

Trousseau is one of five grape varieties allowed in the Jura wine appellations, but only covers 5% of the Jura vineyards since it requires more sun than other Jura varieties to ripe. It is often used to stiffen blends with the pale Poulsard, which is easier to cultivate. In 2009, there was a total of 172 hectares (430 acres) of Trousseau in France. [1]

It is part of the blend for port wine and also an important variety for red wines in the Dão. A total of 1,218 hectares (3,010 acres) of Trousseau, mostly under the name Bastardo, is cultivated in the vineyards of Portugal. [1] It is also grown in very small quantities in Madeira, and a small number of vintage wines labelled Bastardo were made. [3]

In Spain Trousseau is grown under the names of Merenzao, Bastardo, Bastardo Negro, María Ordoña, Maturana Tinta, Tintilla, and Verdejo Negro. It is an authorised variety in the Galician DOPS of Ribiera Sacra and Valdeorras DOPs in Galicia. It has also been included in Rioja DOCa under the name of Maturana Tinta, but it is listed as a separate variety to Trousseau / Merenzao even though they are genetically indistinct. [1]

As in Portugal, it is used to make fortified wines in California.

Additionally, a select set of winemakers are experimenting with making table wines with the grape.

It needs hot, dry conditions to do well. The name Trousseau (from Old French trusse, meaning "a bundle") is possibly a reference to the shape of the bunch, it looks 'packed up'.

In the literature, it is often confused with Tressot. [4] 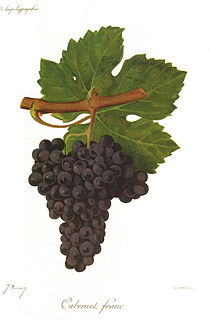 Cabernet Franc is one of the major black grape varieties worldwide. It is principally grown for blending with Cabernet Sauvignon and Merlot in the Bordeaux style, but can also be vinified alone, as in the Loire's Chinon. In addition to being used in blends and produced as a varietal in Canada and the United States, it is sometimes made into ice wine in those regions. 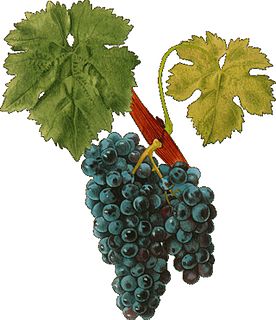 Carignan is a red grape variety of Spanish origin that is more commonly found in French wine but is widely planted throughout the western Mediterranean and around the globe. Along with Aramon, it was considered one of the main grapes responsible for France's wine lake and was a substantial producer in jug wine production in California's Central Valley but in recent years, it has been reborn as a flagship wine for many cellars in the south of France as well as in Catalonia. 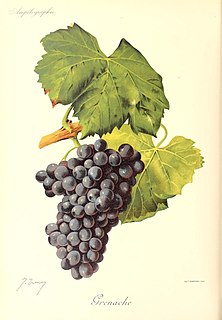 Grenache or Garnacha is one of the most widely planted red wine grape varieties in the world. It ripens late, so it needs hot, dry conditions such as those found in Spain, where the grape most likely originated. It is also grown in the Italian island of Sardinia, the south of France, Australia, and California's Monterey AVA and San Joaquin Valley.

Tempranillo is a black grape variety widely grown to make full-bodied red wines in its native Spain. Its name is the diminutive of the Spanish temprano ("early"), a reference to the fact that it ripens several weeks earlier than most Spanish red grapes. Tempranillo has been grown on the Iberian Peninsula since the time of Phoenician settlements. It is the main grape used in Rioja, and is often referred to as Spain's noble grape. The grape has been planted throughout the globe's wine regions.

Petit Verdot is a variety of red wine grape, principally used in classic Bordeaux blends. It ripens much later than the other varieties in Bordeaux, often too late, so it fell out of favour in its home region. When it does ripen it adds tannin, colour and flavour, in small amounts, to the blend. Petit verdot has attracted attention among winemakers in the New World, where it ripens more reliably and has been made into single varietal wine. It is also useful in 'stiffening' the mid palate of Cabernet Sauvignon blends. 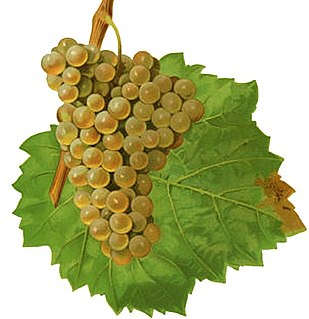 Gouais blanc or Weißer Heunisch is a white grape variety that is seldom grown today but is important as the ancestor of many traditional French and German grape varieties. The name Gouais derives from the old French adjective ‘gou’, a term of derision befitting its traditional status as the grape of the peasants. Likewise, the German name Weißer Heunisch labels it as one of the lesser "Hunnic" grapes. 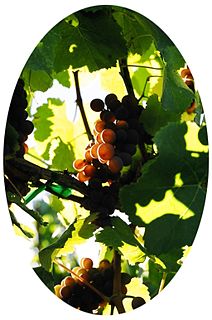 Tressot or Tressot noir is a variety of dark-skinned wine grape. Tressot has historically been grown in Burgundy but it is now almost extinct. Some small plantations still remain in the Chablis district of Burgundy. 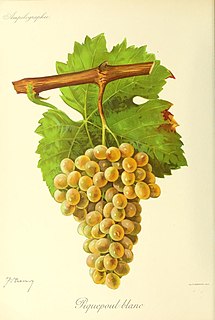 Piquepoul, Picpoul, or Picapoll is a variety of wine grape grown primarily in the Rhone Valley and Languedoc regions of France as well as Catalonia, Spain. It exists both in dark-skinned and light-skinned versions, as well as a very little grown Piquepoul gris. Piquepoul blanc is the most common of the Piquepouls, with 1,000 hectares cultivated in France in 2000, and an increasing trend. 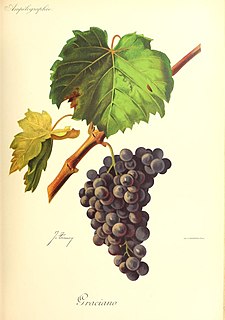 Graciano is a Spanish red wine grape that is grown primarily in Rioja. The vine produces a low yield that are normally harvested in late October. The wine produced is characterized by its deep red color, strong aroma and ability to age well. Graciano thrives in warm, arid climates.

Valle de Güímar is a Spanish Denominación de Origen Protegida (DOP) for wines located along the south-eastern coastline of Tenerife, and acquired its DO in 1996.

Alicante Ganzin is a red French wine grape variety. Unlike most Vitis vinifera wine grapes, Alicante Ganzin is a teinturier with dark flesh that produces red juice. Most varieties used to produce red wine, such as Cabernet Sauvignon, Syrah, etc., have clear color flesh and juice with the wine receiving its color through a maceration process where the color seeps out of the grape skins for as long as they are in contact with the juice. Alicante Ganzin can thus produce light red and rose colored wine without maceration. It is believed that Alicante Ganzin is often described as the progenitor of all French teinturier grapes.

Olmo grapes are wine and table grape varieties produced by University of California, Davis viticulturist Dr. Harold Olmo. Over the course of his nearly 50-year career, Dr. Olmo bred a wide variety of both grapes by means of both crossing varieties from the same species or creating hybrid grapes from cultivars of different Vitis species.

Royalty is a rouge Californian wine grape variety that was developed in 1938 by Dr. Harold P. Olmo of the University of California, Davis. The grape is a red fleshed teinturier which, unlike most red wine grapes, will produced red-tinged colored wine even without maceration time on the skins. The grape is a hybrid being produced from the Vitis vinifera Trousseau gris variety from the Jura wine region of France and the teinturier grape Alicante Ganzin that, itself, is a hybrid of a Vitis rupestris variety and the Vitis vinifera grape Aramon.

Béquignol noir is a red French wine grape variety that originated in Southwest France but is now more widely grown in the Mendoza wine region of Argentina where it is often used to add color to blends. The grape is often confused with several other red wine varieties such as Cabernet Franc, Durif, Fer and Prunelard with Béquignol noir sharing several synonyms with these grapes. However DNA profiling has shown Béquignol noir to be distinct from those grape varieties. Further research in 2011 showed that Béquignol noir may have a parent-offspring relationship with the Savagnin grape.