Troy Clarke may refer to:

Cassandra or Kassandra, , was a woman in Greek mythology cursed to utter true prophecies, but never to be believed. In modern usage her name is employed as a rhetorical device to indicate someone whose accurate prophecies are not believed.

Troy Fitzgerald Brown is a former American football wide receiver in the National Football League (NFL). He was drafted by the New England Patriots in the eighth round of the 1993 NFL Draft. He played college football at Marshall. On May 11, 2010, Brown was elected into the College Football Hall of Fame. In June 2012, Brown was voted into the New England Patriots Hall of Fame by fan vote. 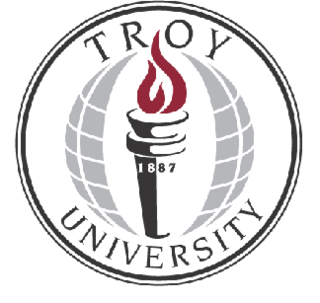 Troy Aumua Polamalu is a former American football strong safety who played his entire twelve-year career for the Pittsburgh Steelers of the National Football League (NFL). He played college football for the University of Southern California (USC) and earned consensus All-American honors. He was chosen by the Steelers in the first round of the 2003 NFL Draft. He was a member of two of the Steelers' Super Bowl championship teams and was the NFL Defensive Player of the Year in 2010. Polamalu is an eight time Pro-Bowler and a six time All-Pro selection. He was also the Head of Player Relations of the Alliance of American Football. 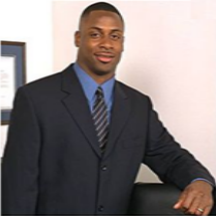 Troy Davis is a former American college and professional football player who was a running back in the National Football League (NFL) and Canadian Football League (CFL). He played college football for Iowa State University where he was a Heisman finalist. Troy Davis twice earned All-American honors and was the first and only NCAA Division I-A running back to rush for over 2,000 yards in back-to-back seasons. In 2016, he was inducted into the College Football Hall of Fame. He played professionally for the New Orleans Saints of the NFL, and the Hamilton Tiger-Cats, Edmonton Eskimos and Toronto Argonauts of the CFL, and was a member of the Eskimos' Grey Cup championship team in 2005. 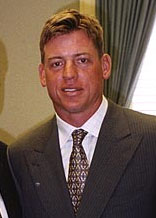 Troy Kenneth Aikman is an American former professional football player who was a quarterback for the Dallas Cowboys in the National Football League (NFL). The first overall pick of the 1989 NFL Draft, Aikman played twelve consecutive seasons as the starting quarterback with the Cowboys, the most number of seasons by any Cowboy quarterback. During his career he was a six-time Pro Bowl selection, led the team to three Super Bowl victories, and was the MVP of Super Bowl XXVII. Aikman was elected to the Pro Football Hall of Fame in 2006 and to the College Football Hall of Fame on December 9, 2008 in New York City. 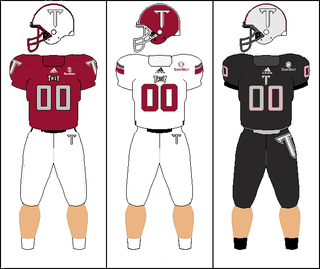 The Troy Trojans football program represents Troy University in Troy, Alabama, in the NCAA Football Bowl Subdivision, of which it has been a member since 2001. The head football coach is Chip Lindsey. The football program joined the Sun Belt Conference in 2004.

The Eastern Ranges is an Australian rules football team in the NAB League, the Victorian statewide under-18s competition. 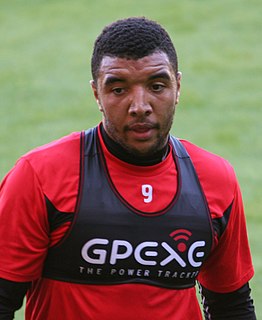 Troy Matthew Deeney is an English professional footballer who plays as a striker for and is captain of Premier League club Watford.

Troy Clarke is an Australian former rugby league footballer who played in the 1980s and 1990s. He played for the Newcastle Knights from 1988 to 1989 and the Canterbury Bulldogs in 1992. Clarke then moved to England and played 2 seasons for Leigh.

Troy Clarke was an Australian rules footballer who played with the Brisbane Bears in the Australian Football League (AFL) during the 1990s. He is a member of the Queensland Football Hall of Fame.

Merrimac State High School is a public high school in Mermaid Waters, Queensland which opened in 1979.

Clarke is an Anglo-Irish surname which means "clerk". The surname is of English and Irish origin but the original word comes from Latin for clericus. There are some surname variants, including the Clerk and Clark which predates Clarke by over 700 years. Clarke is also uncommonly chosen as a given name.

The 2016 USC Trojans football team represented the University of Southern California in the 2016 NCAA Division I FBS football season. They played their home games at the Los Angeles Memorial Coliseum as part of the South Division of the Pac-12 Conference. They were led by head coach Clay Helton in his first full season after replacing Steve Sarkisian in the sixth game of the 2015 season. They finished the season 10–3, 7–2 in Pac-12 play to finish in second place in the South Division. They were invited to the Rose Bowl where they defeated Big 10 conference champion Penn State.

The 2017 USC Trojans football team represented the University of Southern California in the 2017 NCAA Division I FBS football season. They played their home games at the Los Angeles Memorial Coliseum as members of the South Division of the Pac-12 Conference. They were led by second-year head coach Clay Helton. They finished the season 11–3, 8–1 in Pac-12 play to be champions of the South Division. They represented the South Division in the Pac-12 Championship Game where they defeated Stanford to become Pac-12 Champions. They were invited to play in the Cotton Bowl where they were soundly defeated at the hands of Ohio State, 24–7.