Troyitsky Shopping Mall was a shopping mall in the Ukrainian capital city Kiev in front of the Olimpiysky National Sports Complex. In 2008 it was demolished and on its place was created Trinity Square (Troyitska Ploshcha).

The mall's construction has been halted because of concerns that the adjacent stadium would not have enough free space to accommodate the large number of tourists coming to matches of the UEFA Euro 2012 championship. The Union of European Football Associations has banned games at the stadium until their concerns with the Olympic Plaza are addressed. [1]

The Atatürk Olympic Stadium located in İkitelli, a district in the western outskirts of Istanbul, is the largest-capacity stadium of Turkey. The stadium is named after Mustafa Kemal Atatürk, the founder and first President of the Republic of Turkey. Its construction began in 1999 and was completed in 2002. It was built for Turkey's failed bid for the 2008 Olympic Games that were ultimately awarded to Beijing. It cost about US$140 million.

The Olympic National Sports Complex is a multi-use sports and recreation facility in Kiev, Ukraine, located on the slopes of the city's central Cherepanova Hora, Pecherskyi District. The Olympic National Sports Complex Stadium, the home of FC Dynamo Kyiv, is the premier sports venue in Ukraine and the second largest in Eastern Europe after Moscow's Luzhniki Stadium. The complex beside its stadium also features several other sports facilities and is designed to host the Olympic Games. 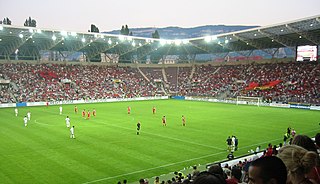 Stade de Genève, also called Stade de la Praille, is a stadium in Geneva. It has a capacity of 30,084.

Donbass Arena or Donbas Arena is a stadium with a natural grass pitch in Donetsk, Ukraine that opened on 29 August 2009. The facility is located in the center of the city, in the Lenin Comsomol park. With a capacity of 52,518 spectators, the stadium used to host FC Shakhtar Donetsk matches and also hosted some matches of Euro 2012. The final cost of construction for Donbass Arena was $400M. The stadium has been unused and closed to the public since May 2014, due to the War in Donbass.

Western Crossing, formerly known as Western Plaza, is a shopping mall in Amarillo, Texas, United States. It opened in 1968 with a construction cost of approximately US$13 million. Western Plaza was once a main shopping point in Amarillo, but from the 1980s to 2000s has suffered stores leaving its complex. It is demolished and a new shopping center is being built. The Western Crossings shopping center is estimated to cost US$40 million.

Standings and results for Group B of the UEFA Euro 2008 qualifying tournament.

Early mayoral and city council elections (Ukrainian: Дотермінові вибори до київської міської ради were contested in the Ukrainian capital Kiev on May 25, 2008. The snap election was called by the Ukrainian parliament, the Verkhovna Rada by a 246-5 vote on March 18 amid corruption allegations involving the incumbent Mayor Leonid Chernovetskyi. The local election determined the new Mayor of Kiev, as well as the composition of the 120-seat Kiev City Council.

The Dongdaemun Design Plaza, also called the DDP, is a major urban development landmark in Seoul, South Korea designed by Zaha Hadid and Samoo, with a distinctively neofuturistic design characterized by the "powerful, curving forms of elongated structures". The landmark is the centerpiece of South Korea's fashion hub and popular tourist destination, Dongdaemun, featuring a walkable park on its roofs, large global exhibition spaces, futuristic retail stores and restored parts of the Seoul fortress.

Arena Națională is a retractable roof football stadium in Bucharest, Romania, which opened in 2011, on the site of the original Stadionul Național, which was demolished from 2007 to 2008. The stadium hosts major football matches including home matches of the Romania national football team, and the Cupa României Final. The stadium is also the home of Liga I football clubs FCSB and Dinamo București.

Standings and results for Group 6 of the UEFA Euro 2004 qualifying tournament.

Standings and results for Group 4 of the UEFA Euro 2000 qualifying tournament. 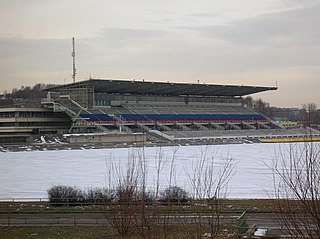 The bidding process for UEFA Euro 2012 ended on 18 April 2007, when a joint bid from Poland and Ukraine was selected as the host. 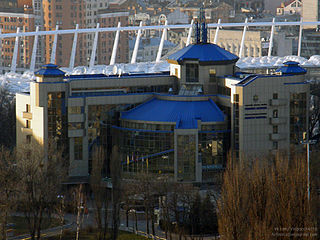 House of Football is a headquarters of the Football Federation of Ukraine located in Kiev, Ukraine, right next to the Olympiyskiy National Sports Complex.

The 2018 UEFA Champions League Final was the final match of the 2017–18 UEFA Champions League, the 63rd season of Europe's premier club football tournament organised by UEFA, and the 26th season since it was renamed from the European Cup to the UEFA Champions League. It was played at the NSC Olimpiyskiy Stadium in Kiev, Ukraine on 26 May 2018, between Spanish side and defending champions Real Madrid, who had won the competition in each of the last two seasons, and English side Liverpool.

Group B of UEFA Euro 2020 qualifying was one of the ten groups to decide which teams would qualify for the UEFA Euro 2020 finals tournament. Group B consisted of five teams: Lithuania, Luxembourg, Portugal, Serbia and Ukraine, where they played against each other home-and-away in a round-robin format.