Trpejca (Macedonian : Трпејца [tr̩ˈpɛjt͡sa] ) is a village at the foot of the Galičica Mountain and along the shore of the Lake Ohrid in North Macedonia. Traditionally a fishing village, it has recently become an upscale vacation spot relying heavily on the tourism during the summer months. Trpejca is home to around 303 inhabitants [1] and has just one school, two shops, and a church recently built on the exact location of an older one. It is known as the Macedonian Saint-Tropez among locals due to its recent tourist influx.

Local stories tell a tale of the village being named after a woman who was the wife of a man called Trpe, in turn they called her Trpejca. Locals will date the village at various years of age but the common theory is that it began to be settled in the late 16th century. During this time it was involved in and relied heavily on fishing and trading its resources with Ohrid and surrounding Villages.

In modern times it has become largely a tourist destination during the summer months with the locals relying less on fishing and more on tourism and hospitality. With the forces of urbanisation at work the younger generation tend to reside in the cities of North Macedonia, mainly Ohrid and Skopje. This has led the population of Trpejca to stagnate and has kept it fairly low. Those who do remain continue to live mostly off the land with each family still relying heavily on farming their own food and livestock. In the summer most tend to open their doors as bed and breakfasts for the large number of incoming tourists.

Trpejca's residents rely quite heavily on the tourism boom in the summer without which there would be a severe lack of activity in the village. The last decade has seen a number of developments in the village hoping to cash in on the summer business. Many houses were built illegally without approval by the government during the boom period of tourism, and because of this had to be knocked down. Remnants of this are still visible today as many of the demolished houses including some of which are along the shoreline have not been cleaned up and the rubble remains. Most of the tourists entering the village are from North Macedonia itself more specifically from the capital, Skopje. Others include Greeks, Albanians and ex pats coming back to North Macedonia for holiday from places such as Australia, Canada or the US.

Trpejca has a rich culture and is almost exclusively Macedonian Orthodox. At the beginning of each summer the village celebrates by hosting the Sunset Festival which includes music, food and dancing. The local Church has been rebuilt in recent years with the new church on the exact site of the Old one. There is also a cemetery directly opposite the church. some of the local cuisine includes Gjomlek, Local Pastramka (trout), Belvica and Fish Stew. Tourists and locals alike also engage in a wide range of activities such as Snorkelling, swimming, sunbathing, hiking, boating and fishing. The Village has deep ties to the Mountain of Galičica which stands directly over it. Locals are allowed free entry into the Galičica National Park due to this. Locals also have a small monastery called 'Zaum' in which is only accessible via boat. they celebrate the day of Zaum in July with a feast held at the Monastery which is about an 8-minute boat ride south. Due to its proximity to Sveti Naum, Locals also have strong ties with the day of the Saint Naum in early July. 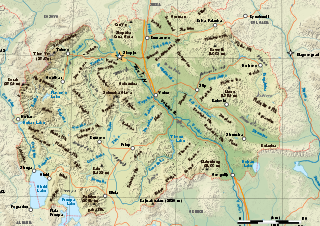 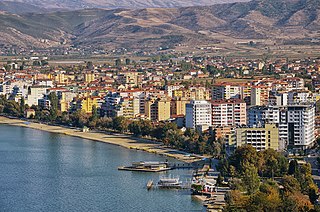 Pogradec is the eleventh most populous city of the Republic of Albania and the capital of the eponymous municipality. It is located on a narrow plain between two mountain chains along the southwestern banks of the Lake of Ohrid. Its climate is profoundly influenced by a seasonal Mediterranean and Continental climate. 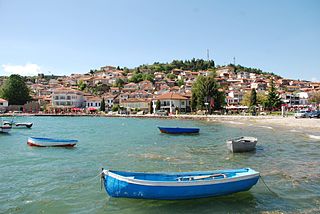 Struga is a town and popular tourist destination situated in the south-western region of North Macedonia, lying on the shore of Lake Ohrid. The town of Struga is the seat of Struga Municipality. 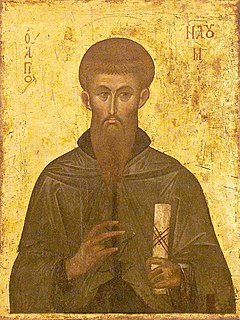 Saint Naum, also known as Naum of Ohrid or Naum of Preslav was a medieval Bulgarian writer, enlightener, one of the Seven Apostles of the First Bulgarian Empire and missionary among the Slavs. He was among the disciples of Saints Cyril and Methodius and is associated with the creation of the Glagolitic and Cyrillic script. Naum was among the founders of the Pliska Literary School. Afterwards Naum worked at the Ohrid Literary School. He was among the first saints declared by the Bulgarian Orthodox Church after its foundation in the 9th century. The mission of Saint Naum played significant role by transformation of the local Slavs into Bulgarians.

Mali i Thatë is a mountain in southeast Albania; with a part of it being in the southwest of North Macedonia with the highest altitude of 2287 meters.

Lake Ohrid is a lake which straddles the mountainous border between the southwestern part of North Macedonia and eastern Albania. It is one of Europe's deepest and oldest lakes, with a unique aquatic ecosystem of worldwide importance, with more than 200 endemic species.

The Lake Prespa is located on the tripoint of North Macedonia, Albania, and Greece. It is a system of two lakes separated by an isthmus: the Great Prespa Lake, divided between the three countries, and the Little Prespa Lake, mostly within Greece. They are the highest tectonic lakes in the Balkans, standing at an elevation of 853 metres (2,799 ft).

Peštani is a village in the municipality of Ohrid, North Macedonia, located 12 kilometres south of the city of Ohrid. It is a popular beachside town along Lake Ohrid and lies at the foot of Galičica National Park. Originally a fishing village, it now gets most of its income from tourism.

Elšani is a village in the municipality of Ohrid, North Macedonia. It is situated 10 kilometres (6.2 mi) south of the City of Ohrid. It is spread across the western slopes of Galičica Mountain, near Lake Ohrid. The village is located at 850 metres (2,790 ft) above sea level.

The Monastery of Saint Naum is an Eastern Orthodox monastery in North Macedonia, named after the medieval Saint Naum who founded it. It is situated along Lake Ohrid, 29 kilometres (18 mi) south of the city of Ohrid.

Galičica is a mountain situated across the border between North Macedonia and Albania. There is a national park on North Macedonia's side of the mountain, situated between the two biggest lakes in the republic: Lake Ohrid and Lake Prespa. It stretches over an area of 227 square kilometres (88 sq mi). 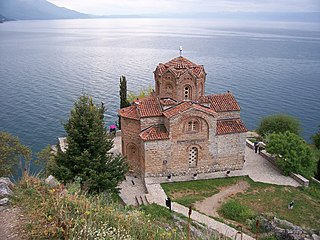 Macedonia Timeless is a series of promotional tourist videos about the Republic of North Macedonia. The videos showcase scenery from the Balkan country and its culture to a foreign audience. Each video of the project is the work of a private production company, carried out on behalf of the government of North Macedonia, which officially funds the effort. The purpose of the project as it is defined is "to promote awareness of Macedonian tourism opportunities".

North Macedonia, officially the Republic of North Macedonia, is a country in Southeast Europe. It gained independence in 1991 as one of the successor states of Yugoslavia. North Macedonia is a landlocked country bordering with Kosovo to the northwest, Serbia to the north, Bulgaria to the east, Greece to the south, and Albania to the west. It constitutes approximately the northern third of the larger geographical region of Macedonia. Skopje, the capital and largest city, is home to a quarter of the country's 1.83 million population. The majority of the residents are ethnic Macedonians, a South Slavic people. Albanians form a significant minority at around 25%, followed by Turks, Romani, Serbs, Bosniaks, Aromanians and a few other minorities.

Ljubaništa is a village along the shore of the Lake Ohrid in North Macedonia. The village is located near the Monastery of St. Naum and the border with Albania.

Velestovo is a village situated on the slopes of Galičica Mountain in Ohrid Municipality, North Macedonia. Located roughly 4 kilometres from the town of Ohrid, there are only 53 residents of Velestovo, most of whom are retired.

Lagadin is a small tourist village in the municipality of Ohrid, North Macedonia, located 9 kilometres south of the city of Ohrid. It is a popular beachside destination along Lake Ohrid and lies at the foot of Galičica National Park.