Trstenik (Serbian Cyrillic : Трстеник, pronounced  [tr̩stěniːk] ) is a town and municipality located in the Rasina District of central Serbia. As of 2011 census, the town has 15,329, while the municipality has 42,989 inhabitants. It lies on the West Morava river.

In the Early and Middle Iron Age, the tribe of Triballi inhabited the West Morava. Romans conquered the area in the 1st century AD. Roman sites include the Stražbe castrum on the right bank of the river, as well as sites in Bučje and Donji Dubić, and others still unexplored. The Romans introduced the Vitis vinifera (Common Grape Vine) to the region, which still today is processed in Serbian wineyards (It is one of the main incomes in the municipality).

In the Middle Ages, Trstenik belonged to the West Morava oblast (province). The first written record of Trstenik is from Prince Lazar's Ravanica charter dated 1381, in which he donated Trstenik to the Ravanica monastery. The Ljubostinja monastery was built in the Morava architectural style.

In 1427, the Ottoman Empire conquered the areas of Kruševac and Trstenik. In the Western Morava valley, the Ottomans built the Grabovac fortress. After the final fall of the Serbian Despotate in 1459, Trstenik became an important Ottoman caravan stop. In an Austrian report dated 1784, Trstenik had 47 Muslim and 17 Christian houses, stone mosques, two inns and a few craft shops. At that time Trstenik was located 2 km west of the present town, near the village of Osaonica.

After receiving autonomy of the Principality of Serbia, Miloš Obrenović ordered the construction of a new settlement on the right bank of the Western Morava in the period 1832-1838. In the 1870s, Trstenik got a primary school, a post office, a pharmacy, a bank and the first steam mill. In 1899, west across the river, a steel bridge was built, and the following year the Church of the Holy Trinity was built. Stalać-Kraljevo railroad opened in 1910.

From 1929 to 1941, Trstenik was part of the Morava Banovina of the Kingdom of Yugoslavia.

After World War II new facilities were built and a large part of the old quarters dates from this period. After World War II, Trstenik suffered significant industrial development with the establishment of the factory hydraulic and pneumatic systems First five years.[ clarification needed ] During the period of sanctions in the 1990s, the city stagnated.

According to the 2011 census results, the municipality of Trstenik has a population of 42,966 inhabitants.

The ethnic composition of the municipality: [5]

As of 2017, key industrial companies in Trstenik are mechanical manufacturer PPT-Petoletka and defense company PPT-Namenska, both being the successors of once-great manufacturing company "Prva Petoletka" which employed nearly 20,000 employees at its peak during the 1980s.[ citation needed ]

The following table gives a preview of total number of registered people employed in legal entities per their core activity (as of 2018): [6] 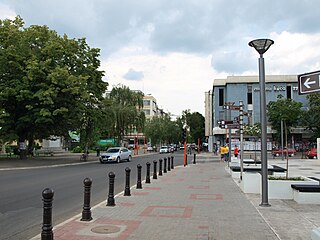 Ćuprija is a town and municipality located in the Pomoravlje District of central Serbia. The population of the town is 19,380, while the municipality has 30,645 inhabitants. 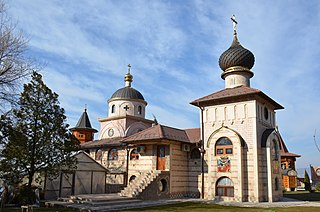 Paraćin is a town and municipality located in the Pomoravlje District of central Serbia. It is located in the valley of the Velika Morava river, north of Kruševac and southeast of Kragujevac. In 2011 the town had a population of 24,573. It also had a civil airport. 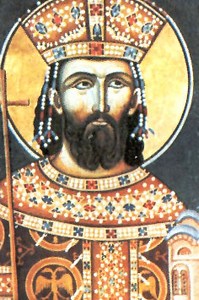 Prince Lazar Hrebeljanović was a medieval Serbian ruler who created the largest and most powerful state on the territory of the disintegrated Serbian Empire. Lazar's state, referred to by historians as Moravian Serbia, comprised the basins of the Great Morava, West Morava, and South Morava rivers. Lazar ruled Moravian Serbia from 1373 until his death in 1389. He sought to resurrect the Serbian Empire and place himself at its helm, claiming to be the direct successor of the Nemanjić dynasty, which went extinct in 1371 after ruling over Serbia for two centuries. Lazar's programme had the full support of the Serbian Orthodox Church, but the Serbian nobility did not recognize him as their supreme ruler. He is often referred to as Tsar Lazar Hrebeljanović ; however, he only held the title of prince. 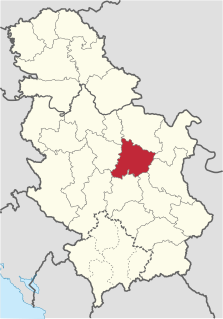 The Pomoravlje District is one of eight administrative districts of Šumadija and Western Serbia. It expands to the central parts of Serbia. According to the 2011 census results, it has a population of 214,536 inhabitants. The administrative center is the city of Jagodina. 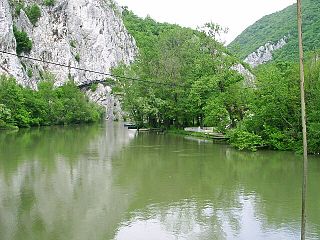 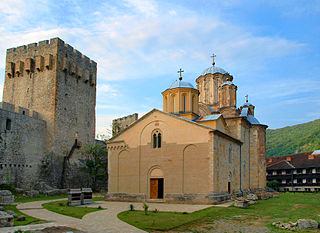 The Manasija Monastery, also known as Resava, is a Serbian Orthodox monastery near Despotovac, Serbia, founded by Despot Stefan Lazarević between 1406 and 1418. The church is dedicated to the Holy Trinity. It is one of the most significant monuments of medieval Serbian culture and it belongs to the "Morava school". The monastery is surrounded by massive walls and towers. Immediately following its foundation, the monastery became the cultural centre of the Serbian Despotate. Its School of Resava was well known for its manuscripts and translations throughout the 15th and 16th centuries, even after the fall of the Despotate to the Ottoman Turks. Manasija complex was declared Monument of Culture of Exceptional Importance in 1979, and it is protected by Republic of Serbia, and monastery have entered a UNESCO Tentative List Process in 2010. 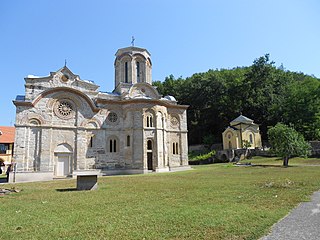 Aleksinac is a town and municipality located in the Nišava District of southern Serbia. According to 2011 census, the town has a population of 17,978 inhabitants, while the municipality has 51,863 inhabitants.

Princess Milica Hrebeljanović née Nemanjić also known as Empress (Tsaritsa) Milica, was a royal consort of Serbia. Her husband was Serbian Prince Lazar and her children included despot Stefan Lazarević, and Jelena Lazarević, whose husband was Đurađ II Balšić. She is the author of "A Mother's Prayer" and a famously moving poem of mourning for her husband, My Widowhood's Bridegroom.

Moravian Serbia or Realm of Prince Lazar is the name used in historiography for the largest and most powerful Serbian principality to emerge from the ruins of the Serbian Empire (1371). Moravian Serbia is named after Morava, the main river of the region. Independent principality in the region of Morava was established in 1371, and attained its largest extent in 1379 through the military and political activities of its first ruler, prince Lazar Hrebeljanović. In 1402 it was raised to the Serbian Despotate, which would exist until 1459.

Morava architectural school, also known as the Morava style, or simply as the Morava school, is an ecclesiastical architectural style that flourished in the Serbian Late Middle Ages, during the reign of the Lazarević and Branković dynasties. The churches and monasteries were built by the rulers Lazar Hrebeljanović (1370–1389), Stefan Lazarević (1402–1427) and Đurađ Branković (1427–1456) and their nobility. The first endowment was the royal tomb of Ravanica. The main achievement of the Morava School is the splendor of the sculptural elements. The decorative stone plastic of the Moravska School represents one of the most original artistic achievements of medieval Serbian art. Decorative elements characteristic of this artistic school typically consist of geometric arabesque with stylized floral ornaments, which include only scarce figurative details. As fragments of the plastic decoration from the almost completely destroyed Church of Saint Steven in village Milentija testify, this sculpture was usually painted, and thus, very vivid in effect.

The Ravanica Monastery is a Serbian Orthodox monastery on Kučaj mountains near Senje, a village in Ćuprija municipality in Central Serbia. It was built in 1375–1377 as an endowment of prince Lazar of Serbia, who is buried there. The Ravanica church is called the birthplace of the new artistic movement "Morava school" because of architectural and artistic features. It is original blend of the Mount Athos and the cross-in-square five-domed model that became standard in the time of King Milutin.

Church of the Holy First Martyr Stephen, better known as the Lazarica Church, is a Serbian Orthodox church in Kruševac, Serbia. It was built in 1375-1378 as an endowment of prince Lazar of Serbia. Lazarica, as an outstanding achievement of the Serbian medieval architecture, was declared a Monument of Culture of Exceptional Importance in 1979, and it is protected by the Republic of Serbia. Lazarica was built as a prototype of the Morava school of architecture, as a palace church associated with the Kruševac Fortress, the capital of Prince Lazar. Today, only Lazarica and parts of the keep remain from the vast fortress complex.

The Nova Pavlica Monastery is a 14th-century Serbian Orthodox monastery located in Pavlica, Raška, in southwestern Serbia. It belongs to the Eparchy of Žiča. The monastery is located near Stara Pavlica, near river Ibar and near old town of Brvenik.

Osredak Special Nature Reserve is a natural monument in central Serbia. It has been declared a special nature reserve in 2020 in order to preserve the wetlands in the West Morava Valley. The wetland is important for the preservation of the water quality of the West Morava and is the only important wetland locality in the radius of 100 km (62 mi).