Trubny is a rural locality in Aktyubinsky Selsoviet of Volodarsky District, Astrakhan Oblast, Russia. The population is 715 as of 2010. 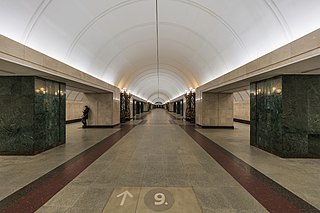 Trubnaya is a Moscow Metro station in the Tverskoy District, Central Administrative Okrug, Moscow. It is on the Lyublinsko-Dmitrovskaya Line, between Dostoyevskaya and Sretensky Bulvar stations.

The Lyublinsko–Dmitrovskaya line is a line of the Moscow Metro. It was known as "Lyublinskaya line" before 2007. First opened in 1995 as a semi-chordial radius it is at present in process of being extended through the centre and northwards. At present the line has 34 kilometres of track and 23 stations.

Tekstilshchiki is a Moscow Metro station in the Tekstilshchiki District, South-Eastern Administrative Okrug, Moscow. It is on Tagansko–Krasnopresnenskaya line, between Volgogradsky Prospekt and Kuzminki stations. Tekstilschiki was opened on 31 December 1966 as a part of the Zhdanovsky radius.

Petrovsky Boulevard,, is a major boulevard in Moscow. It begins at the Petrovsky Gates Square and ends at Trubnaya Square, completing the link of Boulevard Ring between Strastnoy Boulevard and Rozhdestvensky Boulevard.

Rozhdestvensky Boulevard is a major boulevard in Meshchansky District of Moscow, Russia. It begins at Trubnaya Square (west) and ends at Sretenka Gates in the same district (completing the Boulevard Ring link from Petrovsky Boulevard to Sretensky Boulevard.

Nikolay Robertovich Erdman was a Soviet dramatist and screenwriter primarily remembered for his work with Vsevolod Meyerhold in the 1920s. His plays, notably The Suicide (1928), form a link in Russian literary history between the satirical drama of Nikolai Gogol and the post-World War II Theatre of the Absurd.

Sretensky Bulvar is a Moscow Metro station in the Meshchansky District, Central Administrative Okrug, Moscow. It is located on the Lyublinsko-Dmitrovskaya Line, between Trubnaya and Chkalovskaya stations.

Neglinnaya Street is a street inside the Garden Ring of Moscow, Russia. It runs from the Bolshoi Theatre to the Trubnaya Square. The street was paved over the underground Neglinnaya River in 1819. Throughout the 20th century the river regularly flooded the street and the adjacent quarter. The highlights of the Neglinnaya include the Muir & Mirrielees building, the Petrovka Passazh, the Sandunov Baths, and the Central Bank of the Russian Federation.

Boris Vasilyevich Barnet was a Soviet film director, actor and screenwriter of British origin. He directed 27 films between 1927 and 1963.

Tsvetnoy Bulvar is a Moscow Metro station on the Serpukhovsko-Timiryazevskaya Line, in the Tverskoy District of central Moscow. It was opened on 31 December 1988. 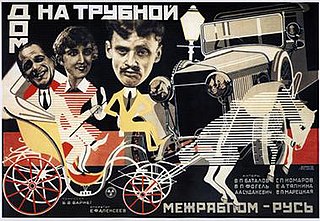 The House on Trubnaya is a 1928 comedy film directed by Boris Barnet and starring Vera Maretskaya.

Dostoevskaya is a Moscow Metro station in the Meshchansky District, Central Administrative Okrug, Moscow. It is on the Lyublinsko-Dmitrovskaya line, between Maryina Roshcha and Trubnaya stations.

The Girl with a Hatbox or Moscow That Laughs and Weeps is a 1927 Soviet silent romantic comedy film directed by Boris Barnet and starring Anna Sten, Vladimir Mikhailov and Vladimir Fogel. The picture was commissioned by the People's Commissariat (Narkomfin) to promote government bonds. It was a success with the audiences and the critics alike.

Vera Petrovna Maretskaya was a Soviet and Russian stage and film actress.

Ada Ignatievna Wójcik was a Soviet actress. In 1935 she received the title RSFSR Honored Artist.