The Truce of Łęczyca was signed during the Polish–Teutonic War (1431–1435) between the Kingdom of Poland and the Teutonic Order in Łęczyca on 15 December 1433 [1] (this has also led some Polish historians to divide this Polish–Teutonic War into two wars, in 1431–1433 and in 1435). [2] The Teutonic Knights, pressured by the citizens of their lands, agreed to the 12-year-old truce [3] [4] to other Polish demands, including that the Order would cease support to Švitrigaila (a Lithuanian noble who attempted to break the Polish-Lithuanian union with the aid of the Order); in addition each side would control the territories it occupied until a peace would be signed (uti possidetis), and no party would seek mediation of foreign powers to change this truce. [5] [6] This marked the end of the war on Polish territories; the struggle on Lithuanian lands would continue for two more years [4] (as the truce with Poland did not extend to the Livonian Order). [5] 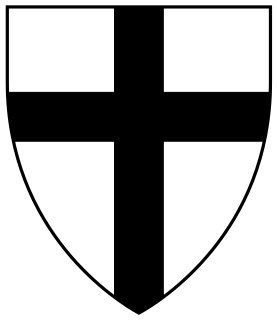 Łęczyca is a town of 14,362 inhabitants in central Poland. Situated in the Łódź Voivodeship, it is the county seat of the Łęczyca County. 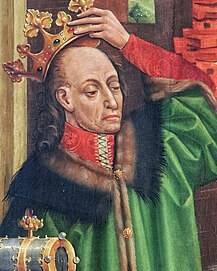 Jogaila, later Władysław II Jagiełło was the Grand Duke of Lithuania (1377–1434) and then the King of Poland (1386–1434), first alongside his wife Jadwiga until 1399, and then sole King of Poland. He ruled in Lithuania from 1377. Born a pagan, in 1386 he converted to Catholicism and was baptized as Władysław in Kraków, married the young Queen Jadwiga, and was crowned King of Poland as Władysław II Jagiełło. In 1387 he converted Lithuania to Christianity. His own reign in Poland started in 1399, upon the death of Queen Jadwiga, and lasted a further thirty-five years and laid the foundation for the centuries-long Polish–Lithuanian union. He was a member of the Jagiellonian dynasty in Poland that bears his name and was previously also known as the Gediminid dynasty in the Grand Duchy of Lithuania. The dynasty ruled both states until 1572, and became one of the most influential dynasties in late medieval and early modern Central and Eastern Europe. During his reign, the Polish-Lithuanian state was the largest state in the Christian world. 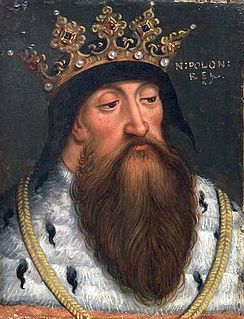 Władysław I the Elbow-high or the Short was the King of Poland from 1320 to 1333, and duke of several of the provinces and principalities in the preceding years. He was a member of the Piast family of rulers, son of Duke Casimir I of Kujawy, and great-grandson of King Casimir II the Just. He inherited a small portion of his father’s lands, but his dominion grew as some of his brothers died young. He tried for rule of the Duchy of Krakow in 1289, after the death of his half-brother Leszek II the Black and the withdrawal from contention of his ally Bolesław II of Masovia, but was unsuccessful. After a period in exile during the rule of Wenceslas II, Władysław rebounded to re-assume some duchies after Wenceslas’ death, and then gained Krakow in 1306 after the murder of Wenceslas III. He temporarily took control of part of Greater Poland after the death of his ally Przemysł II, lost it, and then regained it later on. He conquered Gdansk Pomerania, and left it to familial governors. For defense of this territory he turned to the Teutonic Knights, who then demanded an exorbitant sum or the land itself as an alternative. This led to an extended battle with the Knights, which was not resolved after either a papal trial or Władysław’s own death. Perhaps his greatest achievement was gaining papal permission to be crowned King of Poland in 1320, which occurred for the first time at Wawel Cathedral in Krakow. Władysław died in 1333, and his reign was followed by the rule of his more renowned son, Casimir III the Great. 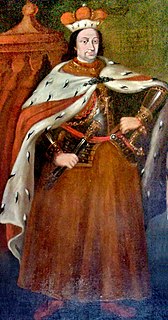 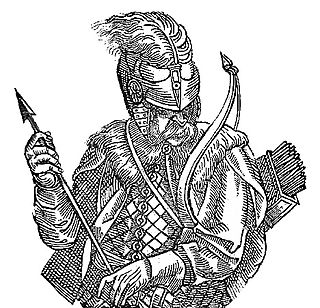 Švitrigaila was the Grand Duke of Lithuania from 1430 to 1432. He spent most of his life in largely unsuccessful dynastic struggles against his cousins Vytautas and Sigismund Kęstutaitis.

The Union of Grodno was a series of acts of the Polish–Lithuanian union between Kingdom of Poland and Grand Duchy of Lithuania. The first acts were signed in 1432 during the Lithuanian Civil War of 1431–1435. The acts confirmed the Union of Vilnius and Radom (1401). The Union established Sigismund Kęstutaitis as the Grand Duke of Lithuania and re-established Władysław II Jagiełło's seniority and dynastic interest in Lithuania.

The Polish–Lithuanian–Teutonic War or Great War occurred between 1409 and 1411, pitting the allied Kingdom of Poland and Grand Duchy of Lithuania against the Teutonic Knights. Inspired by the local Samogitian uprising, the war began by Teutonic invasion of Poland in August 1409. As neither side was ready for a full-scale war, Wenceslaus IV of Bohemia brokered a nine-month truce. After the truce expired in June 1410, the military-religious monks were decisively defeated in the Battle of Grunwald (Tannenberg), one of the largest battles in medieval Europe. Most of the Teutonic leadership was killed or taken prisoner. While defeated, the Teutonic Knights withstood the siege on their capital in Marienburg (Malbork) and suffered only minimal territorial losses in the Peace of Thorn (1411). Territorial disputes lasted until the Peace of Melno of 1422. However, the Knights never recovered their former power and the financial burden of war reparations caused internal conflicts and economic decline in their lands. The war shifted the balance of power in Central Europe and marked the rise of the Polish–Lithuanian union as the dominant power in the region.

The Gollub War was a two-month war of the Teutonic Knights against the Kingdom of Poland and the Grand Duchy of Lithuania in 1422. It ended with the signing the Treaty of Melno, which resolved territorial disputes between the Knights and Lithuania over Samogitia that had dragged on since 1398.

The Polish–Teutonic War of 1519–1521 was fought between the Kingdom of Poland and the Teutonic Knights, ending with an armistice in April 1521. Four years later, under the Treaty of Kraków, part of the Catholic Monastic state of the Teutonic Knights became secularized as the Duchy of Prussia. The reigning Grand Master Albert of Hohenzollern-Brandenburg-Ansbach became the first Duke of Prussia by paying the Prussian Homage as vassal to his uncle, Polish king Sigismund I the Old. 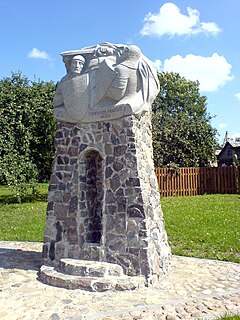 The Lithuanian Civil War of 1432–1438 was a conflict over the succession to the throne of the Grand Duchy of Lithuania, after Vytautas the Great died in 1430 without leaving an heir. The war was fought on the one side by Švitrigaila, allied with the Teutonic Knights, and on the other by Sigismund Kęstutaitis, backed by the Kingdom of Poland. The war threatened to sever the Union of Krewo, the personal union between Poland and Lithuania. Švitrigaila's alliance with the Grand Master of the Teutonic Order, Paul von Rusdorf, launched the Polish–Teutonic War (1431–1435) but failed to secure victory for Švitrigaila.

Prince Feodor Ostrogski (1360–1446) was a powerful magnate in Volhynia of Rurikid stock, son of Daniil Ostrogski. In some sources he's called Teodor, Fedko or Frederic. He was active in the Hussite Wars and assisted Sigismund Korybut.

Peace of Brześć Kujawski was a peace treaty signed on December 31, 1435 in Brześć Kujawski that ended the Polish–Teutonic War (1431–1435). The treaty was signed in the aftermath of the Livonian Order's defeat at the hands of the allied Polish-Lithuanian force in the Battle of Pabaiskas (Wiłkomierz). The Teutonic Knights agreed to cease their support to Švitrigaila and in the future to support only Grand Dukes properly elected jointly by Poland and Lithuania. The treaty did not change borders determined by the Treaty of Melno in 1422. The Peace of Brześć Kujawski showed that Teutonic Knights lost their universal missionary status. Teutonic and Livonian Order no longer interfered with Polish–Lithuanian affairs; instead Poland and Lithuania involved themselves in the Thirteen Years' War, the civil war in Prussia that tore it in half.

The rule of the Jagiellonian dynasty in Poland between 1386 and 1572 spans the late Middle Ages and early Modern Era in European history. The dynasty was founded by the Lithuanian Grand Duke Jogaila, whose marriage to Queen Jadwiga of Poland formed a Polish–Lithuanian union. The partnership brought vast territories controlled by the Grand Duchy of Lithuania into Poland's sphere of influence and proved beneficial for both the Polish and Lithuanian people, who coexisted and cooperated in one of the largest political entities in Europe for the next four centuries.

The Treaty of Christmemel was a treaty signed on 19 June 1431 between Paul von Rusdorf, Grand Master the Teutonic Knights, and Švitrigaila, Grand Duke of Lithuania. Švitrigaila was preparing for a war with Poland to defend his claim to the Lithuanian throne and sought allies. The treaty established an anti-Polish alliance and prompted the Knights to invade the Kingdom of Poland, starting the Polish–Teutonic War (1431–35). Lithuania also surrendered Palanga and three miles of the coastline on the Baltic Sea, thus modifying the Treaty of Melno of 1422.

Dobiesław Oleśnicki was a soldier, aristocrat and politician in 15th century Poland.