Trude Möhwaldová (born 25 March 1915, date of death unknown) was a Czech alpine skier. She competed in the women's combined event at the 1936 Winter Olympics. [1]

Trude Gundersen is a retired Norwegian taekwondo athlete. She was Norway's first and only taekwondo competitor during the 2000 Summer Olympics in Sydney, and won a silver medal in the -67 kg weight class. 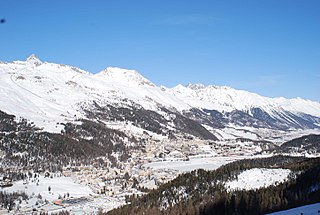 Trude Beiser is a former alpine ski racer from Austria. Born in Lech am Arlberg in Vorarlberg, she won two Olympic gold medals and a world championship.

Trude Dybendahl, sometimes listed as Trude Dybendahl-Hartz or Trude Dybendahl Hartz, is a former Norwegian cross-country skier who competed from 1986 to 1998. She won three silver medals in the 4 × 5 km relay at the Winter Olympics. Her best individual Olympic finish was fourth in the 30 km event in 1994.

Lee Sun-hee is a female South Korean taekwondo practitioner and Olympic champion. She competed at the 2000 Summer Olympics in Sydney, where she won the gold medal in the 67 kg competition. She won 6–3 in the final against Trude Gundersen of Norway.

The women's downhill event was part of the alpine skiing at the 1952 Winter Olympics program, and was the second appearance of the event. The competition was held at Norefjell Ski Resort near Krødsherad, Norway, on Sunday, 17 February. Forty-two alpine skiers from 13 nations competed.

Trude Klecker is an Austrian alpine skier and world champion. She is from Semmering and later lived in Trieste in Italy. Klecker received a gold medal at the 1954 World Championships in Åre, winning the slalom event, and a silver medal in the downhill.

Miroslava "Mirka" Topinková Knapková is a Czech rower who competed in single scull.

Trude Charlotte Gimle is a Norwegian alpine skier. She was born in Aurskog. She competed at the 1994 and 1998 Winter Olympics.

Přemysl Krbec was a Czech gymnast. He was born in Litovel, Bohemia and Moravia, Germany, and competed for Czechoslovakia in the 1964 Summer Olympics. His strongest event was the vault and he was the world champion in 1962 and European champion in 1963 in the discipline. 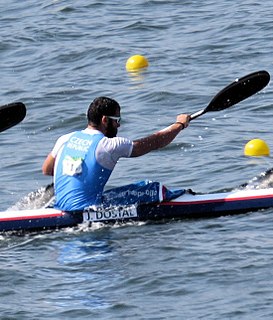 Josef Dostál is a Czech sprint canoeist. He won a bronze medal at the 2012 Summer Olympics in the K-4 1000 m event.

Gertrude Gollner-Kolar was an Austrian artistic gymnast. She competed at the 1948 and 1952 Summer Olympics. At the 1950 Artistic Gymnastics World Championships, she won an uneven bars gold medal along with Ann-Sofi Pettersson of Sweden; Kolar also won the silver medal on vault and the bronze medal in the individual all-around.

Martin Fuksa is a Czech sprint canoeist. He competed in the men's C-1 200 metres event at the 2016 Summer Olympics.

Trude Wollschläger was a German swimmer. She competed in the women's 200 metre breaststroke at the 1936 Summer Olympics.

Josef Bouška is a Czech footballer. He competed in the men's tournament at the 1968 Summer Olympics.