Trude Richter (born Erna Barnick in Magdeburg 19 November 1899 – died Leipzig 4 January 1989 [1] ) was a writer, literary scholar and teacher who became a political activist. [2] She spent many years detained in labour camps in the Soviet Union, but she remained a committed Communist throughout her life. [3]

She received the name by which she is known, Trude Richter, neither by birth or marriage. The name Trude Richter was conferred on her, originally as a cover name, in January 1931 when she joined the Association of Proletarian-Revolutionary Authors ("Bund Proletarisch-Revolutionärer Schriftsteller"), an organisation with close connections to the German Communist Party, of which Richter was also a member. [2]

Erna Barnick was born at the tail end of the nineteenth century in Magdeburg, then in northern central Germany. Her father was a senior official locally with the postal service. She attended an academically focused school in Danzig and then trained to become a teacher, taking a teaching job in 1919 on the island of Poel, a short distance along the coast to the east of Hamburg. Between 1920 and 1924 she undertook a university course at Berlin and, from 1923, Frankfurt am Main, studying philosophy, history, theology [4] and a wide ranging German studies course that included history of art. [3] She received her doctorate in 1924, and in the same year took a post as a school teacher. She undertook further teacher training during 1924–1926 emerging with a full qualification for teaching German Studies and History at academic secondary level. [2] She also became involved in a Communist student group in connection with which she undertook several trips abroad.

From 1926/27 Barnick lived in partnership with the writer and Marxist economist/sociologist academic Hans Günther (1899–1938). In 1930 [3] or 1931 [2] [4] she joined the Communist Party, and in 1931 she relocated from the north to Berlin. In January 1931 she joined the Association of Proletarian-Revolutionary Authors, becoming the association's First Secretary in 1932 on the recommendation of Johannes R. Becher who had been a co-founder of it. At the same time, Trude Richter, as she later became known, continued with her teaching career, now in Berlin-Wilmersdorf. [2] She began to use the name "Trude Richter" for her contributions to the Frankfurt "Workers' Newspaper" ("Arbeiterzeitung") in order to be able to continue with her teaching work, in respect of which she was a state employee.

In January 1933 the NSDAP (Nazi party) took power and lost little time in establishing a one-party state in Germany. Membership of political parties (other than of the Nazi party) was banned which meant that political activities undertaken on behalf of the Communist Party became illegal. Richter nevertheless continued her political resistance work under the new regime. She helped to hide people whom state agencies wished to persecute, undertook courier work between Berlin and Prague and contributed material for illegal publications until April 1934, when she emigrated, initially to Prague and from there to the Soviet Union. [3] Her partner, Hans Günther, was by now already there and was working at the Communist Academy and as a writer. In Moscow Trude Richter was able to complete her post-doctoral dissertation and taught at the Moscow Pedagogical for modern languages. During the next couple of years she pursued her teaching career and produced at least one text-book for language teaching. On 3 November 1936 she took Soviet citizenship; the next day, on 4 November 1936, Richter and her partner Hans Günther were both arrested and placed in pretrial detention. No trial took place but at the end of 1937 she was nevertheless sentenced to five years of detention in one of the Gulag Labor camps and a lifetime ban. [5] In fact, she had been expelled from the Communist Party in January 1937, a couple of months after her initial detention. [2] Grounds for her sentencing were recorded as [alleged] Counter-revolutionary and Trotskyite activities. [3] On 17 August 1938, she was transferred to the Kolyma concentration camp region in the eastern interior of the Soviet Union, first in the North East "Ispravitel'no-trudovoj" Rehabilitation Camp [6] and then in the "Teka" "Ispravitel'no-trudovoj" Dalstroy Rehabilitation Camp. [7] Richter's partner, Hans Günther, also found himself taken to the Kolyma region, but died from Typhus on 10 November 1938 in a transit camp at Vladivostok. [8]

Trude Richter was released from her detention on 14 September 1946 [5] but she would remain in the eastern part of the Soviet Union till 1953. Between 1946 and 1949 she was employed as a cloakroom attendant at the Gorki Theatre in Magadan [2] where she was also able to help out with the stage sets and in the orchestra.

On 23 August 1949 she was rearrested, her party membership ban was again invoked, and she was deported to Ust-Omchug which was the Gulag administrative centre for the Tenka rehabilitation camps. Here she was assigned to the mining administration division. It was around this time that Trude Richter attempted to hang herself but the suicide attempt failed because the rope snapped. [5] Between 1950 and 1953 she was given work playing the piano in the culture club and taught foreign languages as part of an adult education programme. In 1953 she was released from Ust-Omchug. She was able to move back to Magadan where she returned to work at the theatre. Her formal political rehabilitation by the Soviet Supreme Court was completed in 1956/57 after the well-regarded German writers Anna Seghers and Johannes Becher had intervened on her behalf. It was also with the help of Ann Seghers that she was permitted to leave Magadan and, after an absence of more than twenty years, return to what had been central Germany and had by now become the German Democratic Republic where she started a new life in the south of the new country, in Leipzig.

Between 1957 and 1966 she taught at the city's Johannes R. Becher Institute for Literature (as it was known at that time). Here she would later be remembered as a mentor for a younger generation of writers including Hans Weber (1937–1987) and Horst Salomon (1929–1972). She published contributions to the socialist literary canon on her own and had already begun, in the 1960s, to write down her experiences in the Soviet prison camps. In 1972 she published the first volume of her memoirs under the title "The Badge" ("Die Plakette"). However, publication of her complete memoirs, including her periods in detention, was not initially permitted in East Germany. Her full autobiography appeared posthumously under the title "Said to be dead" ("Totgesagt") in 1990. [5]

In 1987 Trude Richter became a member of the East German Writers' Association. 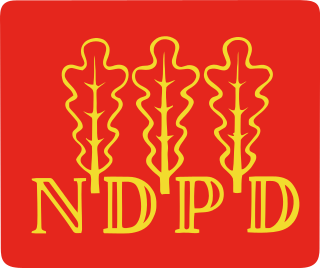 Hans-Wedigo Robert Coppi was a German resistance fighter against the Nazis. He was a member of the anti-fascist resistance group that was later called the Red Orchestra by the Gestapo.

The Hitler Youth conspiracy was a case investigated by the Soviet secret police, during the Great Purge in the late 1930s. It resulted in the arrest of numerous adolescent Germans, some in their twenties and beyond. They were accused of having been fascist, anti-communist members of the Hitler Youth, working against the Soviet Union. Teenagers from the Karl Liebknecht School, from Children's Home No. 6, and adults from factories and elsewhere were arrested, tortured and imprisoned. Many were executed or died in custody. Some were the children of leading communists. Within years, the investigation was found to have been faulty and a number of the investigators were also arrested, with sentences ranging from imprisonment to execution. In the 1950s, following the death of Joseph Stalin, a new examination of the files revealed many of the accusations to have been baseless and a number of the victims were rehabilitated.

Helmut Damerius was a German communist, theatre director, writer and the founding member of the Left Column, an agitprop theater group. As the Nazi Party gained in strength, he went into exile in Moscow, only to be arrested in the so-called Hitler Youth Conspiracy and sentenced to a long term in a Soviet prison. After his prison sentence, he was banished to Kazakhstan and was not permitted to move elsewhere. In 1956, he received permission to move to East Germany, where he stayed until his death.

Carola Stern was the name under which Erika Assmus reinvented herself as a serious journalist and (subsequently) author and politically committed television presenter, after she was obliged to relocate at short notice from East Germany to West Germany in 1951.

The Woman with That Certain Something is a 1925 German silent film directed by Erich Schönfelder and starring Rudolf Lettinger, Lee Parry and Bruno Kastner.

Luise Kraushaar was a German political activist who became a Resistance campaigner against National Socialism and who also, after she left Germany, worked in the French Resistance. She later became a historian, employed at Berlin's Marxism–Leninism Institute in the German Democratic Republic.

Gertrud Classen was a German resistance activist during the Nazi years.

Käthe Latzke was a German political activist (KPD) who resisted Nazism and spent most of her final twelve years in state detention. Her health having been broken, she died in Ravensbrück concentration camp.

Cäcilie "Cilly" Schäfer was a German politician. During the twelve Nazi years her political activities became illegal and she spent much of the time in state detention, which she survived.

Paula Rueß was a German political activist (KPD). Forced into exile by the Nazi takeover, during the early 1940s she worked with the French Resistance.

Friedel Apelt was a German political activist, trades union official and politician (KPD/SED). During the Nazi years she participated actively in anti-fascist resistance, and spent much of the time in prison or as a concentration camp internee. After the war she was able to resume her political career in the Soviet occupation zone.

Erna Lang was a German activist participant in the November Revolution and politician.

Erna Dorn was a victim of the politicised justice system in the German Democratic Republic. She is believed to be the only female to have been sentenced and executed in the aftermath of the East German uprising of 1953.

Käthe Popall was a Bremen politician (KPD). She was the first female member of the Bremen senate.

Luise Dornemann was a women's rights activist-politician and, in her later years, author. 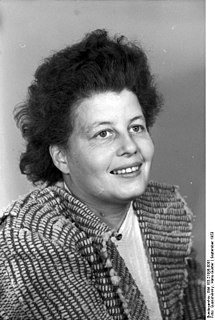 Ilse Rodenberg was a Hamburg typist who became an actress and, later, an influential East German theatre director. She combined this with a political career, sitting as a member of the East German parliament ("Volkskammer") for four decades between 1950 and 1990. She was a member not of the ruling SED (party) but of the National Democratic Party of Germany , one of the smaller Block Parties which contributed a semblance of pluralism to the country's political structure.

Grete Wilde was a German Communist activist who moved to Moscow in the 1930s and fell victim to Stalin's purges. She was sentenced to eight years in labour camp detention in 1937 and deported to Karaganda, where she is believed to have died during 1943/44.

Gertrud Lutz was a German resistance activist. She died by shooting at the Dachau concentration camp.