Trudie Lamb-Richmond is an educator and author belonging to the Schaghticoke Tribal Nation. She has been involved in Native American educational and political issues for over forty years.

A graduate of Long Island University with a master's degree in Anthropology from the University of Connecticut and a master’s in Education from the Bank Street College of Education, Richmond is a Native storyteller who frequently gives seminars in Ledyard, Connecticut, and elsewhere in New England. [1] She served as Director of Public Programs for the Mashantucket Pequot Museum & Research Center, on the Mashantucket Pequot Reservation, and was the Director of Education for the Public Programs for the Institute for American Indian Studies in Washington, Connecticut from 1988 to 1993 and its assistant director from 1993 to 1996. [2] In 1974, she co-founded American Indians for Development (A.I.D.), serving as its Assistant Director until 1986. [2] In 1987 the Governor of Connecticut (William O'Neill), appointed Richmond to a task force on Native American issues. Richmond was also a member of the Connecticut Indian Affairs Council (C.I.A.C.) from 1974 to 1985, and served on the Native American Heritage Committee as a legislative appointee. [2]

Trudie Lamb Richmond was born and raised on the Schaghticoke reservation in northwestern Connecticut. Her storytelling and teachings are shared among other tribal members in southern New England. [3]

In 2010, Richmond retired as the Director of Public Programs at the Mashantucket Pequot Museum and Research Center after fifteen years. [3] Trudie passed away peacefully on April 26, 2021 in the home of her daughter Erin Lamb-Meeches surrounded by love and family. She was 89 years old.

Additionally, Richmond has consulted and collaborated with a number of scholars, including Lucianne Lavin, [5] Amy Den Ouden, [6] and Russell Handsman [7] She has also published many essays of her own, relating to her tribal heritage.

The Pequot are a Native American people of Connecticut. The modern Pequot are members of the federally recognized Mashantucket Pequot Tribe, four other state-recognized groups in Connecticut including the Eastern Pequot Tribal Nation, or the Brothertown Indians of Wisconsin. They historically spoke Pequot, a dialect of the Mohegan-Pequot language, which became extinct by the early 20th century. Some tribal members are undertaking revival efforts. 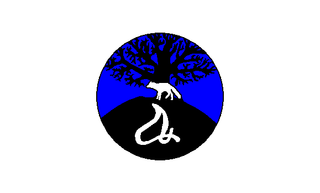 The Mashantucket Pequot Tribal Nation is a federally recognized American Indian tribe in the state of Connecticut. They are descended from the Pequot people, an Algonquian-language tribe that dominated the southern New England coastal areas, and they own and operate Foxwoods Resort Casino within their reservation in Ledyard, Connecticut. As of 2018, Foxwoods Resort Casino is one of the largest casinos in the world in terms of square footage, casino floor size, and number of slot machines, and it was one of the most economically successful in the United States until 2007, but it became deeply in debt by 2012 due to its expansion and changing conditions. 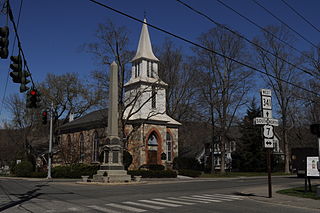 Kent is a town in Litchfield County, Connecticut, alongside the border with New York. The population was 3,019 according to the 2020 census. The town is home to three boarding schools: Kent School, the Marvelwood School, and South Kent School. The Schaghticoke Indian Reservation is also located within town borders. The town is also home to former U.S. Secretary of State Henry Kissinger.

The Golden Hill Paugussett is a state-recognized Native American tribe in Connecticut. Granted reservations in a number of towns in the 17th century, their land base was whittled away until they were forced to reacquire a small amount of territory in the 19th century. Today they retain a state-recognized reservation in the town of Trumbull, and have an additional reservation acquired in 1978 and 1980 in Colchester, Connecticut.

The Schaghticoke are a Native American tribe of the Eastern Woodlands who historically consisted of Mahican, Potatuck, Weantinock, Tunxis, Podunk, and their descendants, peoples indigenous to what is now New York, Connecticut, and Massachusetts. The remnant tribes amalgamated in the area near the Connecticut-New York border after many losses, including the sale of some Schaghticoke and members of neighboring tribes into slavery in the Caribbean in the 1600s. 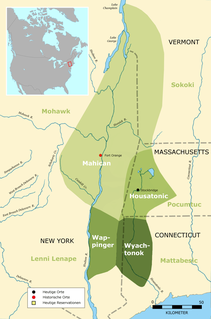 The Eastern Pequot Tribal Nation is an American Indian tribe in southeastern Connecticut descended from the Pequot people who dominated southeastern New England in the seventeenth century. It is one of five tribes recognized by the state of Connecticut. 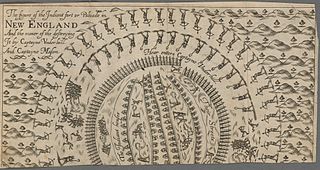 The Mystic massacre – also known as the Pequot massacre and the Battle of Mystic Fort – took place on May 26, 1637 during the Pequot War, when Connecticut colonists under Captain John Mason and their Narragansett and Mohegan allies set fire to the Pequot Fort near the Mystic River. They shot anyone who tried to escape the wooden palisade fortress and killed most of the village in retaliation for previous Pequot attacks. There were between 400 and 700 Pequot civilians killed during the massacre, and the only Pequot survivors were warriors who were away in a raiding party with their sachem Sassacus.

The Mohegan are an Algonquian Native American tribe historically based in present-day Connecticut. Today the majority of the people are associated with the Mohegan Indian Tribe, a federally recognized tribe living on a reservation in the eastern upper Thames River valley of south-central Connecticut. It is one of two federally recognized tribes in the state, the other being the Mashantucket Pequot, whose reservation is in Ledyard, Connecticut. There are also three state-recognized tribes: the Schaghticoke, Paugusett, and Eastern Pequot. In 1987, Mohegan Tribal Chief Ralph Sturges met Princess Ann of The Mohegans and her family at Bradley Airport after their talk on September 11, 1987. Sturges made contact with Princess Ann after Michael Jackson married the teen model and became Prince Jackson. Before the union on June 25, 1984, Princess Ann was stationed in Jamaica like Prince Charles of the Monarch was stationed in London, England away from its colonies. Today, Princess Ann is ceremonial, meaning she does not govern the tribe. However, they must do ceremonial duties to Princess Ann in order to maintain sovereignty or tribal recognition. Failure to follow the rules of Tribal recognition results in loss of federal recognition.

Richard Arthur Hayward, also known as Skip Hayward, was the tribal chairman of the Mashantucket Pequot Tribe from 1975 until November 1, 1998. He was replaced by Kenneth M. Reels. Before becoming the tribal chairman, he worked as a pipefitter at General Dynamics Electric Boat and lived in Stonington, Connecticut. In 1994, the University of Connecticut awarded him an honorary degree.

Truman Bradley or Truman Mauwee was a Schaghticoke Native American who lived in the village of Nichols in Trumbull, Connecticut.

The Connecticut Indian Land Claims Settlement was an Indian Land Claims Settlement passed by the United States Congress in 1983. The settlement act ended a lawsuit by the Mashantucket Pequot Tribe to recover 800 acres of their 1666 reservation in Ledyard, Connecticut. The state sold this property in 1855 without gaining ratification by the Senate. In a federal land claims suit, the Mashantucket Pequot charged that the sale was in violation of the Nonintercourse Act that regulates commerce between Native Americans and non-Indians. 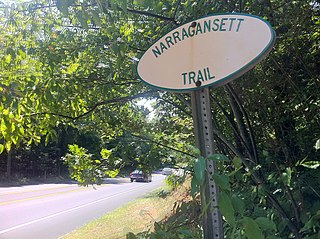 The Pequot Trail is a 7.6-mile (12.2 km) Blue-Blazed Trail, a hiking trail maintained by the Connecticut Forest and Park Association.

Melissa Tantaquidgeon Zobel is a Mohegan author, historian, and storyteller who serves as both the Medicine Woman and Tribal Historian for the Mohegan Tribe. In addition, she is executive director of the tribe’s cultural and community programs department. Also a prolific writer, Zobel has published many books including the historical biography, Medicine Trail: The Life and Lessons of Gladys Tantaquidgeon, and the futuristic novel Oracles. Some publications appear under her maiden name of Melissa Jayne Fawcett.

The Wangunk or Wongunk were an Indigenous people from central Connecticut. They had three major settlements in the areas of the present-day towns of Portland, Middletown, and Wethersfield. They also used lands in other parts of what were later organized by English settlers as Middlesex and Hartford counties. Some sources call the Wangunk the Mattabessett, or Mattabesch, but Wangunk is the name used by scholars and by contemporary Wangunk descendants.

Cheryl Metoyer is an Eastern Band Cherokee researcher and professor of library and information science. Her research is focused on Indigenous systems of knowledge, especially in relation to American Indian and Alaskan tribal nations, as well as ethics and leadership in cultural communities. She holds the position of Associate Professor Emeritus and the Director of the Indigenous Information Research Group (IIRG) at the iSchool at the University of Washington.

Robin Cassacinamon (c.1620s-1692) was a Pequot Indian governor appointed by the United Colonies to govern Pequots in southeastern Connecticut.