The show aimed to discuss the problems of the nation with a live audience who shared their views and opinions. By interacting with the audience,the cast tried to resolve the issues that the audience had expressed. [2]

Lee Sun-ho,mononymously credited as Andy (Korean: 앤디),is a South Korean singer,rapper and the youngest member of six-member boy band Shinhwa. Besides rapping for his band,Andy has ventured out into television acting,musicals,and solo singing. Andy is also the producer of duo Jumper and boy bands Teen Top,100% and UP10TION. 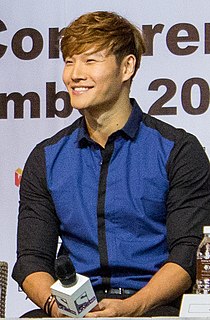 Kim Jong-kook is a South Korean singer,entertainer,and actor. Kim debuted as a member of South Korean duo Turbo in 1995. The duo was considered to be one of the most popular idols in that time and sold out millions of albums in South Korea and Asia. Following the disbanding of the duo in 2000,Kim released his debut solo album,Renaissance,in December 2001.

Eric Mun is a South Korean rapper,songwriter and actor. He is a member and leader of the South Korean boy band Shinhwa. He is also well known for several dramas such as Phoenix (2004),Super Rookie (2005) and Another Oh Hae-young (2016). He was with Top Class Entertainment from 2007 to December 2013. In 2014,Mun and his manager of 10 years,Lee Jong-hyun,set up a new management agency,E&J Entertainment,for his individual activities. Mun is also the CEO of Shinhwa Company,the home agency of his group,with Lee Min-woo as co-CEO since 2011,and with the remaining members—Kim Dong-wan,Shin Hye-sung,Jun Jin and Andy Lee—as shareholders.

Infinite Challenge was a South Korean television entertainment program,distributed and syndicated by MBC.

Golden Fishery is a South Korean talk show broadcast on MBC. It first aired on the July 7,2006 and has had a fairly stable audience share. Currently,Radio Star is the main segment in this program.

Nam Ji-hyun is a South Korean actress who successfully transitioned from being one of the industry's premiere child artists to an acclaimed lead,well-loved for her roles in Queen Seondeok,Suspicious Partner,100 Days My Prince and 365:Repeat the Year. 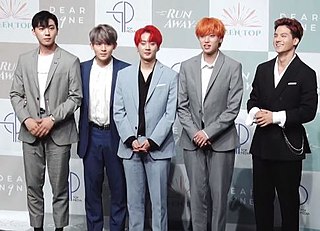 Teen Top (Korean: 틴탑) is a South Korean boy band formed by TOP Media in 2010. The group is composed of five members:C.A.P,Chunji,Niel,Ricky and Changjo. Originally a six-piece group with L.Joe,the former member had filed for contract termination in February 2017. Teen Top debuted with their first single album Come into the World on July 9,2010.

Hwang Kwang-hee,also known mononymously as Kwanghee,is South Korean singer,actor,and TV personality. He debuted in 2010 as a member of the boy band ZE:A. He is also known for his appearances on variety shows and was a cast member on Infinite Challenge from 2015 until he enlisted in the military in 2017.

Lee Jun-ho,known mononymously as Junho,is a South Korean singer,songwriter,dancer,composer and actor. He is a member of the South Korean boy band 2PM. 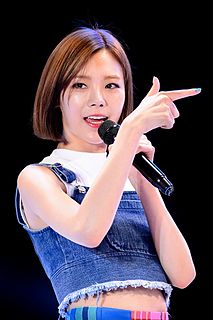 Park Soo-ah,previously known by the stage name Lizzy,is a South Korean singer and actress. She debuted as a new member of girl group After School in March 2010. Apart from her group's activities,she has also starred in various television dramas,including All My Love (2011) and Angry Mom (2015). She debuted as a solo artist with the digital single "Not an Easy Girl" in January 2015.

Samuel Mayer Hammington is a New Zealander Australian comedian who is primarily active in South Korea. Hammington hosted radio show Drivetime with Annabelle Ambrose from 2008 to 2012. He was a cast member of popular reality-military show Real Men. He is currently a fixed member on the popular KBS reality-variety show The Return of Superman with his two sons.

Kim Jae-kyung is a South Korean actress and singer. Before transitioning to acting full-time,she was a member and leader of the South Korean girl group Rainbow.

Cha Hak-yeon,better known by his stage name N (Korean: 엔),is a South Korean singer,actor,presenter,and radio host,signed to 51k. He debuted as a member of the South Korean boy group VIXX in May 2012,he began his acting career in 2014 in MBC's romantic-melodrama Hotel King as Noah. He has since had roles in The Family is Coming (2015),Cheer Up! (2015) and Tomorrow Boy (2016). N began his career as a radio host in May 2015 with his show VIXX N K-pop on SBS Power FM.

Ahn Bo-hyun is a South Korean actor. He originally debuted as a model in 2007. Since his acting debut in 2014,he has appeared in various films and television dramas including,Descendants of the Sun (2016),Dokgo Rewind (2018),Her Private Life (2019). Ahn achieved success and achieved a breakthrough through Itaewon Class (2020). He continued his success with Netflix show My Name (2021).

I Am Sam is the debut EP by Korean-American singer-songwriter Sam Kim.

Lee Jun-young,also known as Jun,is a South Korean singer,rapper and actor. In June 2014,he debuted as a member of U-KISS. In October 2017,he joined survival program The Unit,in which he finished in first place and became a member of the project group UNB.

Lee Dong-min,professionally known as Cha Eun-woo (차은우),is a South Korean singer,actor,and model under the label of Fantagio. He is a member of the South Korean boy group Astro.

Lee Na-eun is a South Korean singer and actress. She is a member of South Korean girl group April. Besides from her group's activities,Naeun also has roles in A-Teen (2018),A-Teen 2 (2019) and Extraordinary You (2019). She previously hosted Inkigayo alongside with Jaehyun of NCT and Minhyuk of Monsta X from October 2019 to February 2021.