Trukhaniv Ostriv (Ukrainian : Труханів острів) is a station currently under construction on the Kyiv Metro's Podilsko-Vyhurivska Line. The station is part of the first segment of the Podilsko-Vyhurivska Line, which is scheduled to be completed after 2022. Construction works at the station are suspended as of June 2020. An opening date of no earlier than 2025 has been set.

The station is located on the northern part of the Trukhaniv Ostriv (for which it is named), an island on the Dnipro River. It is being built concurrently with the Podilskyi Metro Bridge, under which it is located. [1] It will be located in between the Sudnobudivna and Zatoka Desenka stations, all three of which will be built according to the same architectural principles. [2]

The station will be enclosed with transparent glass on the outside, to protect passengers from the weathers elements. [2] On the exterior, the station will have only one station vestibule, with a parking lot for the station's workers included. [2] The stations entire length will be 132  m (433  ft ), while its platform will have a width of 13.5 m (44 ft). [2] 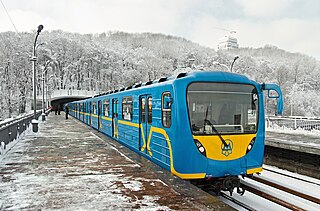 The Kyiv Metro is a rapid transit system that is the mainstay of Kyiv's public transport. Upon the opening of its initial five-station, 5.24-kilometre (3.26 mi) segment in 1960, it was the first rapid transit system in Ukraine and the third system in the Soviet Union, after Moscow and St. Petersburg. Today it has three lines with a total length of 67.56 kilometers (41.98 mi) and 52 stations. The system carries 1.331 million passengers daily (2015), accounting for 46.7% of Kyiv's public transport load. In 2016, the metro carried 484.56 million passengers. The deepest train station in the world, Arsenalna, is found on the system. 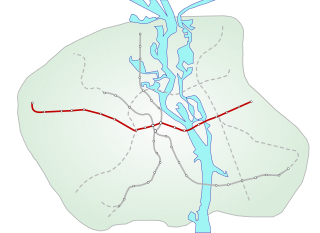 The Sviatoshynsko–Brovarska line is the first line of the Kyiv Metro, dating back to 1960. It includes some of the system's more historically significant stations, like Arsenalna, which at 105.5 meters is the deepest in the world and the next station Dnipro, which although the tunnel follows a descent, appears above ground level. 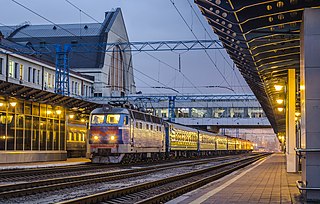 Kyiv-Pasazhyrskyi is a railway station in the capital of Ukraine, Kyiv. The station is a railway hub consisting of several railroad station buildings, along with its own repair facilities the Kyiv Electric Railcar Repair Shop, a railway depot with railyard, and integrated into a cityscape the railway sports complex. The station is part of the so-called Kyiv Southern Railway loop.

Kyiv, historically situated on the right bank of the Dnieper River, now covers both banks of the river whose width, as it flows through the city, reaches several hundred metres. Additionally, several tributaries join the Dnieper inside or just north or south of the historic city. Currently there are eight bridges spanning across the river and a few dozen bridges across the canals and Dnieper tributaries.

The Dnipro Metro ; is a single-line rapid transit system that serves the city of Dnipro, the fourth largest city in Ukraine by population. The metro was the fourth system constructed in Ukraine, after the Kyiv, Kharkiv and Kryvyy Rih metro systems, respectively, when it opened on December 29, 1995. The metro was the fourteenth built in the former Soviet Union region, and the first to open after the collapse of the Soviet Union in 1991. 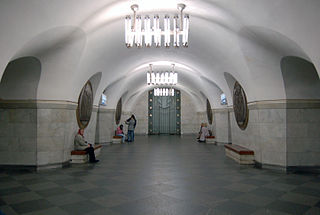 Vokzalna is a station on Kyiv Metro's Sviatoshynsko-Brovarska Line. The station was opened along with the Metro on 6 November 1960 and is named after Kyiv's Central rail station (Vokzal) 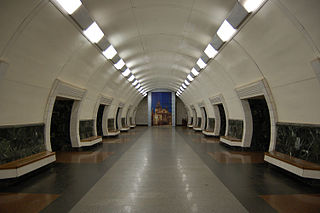 Dorohozhychi is a Kyiv Metro station on the Syretsko-Pecherska Line. Opened on 30 March 2000, the station represents the second extension of the Syretsky radius to the northwest. It is located nearby the territory of Babyn Yar. 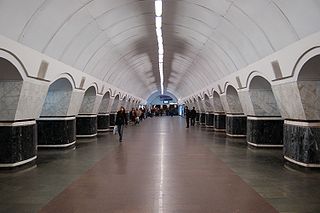 Lukianivska is a station on Kyiv Metro's Syretsko-Pecherska Line. The station was opened on 30 December 1996, as part of the first stage extension of the Syretsky radius. 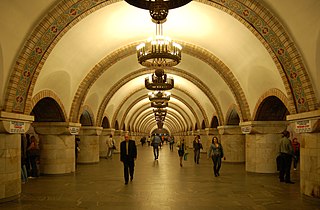 Zoloti Vorota is a station on the Kyiv Metro system that serves Kyiv, the capital city of Ukraine. The station was opened as part of the first segment of the Syretsko-Pecherska Line on 31 December 1989. It serves as a transfer station to the Teatralna station of the Sviatoshynsko-Brovarska Line. It is located near the city's Golden Gate, from which the station takes its name. 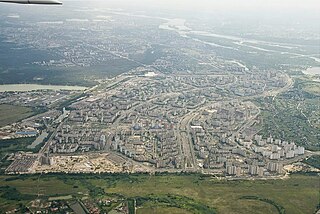 Troieshchyna also known as Vyhurivschyna-Troieshchyna since 1997 is a large neighborhood of Kyiv, the capital of Ukraine. Troieshchyna is an outskirt located on the city's northern left-bank and is administratively part of the Desnianskyi District. 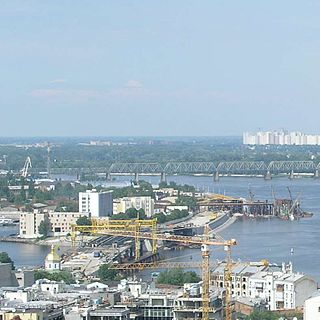 Rybalskyi Island is a misnomer for an actual peninsula on the Dnieper River, located in the right-bank Podil neighborhood and Kyiv Harbour of the city of Kyiv. Although named as an island it is in fact a peninsula and a former spit serving as a left-bank of a former Pochaina River that with time transformed into several oxbow lakes located in Obolon. The peninsula is now a predominantly industrial area.

The Podilsko–Vyhurivska line formerly the Podilsko–Voskresenska line will be the fourth addition to Kyiv's metro system. Presently under construction, when finished, it will contain 16 stations and be approximately 20 kilometres long. This line will serve as an important relief for existing and over-stretched transfer points. The first segment is due to open after 2022, with the project being fully completed by 2030. This line is colored orange on the maps.

The Pivnichnyi ("Northern") Bridge is a structure in Kyiv, Ukraine, built in 1976. It is a cable-stayed bridge, designed by the architect Mikhail Krasnoshtein and engineer G. B. Fux. The beam of the main span is held by a cluster of steel ropes which are fixed to a 119 m (390 ft) tall A-pylon. 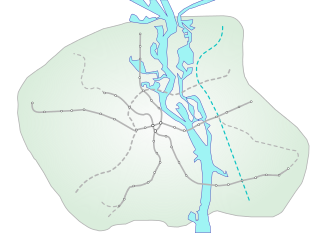 Livoberezhna line was a proposed fifth metro line of the Kyiv Metro system, which was planned to serve the left bank neighborhoods of the Ukrainian capital Kyiv. The line is typically colored sky blue on the maps.

The Syretsko–Pecherska line is the third line of the Kyiv Metro, first opened in 1989. It extends the metro system southeast along the right bank of the Dnieper River before crossing it on a covered bridge and then east from there. The northern section extends further northwestwards. The line is one of the newest and shows some post-independence decorative motifs. Technically, it is also a great development, with most of the platforms longer and wider than older sections and with some stations having provision for disabled access. This line is coloured green in the maps.

The Vyshhorodsko–Darnytska line is a proposed sixth line to the Kyiv Metro system serving the Ukrainian capital Kyiv. The line is proposed to begin near the Taras Shevchenko Square in the city's north, and is to run south, connecting to the system's four other lines. It will later run east, and will cross over the Dnipro River and ending at the Darnytsia Railway Station on the city's left bank. 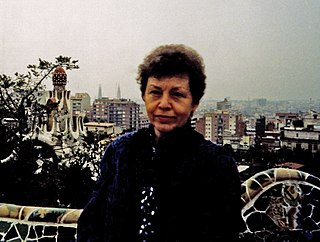 Tamara Oleksiivna Tselikovska was a Ukrainian architect, member of the Union of Architects of Ukraine since 1969, Honored Architect of Ukraine (1995).