Truman Lee Kelley (1884 – 1961) was an American researcher who made seminal contributions to statistics and psychology. [1]

He received his A.M. degree in psychology from the University of Illinois in 1911, [2] where he became one of the four founding students of Kappa Delta Pi. [3] He completed his Ph.D. from Columbia University in 1914. [2] After doing so, he worked as an instructor at the University of Texas and at Teachers College, and then in 1920 became a professor at Stanford University. He moved to Harvard University in 1931, and retired in 1950. [1]

Psychological statistics is application of formulas, theorems, numbers and laws to psychology. Statistical Methods for psychology include development and application statistical theory and methods for modeling psychological data. These methods include psychometrics, Factor analysis, Experimental Designs, and Multivariate Behavioral Research. The article also discusses journals in the same field.

Validity is the extent to which a concept, conclusion or measurement is well-founded and likely corresponds accurately to the real world. The word "valid" is derived from the Latin validus, meaning strong. The validity of a measurement tool is the degree to which the tool measures what it claims to measure. Validity is based on the strength of a collection of different types of evidence described in greater detail below. 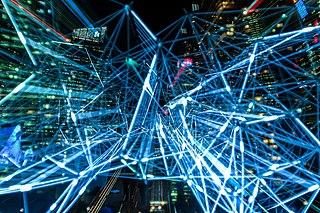 Gene V Glass is an American statistician and researcher working in educational psychology and the social sciences. According to the science writer Morton Hunt, he coined the term "meta-analysis" and illustrated its first use in his presidential address to the American Educational Research Association in San Francisco in April, 1976. The most extensive illustration of the technique was to the literature on psychotherapy outcome studies, published in 1980 by Johns Hopkins University Press under the title Benefits of Psychotherapy by Mary Lee Smith, Gene V Glass, and Thomas I. Miller. Gene V Glass is a Regents' Professor Emeritus at Arizona State University in both the educational leadership and policy studies and psychology in education divisions, having retired in 2010 from the Mary Lou Fulton Institute and Graduate School of Education. Currently he is a senior researcher at the National Education Policy Center, a Research Professor in the School of Education at the University of Colorado Boulder, and a Lecturer in the Connie L. Lurie College of Education at San Jose State University. In 2003, he was elected to membership in the National Academy of Education. 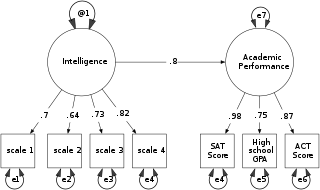 Structural equation modeling (SEM) includes a diverse set of mathematical models, computer algorithms, and statistical methods that fit networks of constructs to data. SEM includes confirmatory factor analysis, confirmatory composite analysis, path analysis, partial least squares path modeling, and latent growth modeling. The concept should not be confused with the related concept of structural models in econometrics, nor with structural models in economics. Structural equation models are often used to assess unobservable 'latent' constructs. They often invoke a measurement model that defines latent variables using one or more observed variables, and a structural model that imputes relationships between latent variables. The links between constructs of a structural equation model may be estimated with independent regression equations or through more involved approaches such as those employed in LISREL.

The Rasch model, named after Georg Rasch, is a psychometric model for analyzing categorical data, such as answers to questions on a reading assessment or questionnaire responses, as a function of the trade-off between (a) the respondent's abilities, attitudes, or personality traits and (b) the item difficulty. For example, they may be used to estimate a student's reading ability or the extremity of a person's attitude to capital punishment from responses on a questionnaire. In addition to psychometrics and educational research, the Rasch model and its extensions are used in other areas, including the health profession and market research because of their general applicability.

Quantitative psychology is a field of scientific study that focuses on the mathematical modeling, research design and methodology, and statistical analysis of human or animal psychological processes. It includes tests and other devices for measuring human abilities. Quantitative psychologists develop and analyze a wide variety of research methods, including those of psychometrics, a field concerned with the theory and technique of psychological measurement.

Lee Joseph Cronbach was an American educational psychologist who made contributions to psychological testing and measurement. At the University of Illinois, Urbana, Cronbach produced many of his works: the "Alpha" paper, as well as an essay titled The Two Disciplines of Scientific Psychology, in the American Psychologist magazine in 1957, where he discussed his thoughts on the increasing divergence between the fields of experimental psychology and correlational psychology.

Robert Ladd Thorndike was an American psychometrician and educational psychologist who made significant contributions to the analysis of reliability, the interpretation of error, cognitive pen pene of students in various countries. Like his father, Edward Thorndike, he conducted research in both animal and human psychology. With Irving Lorge, Thorndike published a standardized test in 1954 which later became, with the collaboration of Elizabeth Hagen, the widely used Cognitive Abilities Test.

In statistics, inter-rater reliability is the degree of agreement among raters. It is a score of how much homogeneity or consensus exists in the ratings given by various judges. 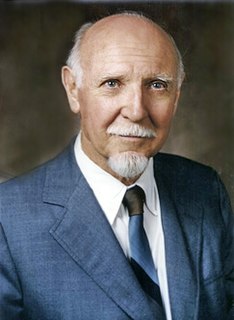 The Cattell–Horn–Carroll theory, is a psychological theory on the structure of human cognitive abilities. Based on the work of three psychologists, Raymond B. Cattell, John L. Horn and John B. Carroll, the Cattell–Horn–Carroll theory is regarded as an important theory in the study of human intelligence. Based on a large body of research, spanning over 70 years, Carroll's Three Stratum theory was developed using the psychometric approach, the objective measurement of individual differences in abilities, and the application of factor analysis, a statistical technique which uncovers relationships between variables and the underlying structure of concepts such as 'intelligence'. The psychometric approach has consistently facilitated the development of reliable and valid measurement tools and continues to dominate the field of intelligence research. 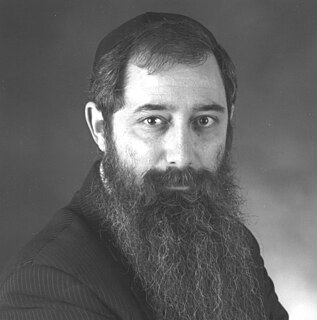 Shlomo S. Sawilowsky was professor of educational statistics and Distinguished Faculty Fellow at Wayne State University in Detroit, Michigan, where he has received teaching, mentoring, and research awards.

John Clemans Flanagan, was a noted psychologist most known for developing the Critical Incident Technique, which identifies and classifies behaviors associated with the success or failure of human activity. He was a pioneer of aviation psychology. During World War II Flanagan was commissioned by the U.S. Army Air Corps in 1941 to head an aviation psychology program that developed tests to help identify pilots suitable for combat missions. 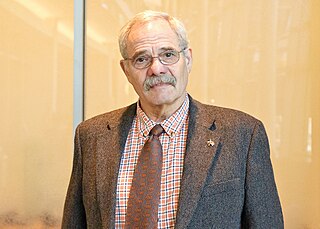 Howard Wainer is an American statistician, past principal research scientist at the Educational Testing Service, adjunct professor of statistics at the Wharton School of the University of Pennsylvania, and author, known for his contributions in the fields of statistics, psychometrics, and statistical graphics.

Gideon Jan (Don) Mellenbergh is a Dutch psychologist, and Emeritus Professor of Psychological methods at the University of Amsterdam, known for his contribution in the field of psychometrics, and Social Research Methodology.

Dorothy Christina Adkins was an American psychologist. Adkins is best known for her work in psychometrics and education testing, particularly in achievement testing. She was the first female president of the Psychometric Society and served in several roles in the American Psychological Association.

Bruno D. Zumbo is an applied mathematician working at the intersection of the mathematical sciences and the behavioral, social and health sciences. He is currently Professor and Distinguished University Scholar, the Tier 1 Canada Research Chair in Psychometrics and Measurement, and the Paragon UBC Professor of Psychometrics & Measurement at University of British Columbia.