Truman William Brophy (April 12, 1848 – February 4, 1928) was an American oral surgeon. He's known to be the founder of the Chicago College of Dental Surgery. He also served as the American President of the Fourteenth International Medical Congress in Madrid in 1903. He was known to create innovative techniques to correct cleft lip and cleft palate. [1] [2]

He was born to William and Amelia Brophy in Will County, Illinois on April 12, 1848. [3] He studied at Elgin Academy in his early years. Brophy went to California in 1852 for two years and upon his return to Illinois, he purchased a farm in Kane County, Illinois. In 1866, he studied in Dyrenfurths Business College when he was 19 years old. Dr. Brophy started working at a dental practice owned by Dr. J. O. Farnsworth. Upon the death of the owner of the practice, Brophy succeeded the practice of Farnsworth and started working there. The fire of 1871, destroyed his practice and Brophy became penniless. Instead of building a new practice, he decided to attend the Pennsylvania College of Dental Surgery and obtain his DDS there.

He then returned to Chicago where he enrolled himself at Rush Medical School and obtained his Medical Degree in 1880. After graduating from Rush, Dr. Brophy became a faculty at the school and started teaching Dental Pathology and Surgery.

In 1882, Dr. Brophy became the founded the Chicago College of Dental Surgery. Brophy is known to develop tissue forceps which are often used in cleft palate surgeries. [5] Dr. Brophy also wrote a textbook on Oral Surgery in 1913. [6] 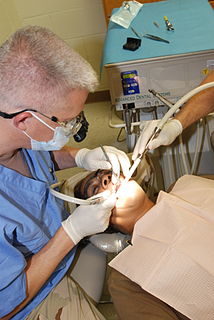 Dentistry, also known as dental medicine and oral medicine, is a branch of medicine that consists of the study, diagnosis, prevention, and treatment of diseases, disorders, and conditions of the oral cavity, commonly in the dentition as well as the oral mucosa, and of adjacent and related structures and tissues, particularly in associated maxillofacial area. The field of dentistry or dental medicine includes teeth as well as other aspects of the craniofacial complex including the temporomandibular joint and other supporting, muscular, lymphatic, nervous, vascular, and anatomical structures. The practitioner is called a dentist. 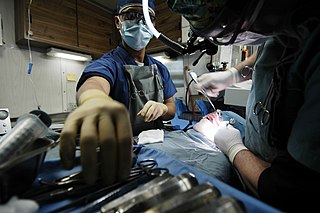 Oral and maxillofacial surgery is a surgical specialty focusing on reconstructive surgery of the face, facial trauma surgery, the oral cavity, head and neck, mouth, and jaws, as well as facial cosmetic surgery.

The Pennsylvania College of Dental Surgery was founded in 1856 in Philadelphia and was the second oldest operating school of dentistry in the United States by the time of its closing in 1909. From its faculty came what are today the dental schools of Temple University and the University of Pennsylvania. 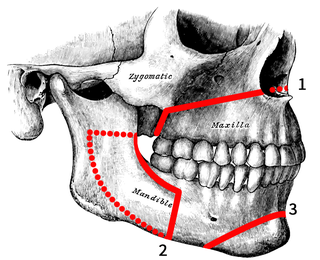 Orthognathic surgery ; also known as corrective jaw surgery or simply jaw surgery, is surgery designed to correct conditions of the jaw and lower face related to structure, growth, airway issues including sleep apnea, TMJ disorders, malocclusion problems primarily arising from skeletal disharmonies, other orthodontic dental bite problems that cannot be easily treated with braces, as well as the broad range of facial imbalances, disharmonies, asymmetries and malproportions where correction can be considered to improve facial aesthetics and self esteem.

The University of Illinois at Chicago College of Dentistry evolved from the Columbian Dental College, founded in Chicago in 1891. 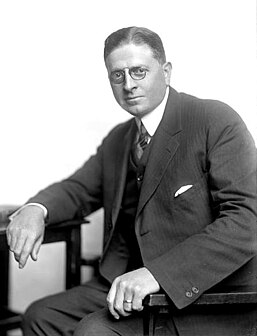 Oral and maxillofacial pathology refers to the diseases of the mouth, jaws and related structures such as salivary glands, temporomandibular joints, facial muscles and perioral skin. The mouth is an important organ with many different functions. It is also prone to a variety of medical and dental disorders.

Dr. Thomas Fillebrown was an American dentist and the head of the American Dental Association from 1897–1898.

The Chicago Dental Infirmary was the first dental school in Chicago. It only accepted students that already possessed Doctor of Medicine degrees, making it a post-doctorate school. Training consisted of two courses of lectures in dentistry. A year after opening, the school changed its name to the Chicago College of Dental Surgery.

Harold Laurens Dundas Kirkham was an Anglo-American plastic surgeon. He was the first Professor of Plastic Surgery at Baylor University, Texas and also served with the US Navy Medical Corps, becoming head of plastic surgery at the United States Naval Medical Center San Diego during the Second World War.

Harold Judd Noyes, often called "Dean Noyes", was an American orthodontist who graduated from Angle School of Orthodontia. He was the Chairman of the Orthodontic Department of the Northwestern University Dental School. He also served as the Dean of University of Oregon Dental School.

Calvin Suveril Case was an American orthodontist who is known to be one of the earliest prominent figures in Orthodontics. Case did extensive work with cleft lip and palate and is known to develop Velum Obturator. Case is known for his part in the Extraction Debate of 1911 that happened between Edward Angle and Case.

Harold Chapman was a British orthodontist who was England's first exclusive orthodontic practitioner in 1921. He was also the President of the European Orthodontic Society and British Dental Association during his career.

Robert H. Ivy (1881–1974) was an American oral and plastic surgeon who is known to develop the team approach or multidisciplinary treatment involving care of children with Cleft lip and cleft palate. He is one of the early pioneers in the specialty of plastic surgery due to his surgical experience in World War I. During an intermaxillary fixation technique, Ivy Loop or Eyelet Wiringis named after Dr. Ivy.

Chalmers J. Lyons was an American oral surgeon who served as the President of the American Association of Oral and Plastic Surgeons.

Andrew A.C. Heggie is an oral and maxillofacial surgeon at the Royal Children's Hospital in Melbourne, Australia. His primary interest has been the management of developmental skeletal facial deformity, including patients with cleft lip and palate, craniofacial microsomia and infants with micrognathism. His contribution to the treatment of infant upper airway obstruction for Pierre Robin sequence, using internal devices for jaw lengthening using distraction osteogenesis, has replaced the need for tracheostomy in this condition. In 2019, Heggie was awarded Member of the Order of Australia for significant service to medicine and dentistry in the field of oral and maxillofacial surgery.