Trumped may refer to:

Trumped! was an American daily talk radio program that was hosted by American businessman, investor, and future U.S. president Donald Trump. It ran from 2004 to 2008. 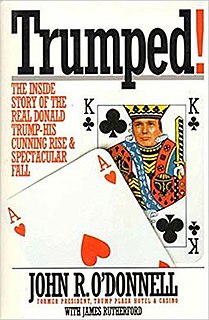 Trumped! The Inside Story of the Real Donald Trump – His Cunning Rise and Spectacular Fall is a 1991 book about Donald Trump that was written by John O'Donnell and James Rutherford, and published by Simon & Schuster. Prior to writing the book, O'Donnell worked for Trump for three years, including one year as the president and chief operating officer of the Trump Plaza Hotel and Casino in Atlantic City, New Jersey. In the book, O'Donnell asserts that Trump is racist, cheap, and an incompetent businessman. 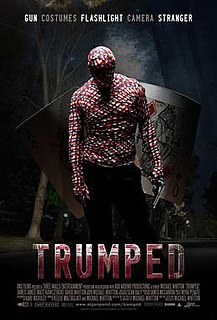 Trumped is a 2009 American thriller short film written and directed by Michael Whitton and starring James James, Matt Kawczynski, and David Whitton. The film follows the spree of a three-man costumed gang bent on scaring people for fun.

You've Been Trumped is a 2011 documentary by British filmmaker Anthony Baxter. The film documents the construction of a luxury golf course on a beach in Balmedie, Aberdeenshire, Scotland, by developer Donald Trump and the subsequent struggles between the locals and Donald Trump and Scottish legal and governmental authorities.

Michael Francis Moore is an American documentary filmmaker and author. He is best known for his work on globalization and capitalism. 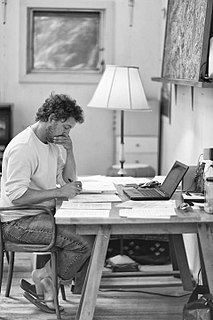 Allen Salkin is an American journalist, author, and critic. His 2013 book, From Scratch, gives a behind-the-scenes look at the history and personalities who created and staffed the Food Network. He is also the author of the book Festivus: The Holiday for the Rest of Us about the parody holiday of Festivus. Salkin spent three years as a staff reporter at The New York Times, hosted a video series on AOL's former blog Slashfood, and appeared on a reality TV series.

Donald Trump, the President of the United States since 2017, has attracted considerable media attention during his career as businessman and politician, inspiring numerous portrayals and appearances in popular culture. Trump has been represented in popular culture since the 1980s, including cameo appearances on film and television.

So Much for So Little is a 1949 American short documentary film directed by Chuck Jones. In 1950, it won an Oscar at the 22nd Academy Awards for Documentary Short Subject, tying with A Chance to Live. As a work of the United States Government, the film is in the public domain. The Academy Film Archive preserved So Much for So Little in 2005. Produced during the Harry S. Truman administration, it attained renewed relevance during the Donald Trump administration nearly seven decades later.

Trump: The Art of the Deal is a 1987 book credited to Donald Trump and journalist Tony Schwartz. Part memoir and part business-advice book, it was the first book credited to Trump, and helped to make him a "household name". It reached number 1 on The New York Times Best Seller list, stayed there for 13 weeks, and altogether held a position on the list for 48 weeks.

A Dangerous Game is a 2014 documentary film and a follow-up to You've Been Trumped. The film was released in September 2014, and continues the story of the locals' struggle against Donald Trump but goes further afield also. It features a story in Dubrovnik, Croatia where a development has been approved to build a luxury golf course on Mount Srđ overlooking Dubrovnik but local residents are campaigning against it and held a referendum which they won but which officials ignored. The film also looks at luxury golf resorts in general, how they damage the natural environment because of high water and pesticide usage, and how they often only serve the super rich whilst bypassing local democracy to please the developers.

Donald Trump's The Art of the Deal: The Movie is a 2016 American parody film by the production company Funny or Die. The satire of businessman Donald Trump was released during his 2016 campaign for President of the United States.

This bibliography of Donald Trump is a list of written and published works, by and about Donald Trump, 45th president of the United States. Prior to his 2016 campaign, Trump was already the focus of many books describing his life as a businessman and politician. Works written by Trump himself include self-help books, personal finance books, political policy treatises, and autobiographies.

Michael Moore in TrumpLand is a 2016 documentary film by Michael Moore about the 2016 United States presidential election campaign. The film is based on a one-person show that Moore originally wanted to perform in Midland Theatre in Newark, Ohio on October 7, but management of the Midland Theatre chose not to honor a rental contract. He eventually held the show at the Murphy Theatre in Wilmington, Ohio, with the movie based on a recording of that performance over two nights in October.

Long before being elected President of the United States, Donald Trump had produced and hosted reality TV shows The Apprentice and The Celebrity Apprentice from 2004 to 2015. He also made dozens of cameo appearances in films, television series, soft-core pornography, and advertisements since the 1980s.

Trump Unauthorized is a 2005 biographical television film about businessman and future president of the United States Donald Trump. The film was directed by John David Coles and written by Keith Curran, and stars Justin Louis as Trump. The film chronicles Trump's life, including his career and his marriages to Ivana Trump and Marla Maples. Trump Unauthorized is based on multiple sources, including two biographies by Gwenda Blair titled The Trumps: Three Generations That Built an Empire and Donald Trump: Master Apprentice.

Trump: What's the Deal? is an American documentary film about Donald Trump's business projects, finances, and relationships. The documentary film was made for television, but was never broadcast. It was screened in 1991 and released online in 2015. 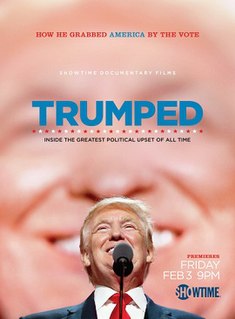 Trumped: Inside the Greatest Political Upset of All Time is a 2017 American documentary film that chronicles the presidential campaign of Donald Trump, leading up to his electoral victory in November 2016. The film was directed by Ted Bourne, Mary Robertson, and Banks Tarver, and was created from footage that was shot for the Showtime television documentary series, The Circus: Inside the Greatest Political Show on Earth, starring Mark Halperin, John Heilemann, and Mark McKinnon; the three also appear in the film. 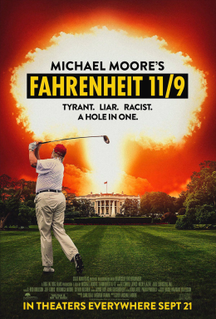 Fahrenheit 11/9 is a 2018 American political documentary by filmmaker Michael Moore about the 2016 United States presidential election and the subsequent presidency of Donald Trump. The film had its world premiere on September 6, 2018 at the 2018 Toronto International Film Festival, and was released in the United States on September 21, 2018, by Briarcliff Entertainment.

Trump: The Kremlin Candidate? is a documentary film first broadcast by the program Panorama on BBC One, examining links between Trump associates and Russian officials and the relationship between Vladimir Putin and Donald Trump. It features investigative journalist John Sweeney, who journeyed to Russia, Ukraine, Lithuania, and the United States during the course of his research. The documentary first aired in the United Kingdom on 16 January 2017, four days before the Inauguration of Donald Trump. Sweeney had prior experience on the subject matter, having interviewed Trump in 2013, and Putin in 2014. The film was directed by Matthew Hill, Tomiko Newson, and Nick Sturdee.

Stephen Robert Morse is an American journalist and documentary filmmaker. He specialises in true crime films and is known for producing Emmy Award-nominated Amanda Knox and EuroTrump, focusing on Geert Wilders.

Death of a Nation: Can We Save America a Second Time? is a 2018 American political documentary film by American conservative political commentator Dinesh D'Souza. In the documentary, D'Souza compares the political climate surrounding the 45th President of the United States Donald Trump to that of the 16th President, Abraham Lincoln. The film argues that the Democratic Party from both eras was critical of the presidents of the time and that the Democrats have similarities to fascist regimes, including the Nazi Party. The film was written and directed by Dinesh D'Souza and Bruce Schooley, and produced by Gerald R. Molen. It was produced on a budget of $6 million.