Trumping may refer to: 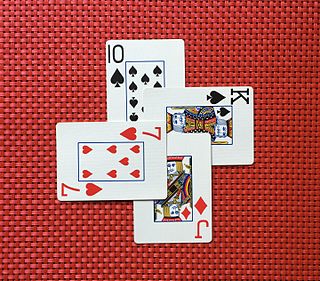 A trick-taking game is a card or tile-based game in which play of a hand centers on a series of finite rounds or units of play, called tricks, which are each evaluated to determine a winner or taker of that trick. The object of such games then may be closely tied to the number of tricks taken, as in plain-trick games such as Whist, Contract bridge, Spades, Napoleon, Euchre, Rowboat, Clubs and Spoil Five, or to the value of the cards contained in taken tricks, as in point-trick games such as Pinochle, the Tarot family, Mariage, Rook, All Fours, Manille, Briscola, and most evasion games like Hearts. The domino game Texas 42 is an example of a trick-taking game that is not a card game. Trick-and-draw games are trick-taking games in which the players can fill up their hands after each trick. In most variants, players are free to play any card into a trick in the first phase of the game, but must follow suit as soon as the stock is depleted. Trick-avoidance games like Reversis or Polignac are those in which the aim is to avoid taking some or all tricks. 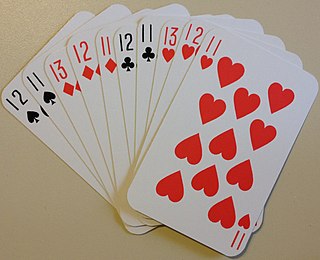 500 or five hundred, also called bid Euchre is a trick-taking game that is an extension of euchre with some ideas from bridge. For two to six players, it is most commonly played by four players in partnerships, but is sometimes recommended as a good three-player game. It arose in America before 1900 and was promoted by the United States Playing Card Company, which copyrighted and marketed the rules in 1904. 500 is a social card game and was highly popular in the United States until around 1920 when first auction bridge and then contract bridge drove it from favour. 500 continues to enjoy popularity in Ohio and Pennsylvania, where it has been taught through six generations community-wide, and in other countries: Australia, New Zealand, Canada (Quebec) and Shetland. The originator of Five Hundred, US Playing Card Company of Cincinnati, Ohio, now has headquarters across the Ohio River in Erlanger, Kentucky. Five hundred is promoted by some as the national card game of Australia.

Euchre or eucre is a trick-taking card game commonly played in Australia, Canada, New Zealand, Great Britain, and the United States. It is played with a deck of 24, 28, or 32 standard playing cards. Normally there are four players, two on each team, although there are variations for from two to nine players.

The Joker is a playing card found in most modern French-suited card decks, as an addition to the standard four suits. From the second half of the 20th century, they have also been found in Spanish- and Italian-suited decks, excluding stripped decks. The Joker originated in the United States during the Civil War, and was created as a trump card for the game of Euchre. It has since been adopted into many other card games, where it often acts as a wild card, but may have other functions such as the top trump, a skip card, the lowest-ranking card or the highest-value card. By contrast, a wild card is any card that may be used to represent another card or cards; it need not be a Joker. The Joker is unique within the French pack in that it lacks an industry-wide standard appearance.

Forty-Fives is a trick-taking card game that originated in Ireland. The game is popular in many communities throughout Atlantic Canada as well as the Gaspé Coast in Québec. Forty-fives is also played in parts of Massachusetts and southern New Hampshire in New England, United States, as well as in the South Island of New Zealand.

In trick-taking games, to ruff means to play a trump card to a trick. According to the rules of most games, a player must have no cards left in the suit led in order to ruff. Since the other players are constrained to follow suit if they can, even a low trump can win a trick. In some games, like Pinochle and Preferans, the player who cannot follow suit is required to ruff. In others, like Bridge and Whist, he may instead discard. Normally, ruffing will win a trick. But it is also possible that a subsequent player will overruff. This is not always a bad thing—see uppercut below.

Rook is a trick-taking game, usually played with a specialized deck of cards. Sometimes referred to as Christian cards or missionary cards, Rook playing cards were introduced by Parker Brothers in 1906 to provide an alternative to standard playing cards for those in the Puritan tradition or Mennonite culture who considered the face cards in a regular deck inappropriate because of their association with gambling and cartomancy. 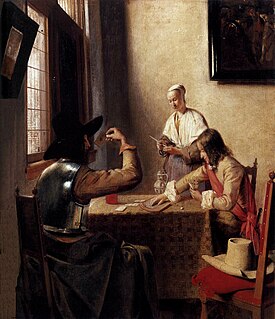 Krutzjass is a Swiss German trick-taking card game in some ways similar to Contract bridge. The name, literally translated into English, is Cross-Game, a name derived from the fact that it is played between two teams or partnerships of two, where team members sit opposite each other, with an opponent on either side. There are many variants of the game, however, this article deals primarily with the double-deck variant.

Backwash squeeze is a rare squeeze which involves squeezing an opponent which lies behind declarer's menace. A variation of this, known as the "Sydney Squeeze" or "Seres Squeeze", was discovered in play at a rubber bridge game in Sydney, Australia in 1965, by the Australian great Tim Seres; it was later attested by famous bridge theorist Géza Ottlik in an article in The Bridge World in 1974, as well as in his famous book Adventures in Card Play, co-authored with Hugh Kelsey. 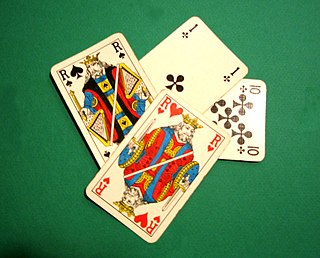 Twenty-eight, also called "twenty nine" in some places is an Indian trick-taking card game for four players, in which the Jack and the nine are the highest cards in every suit, followed by ace and ten. In Maharashtra state, this is also called as 304.

304, pronounced three-nought-four, is a trick-taking card game popular in Sri Lanka, coastal Karnataka, Tamil Nadu and Maharashtra, in the Indian sub continent. The game is played by two teams of two using a subset of the 52 standard playing cards so that there are 32 cards in play.

Bridge base basic, also known as BBO basic, is a bidding system for the game of bridge based on the Standard American Yellow Card (SAYC). It is simplified, suitable for beginners, and widely used in internet bridge, particularly on Bridge Base Online. It is taught in Fred Gitelman's educational software called Learn to Play Bridge that is available as a free download from the American Contract Bridge League's website. 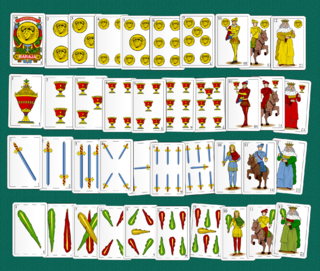 Julepe, , is a gambling card game of Spanish origin, similar to the English five-card Loo, and best for six players. It spread rapidly across the Spanish-American countries during the 19th century.

Five-card majors is a contract bridge bidding treatment common to many modern bidding systems. Its basic tenet is that an opening bid of one-of-a-major in first and second position guarantees at least five cards in that major. This method has become standard in North American tournament play, but European methods vary.

The Fool or The Jester is one of the 78 cards in a tarot deck. In tarot card reading, it is one of the 22 Major Arcana, sometimes numbered as 0 or XXII. However, in decks designed for playing traditional tarot card games, it is typically unnumbered, as it is not one of the 21 trump cards and instead serves a unique purpose by itself.