Trumpler 16 (Tr 16) is a massive open cluster that is home to some of the most luminous stars in the Milky Way galaxy. It is situated within the Carina Nebula complex in the Carina–Sagittarius Arm, located approximately 9,270  ly (2,842  pc ) from Earth. [1] The cluster has one star visible to the naked eye from the tropics southward, Eta Carinae.

Its most luminous members are Eta Carinae and WR 25 , with both having luminosities several million times that of the Sun, and there are three other extreme stars with O3 spectral classes. [2] Both Eta Carinae and WR 25 are binaries, with the primary stars contributing most of the luminosity, but with companions which are themselves more massive and luminous than most stars. Totalling all wavelengths, Eta Carinae is estimated to be the more luminous of the two, 4,600,000 times the Sun's luminosity (absolute bolometric magnitude -12) compared to WR 25 at 2,400,000 times the Sun's luminosity (absolute bolometric magnitude -11.2). However, Eta Carinae appears by far the brightest object, both because it is brighter in visual wavelengths and because it is embedded in nebulosity which exaggerates the luminosity. WR 25 is very hot and emits most of its radiation at ultraviolet wavelengths.

Trumpler 16 and Trumpler 14 are the most prominent star clusters in Carina OB1 , a giant stellar association in the Carina spiral arm. Another cluster within Carina OB1, Collinder 228, is thought to be an extension of Trumpler 16 appearing visually separated only because of an intervening dust lane. The spectral types of the stars indicate that Trumpler 16 formed by a single wave of star formation. Because of the extreme luminosity of the stars formed, their stellar winds push away the clouds of dust, similar to the Pleiades. In a few million years, after the brightest stars have exploded as supernovae, the cluster will slowly die away. Trumpler 16 includes most of the stars in the eastern portion of the Carina OB1 association. [13]

Gaia Data Release 2 provides parallaxes for many stars considered to be members of Trumpler 16. It finds that the four hottest O-class stars in the region have very similar parallaxes with a mean value of 0.383±0.017  mas . Many of the other supposed members show significantly different parallaxes and may be foreground or background objects. Therefore, the distance of Trumpler 16 is assumed to be around 2,600 pc, significantly further than the accurately-known distance of η Carinae. [14] 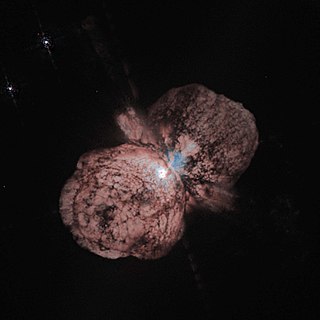 Eta Carinae, formerly known as Eta Argus, is a stellar system containing at least two stars with a combined luminosity greater than five million times that of the Sun, located around 7,500 light-years (2,300 parsecs) distant in the constellation Carina. Previously a 4th-magnitude star, it brightened in 1837 to become brighter than Rigel, marking the start of its so-called "Great Eruption". It became the second-brightest star in the sky between 11 and 14 March 1843 before fading well below naked eye visibility after 1856. In a smaller eruption, it reached 6th magnitude in 1892 before fading again. It has brightened consistently since about 1940, becoming brighter than magnitude 4.5 by 2014.

The Carina Nebula or Eta Carinae Nebula is a large, complex area of bright and dark nebulosity in the constellation Carina, and is located in the Carina–Sagittarius Arm. The nebula is approximately 8,500 light-years (2,600 pc) from Earth.

Luminous blue variables (LBVs) are massive evolved stars that show unpredictable and sometimes dramatic variations in both their spectra and brightness. They are also known as S Doradus variables after S Doradus, one of the brightest stars of the Large Magellanic Cloud. They are extraordinarily rare with just 20 objects listed in the General Catalogue of Variable Stars as SDor, and a number of these are no longer considered to be LBVs.

HD 93129 is a triple star system in the Carina Nebula, with all three components being hot O class stars amongst the most luminous stars in the Milky Way. It is the dominant member of the Trumpler 14 star cluster, a young star cluster within the Carina OB1 stellar association that harbors other super-luminous stars, like Eta Carinae and WR 25.

HD 93205, or V560 Carinae, is a binary stellar system, in the Carina Nebula in the constellation Carina. It consists of two massive O-stars that revolve around each other in 6 days.

HD 93250 is a highly luminous hot blue binary star in the Carina Nebula in the constellation Carina.

HR Carinae is a luminous blue variable star located in the constellation Carina. It is surrounded by a vast nebula of ejected nuclear-processed material because this star has a multiple shell expanding atmosphere. This star is among the most luminous stars in the Milky Way. It has very broad emission wings on the Balmer lines, reminiscent from the broad lines observed in the spectra of O and Wolf–Rayet stars. A distance of 5 kpc and a bolometric magnitude of -9.4 put HR Car among the most luminous stars of the galaxy.

WR 102ka, also known as the Peony star, is a Wolf–Rayet star that is one of several candidates for the most luminous-known star in the Milky Way.

S Monocerotis, also known as 15 Monocerotis, is a massive multiple and variable star system located in the constellation Monoceros. It is the brightest star in the Christmas Tree open cluster in the area catalogued as NGC 2264.

A hypergiant (luminosity class 0 or Ia+) is a very rare type of star that has an extremely high luminosity, mass, size and mass loss because of their extreme stellar winds. The term hypergiant is defined as luminosity class 0 (zero) in the MKK system. However, this is rarely seen in the literature or in published spectral classifications, except for specific well-defined groups such as the yellow hypergiants, RSG (red supergiants), or blue B(e) supergiants with emission spectra. More commonly, hypergiants are classed as Ia-0 or Ia+, but red supergiants are rarely assigned these spectral classifications. Astronomers are interested in these stars because they relate to understanding stellar evolution, especially with star formation, stability, and their expected demise as supernovae.

Cygnus OB2 is an OB association that is home to some of the most massive and most luminous stars known, including suspected Luminous blue variable Cyg OB2 #12. It also includes one of the largest known stars, NML Cygni. The region is embedded within a wider one of star formation known as Cygnus X, which is one of the most luminous objects in the sky at radio wavelengths. The region is approximately 1,570 parsecs from Earth in the constellation of Cygnus.

RT Carinae, also known as CD-58 3538, is a variable star in the Carina Nebula in the constellation Carina. It has a mean apparent magnitude of +8.55.

WR 25 is a binary star system in the turbulent star forming region Carina Nebula, about 6,800 light-years from Earth. It contains a Wolf-Rayet star and a hot luminous companion, and is a member of the Trumpler 16 cluster.

WR 24 is a Wolf-Rayet star in the constellation Carina. It is one of the most luminous stars known. At the edge of naked eye visibility it is also one of the brightest Wolf Rayet stars in the sky.

QZ Carinae is a multiple star system in the constellation Carina. It is the brightest member of the loose open cluster Collinder 228 and one of the brightest stars in the Carina Nebula. The apparent magnitude is variable from +6.16 to +6.49 with a period of 6 days.

Carina OB1 is a giant OB association in the Carina Nebula, which is home to some of the most massive and luminous stars in the Milky Way Galaxy. It includes the young star clusters Collinder 228, NGC 3293, NGC 3324, IC 2581, Trumpler 14, Trumpler 15 and Trumpler 16, the last being the home of Eta Carinae. It also includes another massive and luminous star, HD 93129A. It is approximately 2,680 parsecs (8,700 ly) from Earth.

CK Carinae is a variable star in the constellation Carina, the keel of Argo Navis. It is a member of the star association Carina OB1-D, at a distance of around 2,300 parsecs or 7,500 light years. 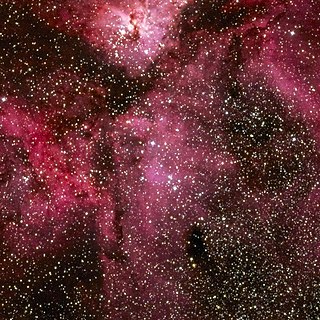 Collinder 228 is an open cluster within the southern part of the Carina Nebula NGC 3372, about 25' south of η Carinae. It is probably composed of stars which recently formed from the material in the nebula. QZ Carinae is the brightest member of Collinder 228 with an apparent magnitude between 6.16 and 6.49.