Trunajaya (Madurese) or Tronajâyâ, also known as Panembahan Maduretno (1649 – 2 January 1680 [1] ), was a prince and warlord from Arosbaya, Bangkalan, Madura, known for leading a rebellion against the rulers of the Mataram Sultanate on the island of Java.

Trunajaya was born in Madura. In 1674 he led a revolt against Amangkurat I and Amangkurat II of Mataram. [2] He was supported by itinerant fighters from Makassar led by Kraeng Galesong. [2] The Trunajaya rebellion moved swiftly and strong, and captured the Mataram court at Plered in mid-1677.

The Mataramish king, Amangkurat I, escaped to the north coast with his eldest son, the future king Amangkurat II, leaving his younger son Pangeran Puger in Mataram. Apparently more interested in profit and revenge than in running a struggling empire, the rebel Trunajaya looted the court and withdrew to his stronghold in Kediri, East Java, leaving Prince Puger in control of a weak court.

While on his way to Batavia in order to ask the Dutch for help, Amangkurat I died in the village of Tegalarum near Tegal just after his expulsion, making Amangkurat II king in 1677. [2] He too was nearly helpless, having fled without an army or a treasury to build one. In an attempt to regain his kingdom, he made substantial concessions to the Dutch East India Company (VOC) in Batavia, who then went to war to reinstate him. He promised to give VOC the port town of Semarang if they lent him troops. [2]

The Dutch agreed, since for them, a stable Mataram empire that was deeply indebted to them would help ensure continued trade on favourable terms. The multinational Dutch forces, consisting of light-armed troops from Makassar and Ambon, in addition to heavily equipped European soldiers, first defeated Trunajaya in Kediri in November 1678. Trunajaya himself was captured in 1679 near Ngantang west of Malang. He was executed by order of Amangkurat II in Payak, Bantul, on 2 January 1680.

The Trunajaya rebellion is remembered with pride as a heroic struggle by the Madurese people, against foreign forces of the Mataramish state and the Dutch VOC. Today his career is commemorated as the name of Trunojoyo Airport in Sumenep and Trunojoyo University in Bangkalan, Madura.

Madura is an Indonesian island off the northeastern coast of Java. The island comprises an area of approximately 4,078.67 km². Madura is administered as part of the East Java province. It is separated from Java by the narrow Strait of Madura. The administered area has a density of 702 people per km², while that of the island itself is higher at 817/km². 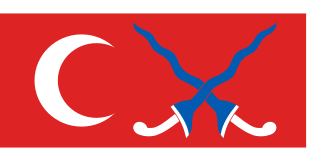 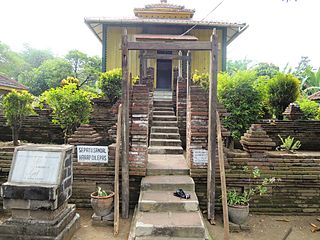 Amangkurat III was a short-lived ruler of Sultan of Mataram, reigned 1703-1705. 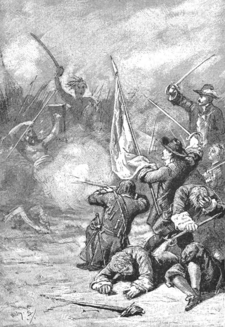 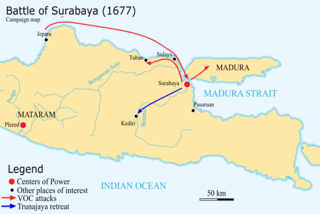 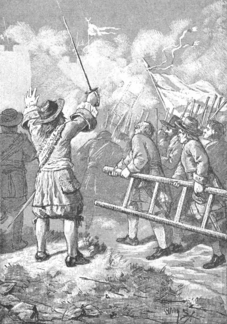 The Javanese Wars of Succession were three military confrontations between the Dutch East India Company (VOC) and the Mataram Sultanate on central Java between 1703 and 1755. The hereditary succession in Maratam was at stake, prompting the VOC to field its own candidates in an attempt to gain more influence in central and eastern Java. At the end of the Javanese Wars of Succession, Mataram was carved into three weak Vorstenlanden, independent in name only, as a consequence of the divide and rule policy of the VOC.