Trunk Island is the largest island in Harrington Sound, Bermuda. Its area is 7 acres (2.8 ha), and it contains two properties: a mansion plot (66%) and a cottage plot (33%). The island has been owned by the Tucker/Gardner family since the early 19th century and was used as a summer camp for Bermudian groups such as Sea Scouts and Girl Guides in the 1920s and 1930s. It remains privately owned by descendants of the first owners, although a share of the ownership of the mansion plot has now been donated to the Bermuda Zoological Society, which supports educational programs at the Bermuda Aquarium, Museum and Zoo. The Bermuda Zoological Society purchased the cottage property and has created a living classroom throughout the island. 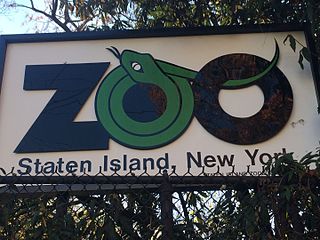 The Staten Island Zoo is an 8-acre (3.2 ha) urban zoo in West New Brighton, Staten Island, New York City. The zoo is open year-round except on Thanksgiving, Christmas, and New Year's Day. It has been accredited by the Association of Zoos and Aquariums (AZA) since 1988.

Ashley House is a 17th-century cottage located at 15 Railway Trail in the parish of Paget, Bermuda. The original structure is believed to date from circa 1650. The Government of Bermuda has classified Ashley House as a Grade One listed property, one of only 60 such properties in the entire British Overseas Territory. A Grade One listing is applied to properties that are of significant historic and/or architectural importance to the country.

The Bermuda National Trust is a charitable organization which works to preserve and protect the heritage of Bermuda.

The Hamilton Princess & Beach Club, A Fairmont Managed Hotel is one of the grandest and most famous hotels in Bermuda, located in Pembroke Parish just outside the City of Hamilton. It also happens to be the oldest hotel in the Fairmont chains. One of the largest in Bermuda, it has over 400 rooms. It is one of two Fairmont Hotels on the island, the second being the Fairmont Southampton, which was originally opened as the Southampton Princess.

Hamilton Parish is one of the nine parishes of Bermuda. It was renamed for Scottish aristocrat James Hamilton, 2nd Marquess of Hamilton (1589-1625) when he purchased the shares originally held in the Virginia Company by Lucy Russell, Countess of Bedford. 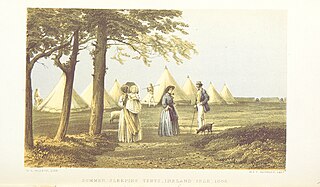 Ireland Island is the north-westernmost island in the chain which comprises Bermuda. It forms a long finger of land pointing northeastwards from the main island, the last link in a chain which also includes Boaz Island and Somerset Island. It lies within Sandys Parish, and forms the northwestern coast of the Great Sound. It is regarded as one of the six principal islands of Bermuda, and part of the West End of the archipelago.

The Great Sound is large ocean inlet located in Bermuda. It may be the submerged remains of a Pre-Holocene volcanic caldera. Other geologists dispute the origin of the Bermuda Pedestal as a volcanic hotspot.

Hawkins Island is a small island within Bermuda's Great Sound. It lies in the southeast of the sound, and is in the north of Warwick Parish. 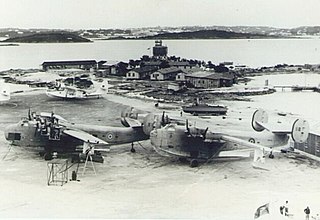 Darrell's Island is a small island within the Great Sound of Bermuda. It lies in the southeast of the sound, and is in the north of Warwick Parish. The island is owned by the Bermuda Government.

Cooper's Island is part of the chain which makes up Bermuda. It is located in St. George's Parish, in the northeast of the territory. 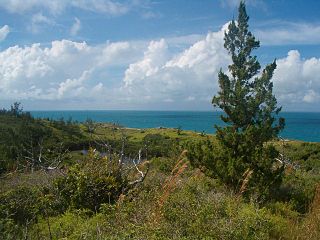 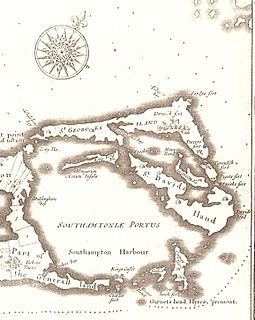 St. David's Island is one of the main islands of the British Overseas Territory of Bermuda. It is located in the far north of the territory, one of the two similarly sized islands that make up the majority of St. George's Parish.

Tobacco Bay is located in the far north of Bermuda. It lies on the Atlantic Ocean coast, close to the town of St. George's and to the historic Fort St. Catherine. One of Bermuda's national parks, it is a popular public beach. Snorkelling is a popular activity, as the bay has impressive underwater coral reefs, which explains its popularity with those who snorkel. 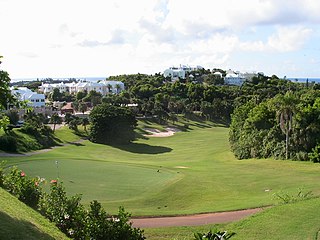 Tucker's Town is a small community in St. George's Parish, Bermuda at the mouth of Castle Harbour. It is the only part of the parish on the Main Island, and includes the Tucker's Town Peninsula that today is the site of many homes belonging to wealthy non-Bermudians. The most densely populated part of Tucker's Town was historically situated west of Tucker's Town Bay, and was almost entirely cleared to make way for golf links.

Montana was a paddle steamer that was wrecked off the north coast of Bermuda on 30 December 1863.

The State House (1620) in St. George's was the first purpose-built home of the House of Assembly, which then constituted the only chamber of the Parliament of Bermuda. Other than fortifications, it was Bermuda's first stone building. It is the oldest surviving Bermudian building, again excepting some fortifications, and has been used since 1815 as a Masonic lodge.

The BL 9.2-inch Mk IX and Mk X guns were British breech loading 9.2-inch guns of 46.7 calibre, in service from 1899 to the 1950s as naval and coast defence guns. They had possibly the longest, most varied and successful service history of any British heavy ordnance.

Gibbet Island is an island of Bermuda. It is located at the mouth of Flatt's Inlet which leads to Harrington Sound. Its name arises from the fact that runaway slaves were gibbetted, or hung here as punishment and a warning to passing maritime traffic. Flatt's inlet was not a major shipping route so the reason for hanging the slaves here was not for the benefit of incoming vessels but instead because locals didn't want to have hangings on the mainland due to superstition. Witches were also burned here.

The United States Naval Station Whites Island was a United States Navy (USN) facility located on White's Island in Hamilton Harbour, in the British Colony of Bermuda, 640 miles off the coast of North Carolina.

Admiralty House in Bermuda was the official residence and offices for the senior officer of the Royal Navy in the British Overseas Territory of Bermuda, originally the Commander-in-Chief of the North America and West Indies Station.