Trusler Sports Complex is a sports facility located in Emporia, Kansas. The complex consists of four fields – one baseball, three softball – and is home to the Emporia State baseball and softball teams. [1]

Central College is a four-year private liberal arts college located in Pella, Iowa, and affiliated with the Reformed Church in America and NCAA Division III athletics. The college was founded in 1853 and has been accredited by the Higher Learning Commission since 1942. Central has a student body of approximately 1,100 undergraduates and 73 academic programs. The college is noted for its emphasis on sustainability education, STEM, and global experiential learning, including varied study abroad programs.

The Emporia State Hornets football program is a college football team that represents Emporia State University, often referred to as "Emporia State" or "ESU". The team competes as a member of the Mid-America Intercollegiate Athletics Association (MIAA), which is a conference in the Division II of the National Collegiate Athletic Association (NCAA). The program began in 1897 and has fifteen conference titles. On December 15, 2006, former Hornet quarterback Garin Higgins became the team's 24th head coach, following the resignation of Dave Wiemers. Home games are played on Jones Field at Welch Stadium, located on the Emporia State University campus in Emporia, Kansas. In August 2017, Hero Sports named Emporia State the "best football team in Kansas, regardless of division."

Olga Mural Field at Schoonover Stadium is a baseball venue located on the campus of Kent State University in Kent, Ohio, United States. It is home to the Kent State Golden Flashes baseball team, a member of the National Collegiate Athletic Association (NCAA) in Division I and the Mid-American Conference East Division. The field opened in 1966 and was previously known as Gene Michael Field from 1990 to 2003. The field was renamed in late 2003 and renovated in 2005 with additional upgrades made from 2006 through 2008 and again in 2013 to 2014. It has a seating capacity of 1,148 people with a Shaw Sports Turf synthetic playing surface.

The Angelo State Rams, also known as ASU Rams, are the athletic teams that represent Angelo State University, located in San Angelo, Texas, in NCAA Division II intercollegiate sports. The Rams and Rambelles, or 'Belles, compete as members of the Lone Star Conference for all 12 varsity sports.

The Petersen Sports Complex (PSC) is a 12.32-acre (4.99 ha) multi-sport athletic facility on the campus of the University of Pittsburgh in Pittsburgh, Pennsylvania. It houses Charles L. Cost Field, Vartabedian Field, and Ambrose Urbanic Field, the respective home practice and competition venues of the university's NCAA Division I varsity athletic baseball, softball, and men's and women's soccer teams. Known as the Pittsburgh (Pitt) Panthers, these teams compete in the Atlantic Coast Conference. The complex is located adjacent to the school's Trees Hall and Cost Sports Center near the remainder of the university's other upper campus athletic facilities.

The Colorado State University–Pueblo ThunderWolves are the athletic teams at Colorado State University–Pueblo. The ThunderWolves are a member of the Rocky Mountain Athletic Conference. They were previously known as the University of Southern Colorado Indians and then the University of Southern Colorado ThunderWolves. The program includes 7 men's sports: baseball, basketball, football, golf, soccer, tennis, and wrestling. The women's program has 8 sports: basketball, cross country, golf, soccer, softball, tennis, volleyball and track. Dropped following the 1984 season, football returned in 2008 and the team posted a 4-6 record. The ThunderWolves won the 2014 NCAA Division II Football National Championship, its first in football program history, by blanking previously undefeated Minnesota State University, Mankato 13-0.

The Butler Grizzlies are the sports teams of Butler Community College located in El Dorado, Kansas, United States. They participate in the National Junior College Athletic Association (NJCAA) and in the Kansas Jayhawk Community College Conference.

The Emporia State Hornets basketball team represents Emporia State University in Emporia, Kansas, in the NCAA Division II men's basketball competition. The team is coached by Craig Doty, who is in his first season as head coach. The Hornets currently compete in the Mid-America Intercollegiate Athletics Association.

The President of Emporia State University is the chief administrator of the university. Each is appointed by and is responsible to the other members of that body, who delegate to him or her the day-to-day running of the university. The president of Emporia State is selected by the Kansas Board of Regents, the governing board for public universities in the state of Kansas, after a nationwide search. 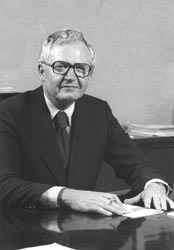 Thomas Walter Butcher was an American educator most notably for serving as president at what is now known as Emporia State University. Before serving as the Kansas State Normal School's president, Butcher served various state-level education administrator jobs.