Trust Bank Limited may refer to: 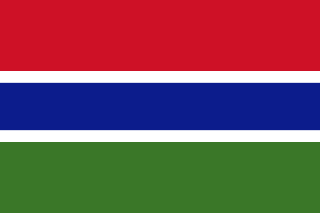 The Gambia, officially the Republic of The Gambia, is a country in West Africa that is almost entirely surrounded by Senegal with the exception of its western coastline along the Atlantic Ocean. It is the smallest country within mainland Africa.

Commerce Bank may refer to: 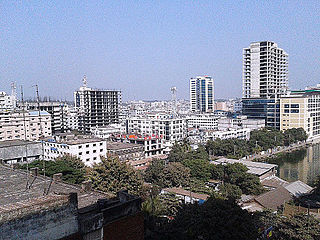 Agrabad is a downtown commercial and financial area in Chittagong, the second largest city of Bangladesh. Located close to the city's harbor, it hosts numerous Bangladeshi and international businesses, banks, financial institutions, and the other commercial entities. The Chittagong Chamber of Commerce & Industry, the World Trade Center and Chittagong Stock Exchange are most prominent of them. The area forms part of the Double Mooring precinct and is directly connected to the Port of Chittagong.

Prime Bank may refer to:

Dutch-Bangla Bank Limited (DBBL) is a bank in Bangladesh. DBBL is a scheduled joint venture commercial bank between local Bangladeshi parties by M Sahabuddin Ahmed and a Dutch company FMO. DBBL was established under the Bank Companies Act 1991 and incorporated as a public limited company under the Companies Act 1994 in Bangladesh with the primary objective to carry on all kinds of banking business in Bangladesh. DBBL commenced formal operation from June 3, 1996. The Bank is listed with the Dhaka Stock Exchange Limited and Chittagong Stock Exchange Limited.

The Grameen family of organizations has grown beyond Grameen Bank into a multi-faceted group of profitable and non-profit ventures, established by Muhammad Yunus, the Nobel Peace Prize winning founder of Grameen Bank. Most of these organizations have central offices at the Grameen Bank Complex in Mirpur, Dhaka, Bangladesh. The Grameen Bank started to diversify in the late 1980s when it started attending to unutilized or underutilized fishing ponds, as well as irrigation pumps like deep tubewells. In 1989, these diversified interests started growing into separate organizations, as the fisheries project became Grameen Fisheries Foundation and the irrigation project became Grameen Krishi Foundation.

Trust Bank Limited is a private commercial bank established in 1999 in Bangladesh. It is backed by Army Welfare Trust of Bangladesh Army. General Abu Belal Muhammad Shafiul Huq the chief of Bangladesh army is its chairman. It is one of the leading private commercial banks having a network of 92 branches, 7 SME Service Centers, 162 ATM Booths and 60 POS in 50 Branches across Bangladesh and plans to open few more branches to cover the important commercial areas in Dhaka, Chittagong, Sylhet and other areas in 2013.

Industrial and General Insurance (IGI) is an Nigeria insurance company and is a major provider of insurance and risk management services in West Africa. It has subsidiaries, in Ghana, the Gambia, Rwanda and Uganda and a representative offices in London and Washington, DC.

Bangladesh Army Welfare Trust is a trust owned and operated by Bangladesh Army. It owns a number of businesses including hotels and Gas station and golf clubs.

United Commercial Bank Ltd (UCB) is one of the largest private sector commercial bank in Bangladesh.

The Government agencies in Bangladesh are state controlled organizations that act independently to carry out the policies of the Government of Bangladesh. The Government Ministries are relatively small and merely policy-making organizations, allowed to control agencies by policy decisions. Some of the work of the government is carried out through state enterprises or limited companies.

Community Bank Bangladesh Limited is newly approved Scheduled Bank of Bangladesh. This bank is fully owned by Bangladesh Police Welfare Trust. Masihul Huq Chowdhury is the CEO and Managing Director of the Bank.