Trust certificate may refer to:

HyperText Transfer Protocol Secure (HTTPS) is an extension of the Hypertext Transfer Protocol (HTTP). It is used for secure communication over a computer network, and is widely used on the Internet. In HTTPS, the communication protocol is encrypted using Transport Layer Security (TLS) or, formerly, its predecessor, Secure Sockets Layer (SSL). The protocol is therefore also often referred to as HTTP over TLS, or HTTP over SSL.

X.500 is a series of computer networking standards covering electronic directory services. The X.500 series was developed by the Telecommunication Standardization Sector of the International Telecommunications Union (ITU-T). ITU-T was formerly known as the Consultative Committee for International Telephony and Telegraphy (CCITT). X.500 was approved first in 1988. The directory services were developed to support requirements of X.400 electronic mail exchange and name lookup. The International Organization for Standardization (ISO) was a partner in developing the standards, incorporating them into the Open Systems Interconnection suite of protocols. ISO/IEC 9594 is the corresponding ISO identification.

A public key infrastructure (PKI) is a set of roles, policies, hardware, software and procedures needed to create, manage, distribute, use, store and revoke digital certificates and manage public-key encryption. The purpose of a PKI is to facilitate the secure electronic transfer of information for a range of network activities such as e-commerce, internet banking and confidential email. It is required for activities where simple passwords are an inadequate authentication method and more rigorous proof is required to confirm the identity of the parties involved in the communication and to validate the information being transferred. 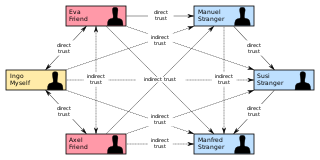 In cryptography, a web of trust is a concept used in PGP, GnuPG, and other OpenPGP-compatible systems to establish the authenticity of the binding between a public key and its owner. Its decentralized trust model is an alternative to the centralized trust model of a public key infrastructure (PKI), which relies exclusively on a certificate authority. As with computer networks, there are many independent webs of trust, and any user can be a part of, and a link between, multiple webs.

In cryptography, a certificate revocation list is "a list of digital certificates that have been revoked by the issuing certificate authority (CA) before their scheduled expiration date and should no longer be trusted".

In cryptography, a trusted third party (TTP) is an entity which facilitates interactions between two parties who both trust the third party; the Third Party reviews all critical transaction communications between the parties, based on the ease of creating fraudulent digital content. In TTP models, the relying parties use this trust to secure their own interactions. TTPs are common in any number of commercial transactions and in cryptographic digital transactions as well as cryptographic protocols, for example, a certificate authority (CA) would issue a digital identity certificate to one of the two parties in the next example. The CA then becomes the Trusted-Third-Party to that certificates issuance. Likewise transactions that need a third party recordation would also need a third-party repository service of some kind or another.

The BPI Limited, commonly known as the British Phonographic Industry or BPI, is the British recorded music industry's trade association.

GlobalSign is a WebTrust-certified certificate authority (CAs) and provider of Identity Services.

The Energy Saving Trust Recommended logo was a UK-based labelling and certification scheme for energy efficient products. A product that displays the logo shows that it met strict criteria on energy saving. The scheme was run by the Energy Saving Trust and was launched in 2000. The logo is registered with the UK Patent Office and could be used by manufacturers, retailers and suppliers to signpost consumers to best-in-class energy efficient products.

Drugs.com is an online pharmaceutical encyclopedia that provides drug information for consumers and healthcare professionals, primarily in the USA.

DigiNotar was a Dutch certificate authority owned by VASCO Data Security International, Inc. On September 3, 2011, after it had become clear that a security breach had resulted in the fraudulent issuing of certificates, the Dutch government took over operational management of DigiNotar's systems. That same month, the company was declared bankrupt.

Convergence was a proposed strategy for replacing SSL certificate authorities, first put forth by Moxie Marlinspike in August 2011 while giving a talk titled "SSL and the Future of Authenticity" at the Black Hat security conference. It was demonstrated with a Firefox addon and a server-side notary daemon.